It is difficult to find a person who does not like such a sweet and extremely juicy fruit as watermelon. Although botanists consider it a berry. Therefore, the idea of ​​celebration is not at all surprising World Watermelon Day, which falls on August 3. This date is also not accidental, because it is then that the peak of berry harvesting is observed. In 2022, World Watermelon Day will be celebrated on Wednesday, August 3.

All holidays and events for August 3

How did the idea to celebrate World Watermelon Day come about?

There are no reliable data on the implementation of this holiday. However, it is a generally accepted fact that Americans began to celebrate World Watermelon Day. In the United States, no summer party or picnic is complete without this berry. The incredible sweet taste, fresh juiciness and low calorie content made watermelon the most favorite berry for the majority of the Earth’s population. So it’s no surprise that it deserves its own international day.

South Africa is officially considered the homeland of this miracle berry. Since ancient times, watermelon has been grown in South Africa, Namibia, Botswana, etc. The ancestor of this culture is considered to be colocinite and tsama melon, which is quite often found in the Kalahari desert, located in the central part of South Africa. Melon tsama still plays an important role today – it quenches the thirst of the Bushmen.

The latest genetic studies, dated 2021, indicate that the watermelon is not a native of South Africa, but of its northeastern part. And the wild ancestor of the berry grows in Sudan.

Watermelon in the Ancient World

The cultivation of watermelons as a cultural plant began as early as the ancient Egyptians. Evidence of the popularity of this plant are watermelon seeds found in buildings of the 12th dynasty era, which ruled in ancient Egypt as early as the 20th century BC. Watermelons were placed in the tombs of pharaohs, as they symbolized well-being and a source of food in the afterlife. By the way, the seeds of this berry were found in the tomb of Pharaoh Tutankhamun.

Watermelons are painted on the walls of Egyptian tombs, and medicinal recipes with this ingredient are recorded on ancient papyri. Two mutations were found in the DNA of watermelon seeds found in New Kingdom burials more than 3,000 years ago. In one, the gene responsible for the red pigment was absent, in the second – for the presence of cucurbitacins, which give a bitter aftertaste. In terms of their genetic composition, cultivated watermelons are closest to Kordofan watermelons, which have juicy, but not pink, but white flesh (cordophanus). Today, a similar culture is grown in Sudan. This indicates that the culture spread to the north along the banks of the Nile, gradually its properties improved, including the change in the color of the pulp to pink.

In ancient Egypt there were many legends and myths dedicated to this juicy culture. In one such legend, it is said that the watermelon appeared from a man’s seed, which was scattered by the god Set in the hope of luring the goddess Isis.

This berry is also mentioned in Virgil’s poetry, which indicates that the ancient Romans also grew this berry. In Rome, they liked to eat watermelon in fresh and salted form, and the Romans often enjoyed watermelon honey.

In the 5th century, watermelon “migrated” to Asia, where the inhabitants of China nicknamed it “melon from the West.” The first celebrations dedicated to watermelons began there. For the Arabs, watermelons were a very important dish, as they believed that the berry cleanses the body of impurities and diseases if consumed before each meal.

This culture entered medieval Europe thanks to the Crusades, which were held repeatedly at that time. The English began growing watermelons at the beginning of the 17th century. However, due to the fact that the natural conditions of England did not meet the requirements of this heat-loving culture, they had to be grown in greenhouses and greenhouses.

Until the second half of the 17th century, watermelons were brought to Ukraine from southern countries. They were not consumed raw, but prepared from them in various dishes with spices. Today, watermelons are grown in the south of the country – in Odesa, Mykolaiv and Kherson regions.

It was not for nothing that humanity supported the idea of ​​celebration World Watermelon Day. After all, this culture is not only extremely tasty, its nutritional and medicinal properties are valued no less. Since ancient times, it has been believed that watermelon cleanses the body and enriches it with valuable vitamins and trace elements. Scientists have proven that regular consumption of this berry will bring many benefits to human health.

IN watermelon contains a lot of vitamin B9 (folic acid). Hematopoietic processes depend on it, and it also prevents the occurrence of liver diseases. Folic acid is also responsible for the formation of fetal nerve cells in pregnant women.

Therefore, it is important to consume watermelon both for general maintenance purposes and during pregnancy.

Due to its high liquid content, watermelon has a unique diuretic effect. Doctors have proven the following fact: if a person consumes up to 2 kg of watermelon a day before meals for a week, his kidneys will be cleansed of sand, freed from bile stagnation. As a result, the work of the digestive system will improve, and therefore the general condition and even the color of the face.

Thanks to the large amount of fiber contained in this berry, excess cholesterol is removed from the body, and this prevents the appearance of atherosclerosis.

Watermelon allows you to “deliciously” lose weight, it can be consumed on unloading days, arranging a “watermelon diet” for yourself.

How to celebrate World Watermelon Day?

IN World Watermelon Day we advise you to buy some huge ripe berries and make a party for yourself and your friends.

How to choose a ripe watermelon?

In order to buy a really sweet ripe watermelon, you need to pay attention to the sound that occurs when you pat it with your palm. He must be deaf. You should also not buy a cracked fruit, because it will not lie for a long time. An uncut watermelon can be stored for up to two weeks in the refrigerator, but if you have already cut it, it is advisable to eat it within a day.

Do not be afraid to eat early watermelons, because of the alleged presence in them of a large proportion of nitrates, because nitrates are found in all plant foods. Nitrates are salts of nitric acid, which are part of many plants, soil, and our body is no exception. Their content in plants, including watermelons, depends on many factors: the soil, the amount of fertilizers and light, water, and even the time of day when the plant was picked. But nitrates are not poison, and in safe amounts they are not dangerous. Moreover, they are necessary for the normal functioning of our body. And in watermelons there are not many of them compared to other plants.

When will we celebrate World Watermelon Day?? 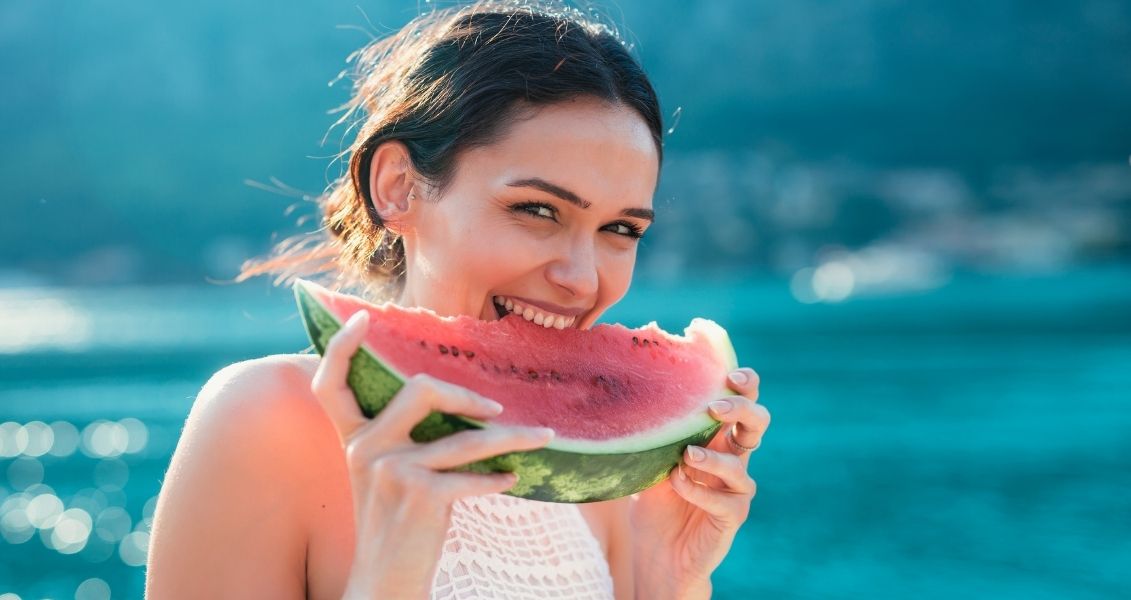 Proclamation Day of the Italian Republic