WhenIsHoliday.com
Home Afrika 🎓 Days of the Week in Swahili in 2022 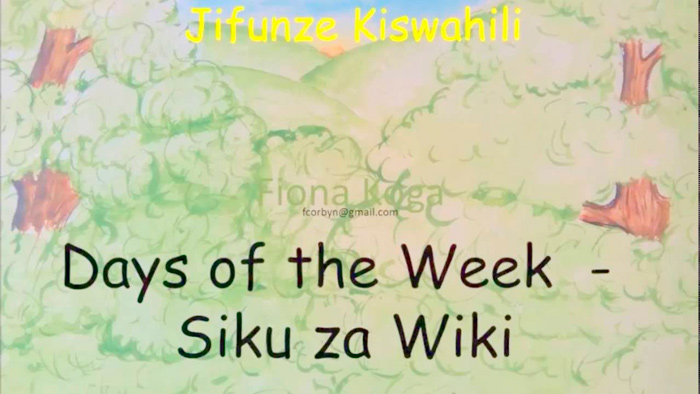 Hakuna matata! Have you ever heard this amazing phrase? – As a rule, a lot of contemporary people, both men and women, answer “yes,” and in fact this positive reply is not a great surprise. The exclamation has become popular all around the planet thanks to the famous cartoon called “Timon and Pumbaa”.

Up to the present moment, it has been appreciated a lot by children and adults in many corners of the world. However, not everybody knows that initially it wasn’t just an invention of the authors of the funny animated series. The phrase does really exist in the Swahili language. Are you interested?

Join us and we will tell you about this direction in details.

By the way, the phrase mentioned above can be translated like “No Problem”. Have you known it? – Usually people become very surprise to find out this piece of information. The fact that you have learnt the expression in one of the oldest languages on the planet seems to be terrific.

The citizens of the USA and Europe sometimes find Swahili to be rare. However, it is nothing but a typical mistake. It is used by a huge amount of people, who live in Africa.

Following the specialists, Swahili is considered to be one of the Bantu languages of African origin. However, some hints of Arabic are also present. In general the experts are sure that Arabic language has had a significant influence on the Swahili. But at the same time this African language has already adopted many words from European ones: English, German and Portuguese.

History of the Language Appearance

The Swahili language is considered to be a relatively old language. Following the documents it appeared approximately in the 12-13th centuries. Initially it was a complex of so-called urban Koine, which was formed as a result of the process of creolization of the local Bantu languages. It hadn’t happened without the close contact with more popular Arabic language. The last one came to the East African territories with numerous traders and explorers.

However, until the first part of the 19th century this language was not used widely outside its own borders.

Up to the present moment, the native speakers are represented by people, who are a part of a mixed Islamized Afro-Arab population inhabited the area of East African coast. The amazing thing is that there are no any local men and women, who consider Swahili to be their native language. And it is a real advantage. Why? – The matter is that nowadays it is thought to be an ethnical one, i.e. politically neutral. Swahili is a convenient mean of communication in East and Central Africa. There are no conflicts and wars because of it.

Its penetration into the depths of the continent began in the first half of the 19th century. At those times the territories were inhabited by a huge amount of various ethnic groups, which have their own languages and dialects, of course. In fact it happened because of curious merchants and hard-working slave traders, who came from the ocean coast. Later later missionaries and colonial officials came there as well to perform a mission. All of them spoke Swahili.

Local ethnic groups accepted the proposed means of communication. And it became the official language of Islam, Christianization as well as colonial administration. For them it was rather convenient to use the so-called “nobody’s” language.

Countries Where You Can Meet Days of Week in Swahili

Frankly speaking, at the first sight it is difficult to believe, but the general amount of these language speakers is 90 Million people worldwide. It sounds terrific, doesn’t it? However, a significant part of them uses it just from time to time. That means, that Swahili is not their main language of communication. It is considered to be the official one only in two countries on the planet: in Tanzania and in Kenya.

But you can hear and read it in Burundi, Comoros, Democratic Republic of the Congo, Mayotte, Mozambique, Rwanda, Somalia and Uganda.

Moreover, we should mention that Swahili has a great amount of dialects. For example, in Nairobi they speak the Sheng one, which is a so-called hybrid of Swahili and modern English. This dialect was originally the main mean of communication of Nairobi’s urban youth, but today it is spreading rapidly across two other regions, represented by Tanzania and Uganda.

Up to the present moment this means of communication is most widespread in Tanzania, where it functions as a supra-ethnic language with the widest possible range. For example, it serves as the working language of parliament, local courts and authorities, army, police, church. Radio broadcasting is carried out on it as well. Nowadays the national literature is also formed. The press is still developing.

In Tanzania Swahili is the only language in primary school. It coexists freely with English.

Swahili is a typical Bantu language with phonetics characteristic of this language family. The main difference between the phonological system, is the absence of phonological tones.

It is dominated by open syllables, consisting of one consonant and one vowel sound. The sonorous consonants [m] and [n] can be syllabic. It is very rare to find syllables ending in a consonant or having a combination of several consonants. Vowels do not differ in longitude-brevity.

Literary Swahili has five vowel phonemes: ɑ, ɛ, i, ɔ, u. The sound corresponding to the phoneme [u] in the alphabet of the International Phonetic Association is pronounced between [u] and [o]. The pronunciation of vowels does not depend on the stress of the syllable. There are no diphthongs in the language.

A typical phenomenon is prenasalization (initial pronunciation “in the nose”) of consonants. Also, Swahili is characterized by aspiration borrowed from Arabic when pronouncing velar consonants.

For example, the Days of Week in Swahili look like:

The manner of their reading is similar to the English rules, so usually there are no problems with it.

Why Should You Learn Days of Week in Swahili?

Let’s take a look at the facts: why is it worth learning days of weeks in Swahili? – You have already understood that this language is widespread in Africa. So this is one of the reasons if you are going to visit the southern part of the mainland.

However, now let’s go through the rest of the points: