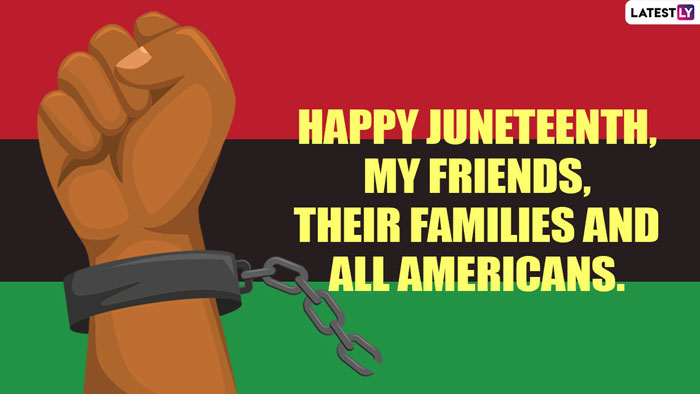 When is National Happy Juneteenth in 2022? – Are you ready to answer this question immediately and without any hesitations? Well, we are predicting your negative reply and, frankly speaking, it is not a real surprise for us. Why? – You see, the matter is that this special occasion has been created quite recently, so not everybody has already found out this fact. Today we are going to represent you something new. Are you ready? We are starting.

Talking about the matter what day Happy Juneteenth in 2022 is, we can’t but mention the historical background of the event. You see, the most part of our followers are usually happy to know when and by whom the holiday was established. And this event is not an exception, of course.

By the way, the special occasion is considered to be quite new, as it was launched by the new President. Following the recent report, the end of American slavery is going to become a quite new national special occasion in the USA.

The Head of the State Joe Biden has already signed a corresponding decree. By it, June 19 was declared the day off. The holiday becomes America’s eleventh federal holiday together with Christmas, Thanksgiving, and Independence Day.

Reporting at the official ceremony, Vice President Kamala Harris declared that remembering the history of the slavery abolition and the pogroms in Tulsa, the contemporary Americans have to learn lessons, as well as to teach children, as those events were a significant part of the national past.

The corresponding bill was introduced to Congress. We can’t but mention that initially it was an idea of the Texas Democratic spokeswoman. The lady called slavery as an America’s original sin. The fact is that the Congress unanimously supported the bill. This special occasion has already been a well-known holiday in many American states.

What does Happy Juneteenth mean? – As you perhaps understand we can’t answer this question instead of you. Why? You see, the matter is that we are not able even to predict your attitude to this special occasion.

However, we are sure that your reaction depends on the place where you are living now. In the USA this holiday is thought to be rather essential as local people know quite well about the importance of the date for the country. But in the rest part of the planet, men and women do not usually mind.

The official day for the abolition of the American slavery is June 19, 1865. On this day, two months after the official ending of the severe Civil War (1861-1865), the particular emancipation proclamation was read in Taxis, which was the last of the Southern Confederation. The document was issued at the height of the war on January 1, 1863 by Abraham Lincoln, but did not enter into force due to resistance from the southern states. In December 1865, the slavery abolition throughout the United States was enshrined in the Constitution.

The debate over the responsibility for slavery in the United States reignited in 2020 during a protest movement against racism and police violence dubbed BLM (Black Lives Matter).

As you perhaps understand the question “When is International Happy Juneteenth 2022?” is as not easy as it may seem from the first sight. Why? – You see, it contains a lot of various facts and the most part of them are going to be rather amazing.

For example, not everybody knows that the American state of Virginia became the very first colony of England which received a significant amount of African slaves. It happened in the very beginning of the 17th century. However, the so-called “slavery end” was also founded at that territory too. In May 1861, a month after the starting of the well-known Civil War, in which 11 states of the slave-owning South opposed the industrial North, three Virginia slaves belonging to the Confederate Army fled to Fort Monroe that was a military stronghold in Port Hampton. At that time the territory was controlled by the federal government.

The slaves asked the Federation army to provide them with secure shelter. Commander-in-Chief General Benjamin Franklin Butler declared the fugitive slaves “spoils of war” for the Federation forces – an inhuman term, at first glance, allowed them to keep the fugitives and help them.

Thus, thousands of African Americans gained freedom. Many of them managed to escape from the South to Fort Monroe during the war. Following the contemporary historians it was this event that laid the ground for the subsequent slavery abolition.

Scientists have tried to reconstruct a picture of the American past using the DNA of more than 50 thousand people from the Americas, Western Europe and the Atlantic coast of Africa. It turned out that this method is not less effective than historical documents and other evidence. It has been able to inform about where the real homeland of African Americans is.

When is Happy Juneteenth in 2022, calendar will surely remind you. And you may also understand it from the name of the special occasion itself. It is not rather difficult to find out, isn’t it? The special occasion has a fixed date, so you may join its celebration any moment you would like to do it.

As it has been already mentioned above, the holiday is considered to be quite new. Thus, there have been no any stable traditions for it yet.

The event is official, so it is celebrated with meetings, parades and demonstrations. This part of American history deserves recognition. On July 19th, you may visit numerous lectures, seminars and gatherings organized by local museums, libraries and public organization. You will get a lot of interesting information there.

If it is not impossible, devote this day to discovering something new in this direction. Fortunately, now there are many media sources for this purpose. It is up to you to choose.

Well, you have already known the answer to the question “What is the date of Happy Juneteenth?”, but we are going to amaze you even more.

As you know, during the entire time of the so-called transatlantic slave trade, 12.5 million people were forcibly removed from the west coast of Africa. They were sent to different countries: someone to South America, someone to the British colonies in the Caribbean, and someone to the current territories of the United States.

A new genetic study has shown that far more African Americans are of Nigerian ancestry today than historical records suggest. As the scholars explain, it is all about the routes of the slave trade, which did not always directly connect the current Nigeria with the current United States. In many cases slaves taken out of Nigeria were first brought to the Caribbean, and from there to America, which is difficult to track solely through port logs, as historians did.

But slaves were brought to Latin America mainly from West-Central Africa, present-day Senegal, Gambia and the territories of the Gulf of Benin. This was also confirmed by new genetic data. However, the genome of Senegalese and Gambians is practically not observed in the DNA of modern African Americans. The researchers thought about this phenomenon, compared the existing data and at last explained this by the fact that people from these regions were usually used on rice plantations, where they very quickly died of malaria. They just didn’t have time to have children.

Scientists also found that although slave traders tried to export and sell mainly male slaves, women made the greatest contribution to the genetic code of modern slave descendants.

In the USA and some areas of the former British Caribbean colonies, the influence of women is one and a half or even two times larger than that of men. In Latin and Central America in its turn it is as much as 13-17 times bigger. The fact is that male slaves often died in the young age from hard work and disease, and demanded abundant offspring from women in order to “reproduce” the new labor force.

When is Emancipation Day 2020