Unfortunately, our life is arranged in such a way that during it it is impossible not to experience injustice and not receive emotional wounds. At the same time, we ourselves often do wrong things, and then seek forgiveness from loved ones, friends or acquaintances. To repent and be forgiven is a great relief, but to forgive yourself is sometimes difficult. But it is even more difficult to carry resentment, anger or thoughts of revenge, besides, these feelings destroy both psychological and physical health. In order for as many people as possible to understand how important it is to be able to sincerely forgive and learn how to do it, there is a special holiday — World Forgiveness Day. It is celebrated every year on August 27, but there are other dates, such as July 7 or the first Sunday of August.

All holidays and events for August 27

How did the idea to celebrate World Forgiveness Day come about?

In almost all world religions, forgiveness is one of the main postulates. Some of the beliefs emphasize the forgiveness of human sins by God, others call people to forgive each other, and there are those that do not recognize a particular difference between God’s and human forgiveness.

According to Christian teaching, forgiving others is one of the spiritual duties of a believer. God is considered to be the original source of forgiveness, which thanks to the sufferings of Jesus Christ, every repentant sinner can receive. In response to God’s forgiveness, Christians are also expected to forgive one another—the Lord’s Prayer explicitly states that our own forgiveness depends on our ability to forgive others. In Christianity, God forgives both sins against him and evil done to other people.

In the church tradition, it is customary to receive forgiveness through a priest with the help of special rituals, such as confession and atonement. The main Christian book – the Bible – pays a lot of attention to forgiveness. It is enough to recall the well-known stories about the prodigal son, as well as about Joseph, who forgave his brothers for selling him into slavery. After all, Jesus himself, crucified on the cross, asked God to forgive his executioners.

In Judaism, if the wrongdoer sincerely repents, the believer must forgive him. But in the case when there is no repentance, religion does not oblige to forgive. In addition, unlike Christianity, in this religion a person cannot receive forgiveness from God for the evil he has done to other people – God only forgives sins before him. That is, the offender must receive forgiveness both from his victim and from God for violating his commandments.

Islam teaches that depending on the type of evil committed, forgiveness can be obtained either directly from Allah or from other people. However, in some cases, the Koran allows the possibility of punishing the offender – in the case of defending one’s faith, life or property. Therefore, religious debates about when to forgive and when to actively defend and take revenge continue among Muslims.

In Buddhism, forgiveness is seen as a means of preventing harmful emotions. Feelings of hatred and resentment are considered to affect the mind and destroy well-being, besides, according to the law of karma, the offender is an unhappy person, so there is no point in taking revenge on him – it is better to forgive. Furthermore, Buddhism questions the very reality of the passions that cause the need for forgiveness, emphasizing positivity and equanimity.

The concept of atonement for wrongdoing and receiving forgiveness is an integral part of Hindu teachings. It is also related to the concept of karma — that is, inevitable responsibility for all one’s actions and any harm that a person causes to other people. At the same time, forgiving is not considered a weakness, on the contrary, it is a sign of strength, and the ability to do this characterizes a person born to realize the divine state.

Philosophers and psychologists about the ability to forgive

Thus, forgiveness has long been a major aspect of faith, although philosophers have also tried to justify this phenomenon. At the same time, there were those who considered the ability to forgive a vice, not a virtue. For example, Aristotle argued that people who do not feel anger towards unworthy people are simply stupid. Nietzsche wrote that one should not forgive only those who are unable to do so themselves. Mahatma Gandhi believed that only the weak in spirit could not forgive, because forgiving is much more generous than punishing.

At the end of the 20th century, forgiveness attracted the attention of psychologists and educators. The very definition of forgiveness as a process appeared, and research began to show that people who forgive grudges are usually happier and healthier than those who carry them for a long time. A number of psychologists have developed models of forgiveness, including step-by-step methods that allow you to learn to forgive gradually. The most popular of such methods belong to Robert Enright and Everett Worthington. The first developed a method of forgiveness of 20 consecutive actions, the second created the so-called “pyramid of forgiveness.”

In the 1990s, after a number of significant events, such as the fall of communism, the election of Nelson Mandela as the president of South Africa, the weakening of the conflict in Northern Ireland, the world began a new era in which forgiveness gained special importance. As a result, relevant national and international events appeared – in 1994, the World Day of Forgiveness was founded in Canada by the “Messengers of Christ” organization. At first, the holiday was celebrated on August 27, and soon the event was moved to July 7, but in a number of countries the date of celebration remained unchanged. There is also an International Day of Forgiveness, established in 1996. This event was established by the World Alliance of Forgiveness, headed by Robert Plath, and is celebrated on the first Sunday of August.

What is the definition of forgiveness given by modern psychologists?

Forgiveness is the mental, emotional, and spiritual process of letting go of resentment, resentment, or anger toward another person for their actions or words. Also, forgiveness can be perceived in the sense of renouncing the demand for punishment or compensation for guilt. Forgiveness is usually motivated by religion, philosophy, compassion, and pragmatism.

Do forgiveness and justice go hand in hand?

These are two different concepts, but they have common features, because they are based on understanding people’s actions. But at the same time, forgiveness is based on personal feelings, and justice is based on societal standards. Like the ability to forgive, the desire for justice is also worthy of respect, as long as it does not have an ulterior motive for revenge.

What is better — to forgive the offender or to simply treat him neutrally?

A neutral position towards the person who caused suffering can only indicate a devaluation of one’s own feelings or a contemptuous attitude towards the offender’s personality. Instead, when we forgive, we acknowledge the person’s responsibility for their actions and at the same time show generosity.

Should we, forgiving, forget about the incident that caused it?

To forgive does not mean to forget the injustice done to oneself. On the contrary, particularly unpleasant and painful cases should be remembered in order to prevent their repetition in the future. At the same time, forgiveness helps to accept what happened and move on with life.

What to do if a person does not accept an apology and categorically does not want to forgive?

In no case should you take back your apology, be offended for it or start a new round of conflict. After all, people don’t have to forgive anyone at all, or they may need more time to do so. One way to solve the problem can be to take real action to make amends, if of course it is possible.

How to celebrate World Forgiveness Day?

Postcards for the Day of Forgiveness 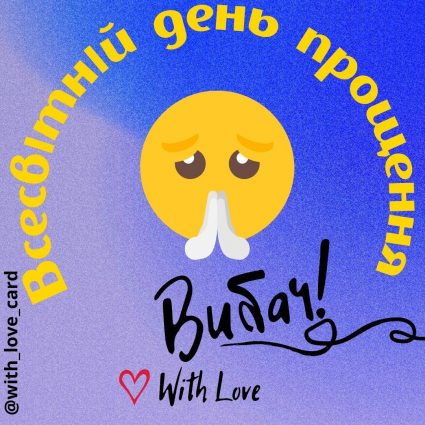 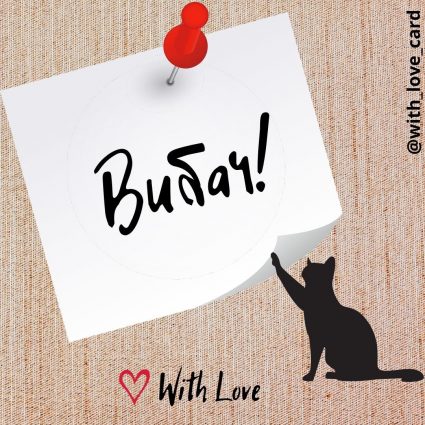 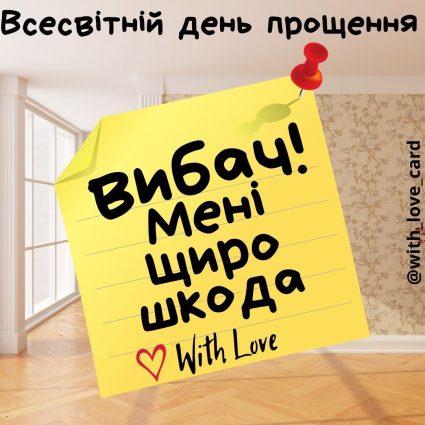 First of all, this event makes you think about the very concept of forgiveness and understand what it really means. It is important to know that forgiveness is not condoning crimes and not justifying bad deeds, nor is it forgetting them. Forgiveness does not necessarily mean entering into friendly relations with the former offender. In fact, it is a conscious choice aimed at obtaining peace of mind and the opportunity to live a full life.

World Forgiveness Day reminds us that we all live in an imperfect world and surrounded by imperfect people, but each of us has a task to develop our personality and improve, so learning to forgive is an important step towards this goal. And although forgiveness cannot change the unpleasant past, it strangely frees us from it and allows us to feel the beauty of the present moment.

When will we celebrate World Forgiveness Day?? 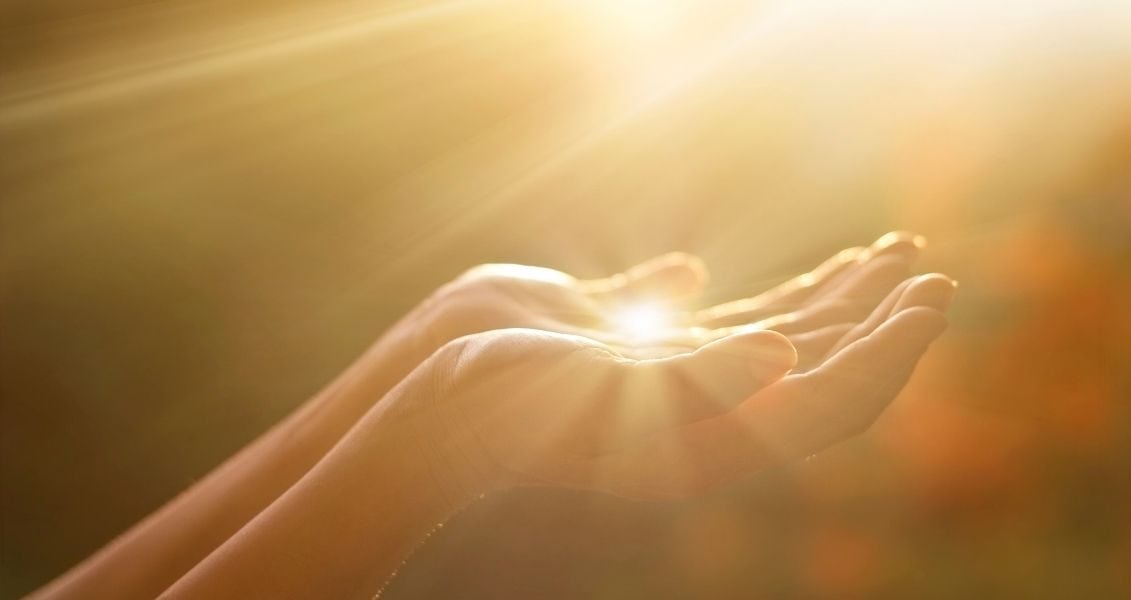