WhenIsHoliday.com
Home America 👭 When is National Sister in Law Day 2022 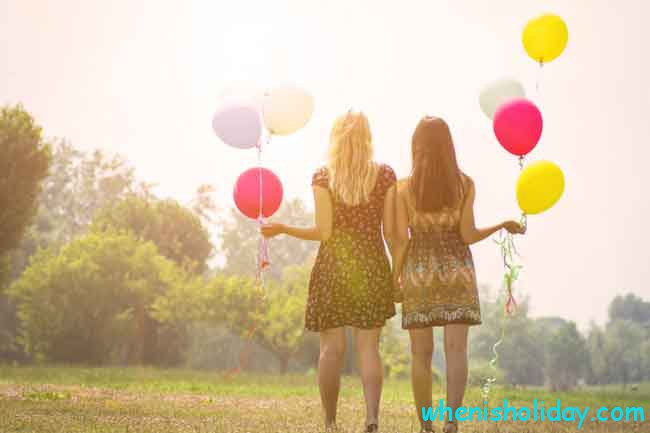 She might be the weirdest and, probably, the most unwanted person in your life. But you have to put up with her as she suddenly became the full member of your family. She is your sister-in-law. And not everything runs smooth between you two. That’s why there was a quirky holiday invented.

When is National Sister in Law Day in 2022? Well, let’s see what we’ve found about the issue!

In fact, the story about the origin of the date is really unusual. First, there are no official records of the date or even the smallest mention on the websites dedicated to the enumeration of all possible holidays on this planet. Second, there is no any certain date on which the celebratory activities might be staged. And third, it’s started from YouTube! How many holidays do you know that were born as a result of a video loaded on YouTube? For us, this one is the first.

Well, the initiators are two real sisters-in-laws who once came up with the idea of filming the short mini-movies for fun about the difficult relationships between the sisters-in-laws (how could there even be two of them?). Their life is the absolute competition – who would drink the glass of water faster? And who would be the most loving aunty for their nieces? The episodes are about two minutes long but they are full of jokes and laughter, check it out when your lunch is on!

Okay, back to the holiday, in one of the episodes, the sisters sat at the table and discussed the unbelievable point that there are Barbie and Ken National holidays but no observances in honor of the sisters-in-laws. One word leading to another, the women resolved that from now and on, there will be the official Sister-in-Law holiday.

Alas, but they forget to specify on which exact date the festivity is to be held. So, when is International Sister in Law Day 2022 is rather the question without an answer!

What does National Sister in Law Day mean? No matter all the ridiculousness of the relations between the heroines of the YouTube show, the holiday means looking deeper into your relationships with the real sister-in-law.

It is indeed a frequent problem – the relations between you and the sister of your husband. And the root ofit is probably in the jealousy. Between the siblings, especially if there is the decent age difference, the close connections are formed. For example, if the sister is older than the brother, she may feel like treating him as a mother. The sister-in-law might become the number one enemy for the wife if she is not allowed to treat the brother as before.

If thepoint is really in the jealousy, the wife has to be attentive towards the family relations and should not even try to ruin them or turn the other way around. It’s much better to give to understand that her brother is still the same man, regardless of the fact that he is on the verge of building his own family.

Don’t wait that the sister-in-law would change her attitude at once. You should treat her feelings with a lot of the understanding. The conversation with the husband the brother will help. You can explain him all your fears and anxieties. Ask him to talk with his sibling. Perhaps, this one would be difficult. But it’s important for her to see that the tension would entail the estrangement. But the mutual efforts would turn the situation to the better side.

Regardless of what day World Sister in Law Day in 2022 falls on, don’t neglect the course of the relationships between you and the sibling of your husband.

The responsibility for the conflict between the sister-in-law and the wife is, of course, on the both sides. However, we admit it that the sibling has the more comfortable position as she is supported by the whole family of your lover. Plus, she knows her brother better and thus can easily press the necessary buttons to turn his weak sides to her profit. Nevertheless, on your side, there is the good intention to keep peace in the family which means that the moral side of yours is a way stronger.

Obviously, there are a lot of the tactical moves to neutralize the damaging effects of the sister-in-law’s influence on your fragile inner peace. The very first of them is the rare meetings between you two, especially on her territory. Everything is easier at home, isn’t it? At the same time, by inviting her to your own house, mobilize all opportunities to show that inside everything is fixed and runs its own way, not similar to the one she got used to.

Another rule is that everything that could be said – must be said. The more you talk the easier your relationships become. The main thing is to hold the conversation naturally and without the unnecessary emotions. Don’t turn the sorting out your relations to the pure hysteria. Even if you are not comfortable with talking out loud about something, think of this powerless irritation flourishing inside – do you really need this?

Even if it sickens you – to listen to the opinion of the sister-in-law – at least, pretend that you do care and take her advice into consideration. It is that simple – to show the disdainful treat for the husband’s sibling. You can just sniff scornfully and roll your eyes, and she would see that her opinion is not welcome here. But what would you get from that? Sooner or later, you’ll face the same thing and after that sort of behavior, you’ll lose the right to cry out for help when you really need this. The life is a long thing and so incredible. It can happen that she would be the one who becomes your one and only lifesaver in any minute.

The respect should be in the first place. By the way you treat your sister-in-law or other relatives of your husband, you show him how he can treat your near and dear ones (including you). On top of that, the same lessons are learned by your children as they are too receptive and sensitive to the peculiarities of the family relationships. Think why the sibling of your man is jealous and criticizes your way of keeping the house. Maybe she just transmits the complaints of the mother which the mother-in-law can’t or don’t want to tell you personally. Or, maybe you really don’t look well after your husband? 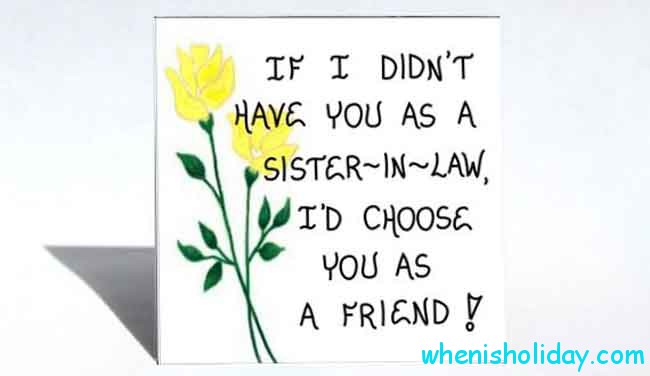 What is the date of National Sister in Law Day in 2022? Let’s take the date of the video uploading as the starting point and say that it takes place on February 15!

Make friends with your sister-in-law, introduce her to your friends/colleagues/relatives. What is better – try to help her find the boyfriend. Then, she would be able to let the steam out by redirecting the energy on the other side. And everyone will be okay, won’t they? Smile at the much-loved sibling of your husband, invite her to visit the important meeting together, pay her the maximum of your attention. Then there would be the huge chance of her smiling back at you!

And the last point that you are ought to always remember – don’t complain about her to your man. The wife can be replaced easily, while the sister – never.

Believe us, there is no better way of celebrating the holiday than spending the evening together with your sister-in-law with a glass of the strong bourbon in your hands and the YouTube show on the screen! Search for “How to beat your sister in law (at everything)” and enjoy!

Mark in the calendar, when is Sister in Law Day in 2022, and don’t ever think of offending that person as she really has the influence on your marriage. Instead, make friends with that woman and life gets so easy!

When is National Pig In A Blanket Day 2020

🍝 When is National Shrimp Scampi Day 2020