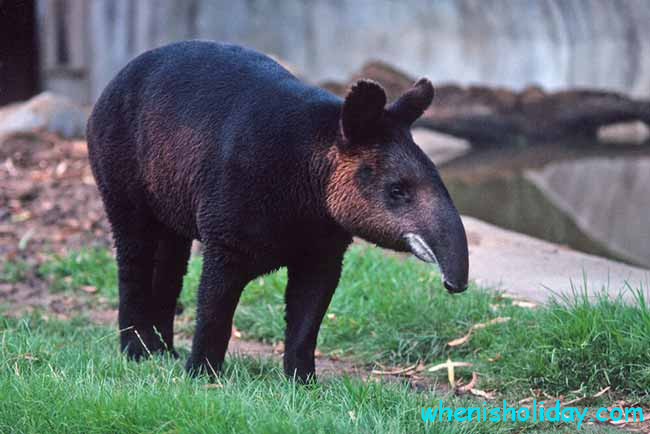 When is World Tapir Day in 2020? Are you surprised to hear the question like? No matter you are! Actually, we were not even surprised we were astonished, when we initially found out about this occasion existence in the contemporary calendar. However, in accordance with our personal point of view, these animal are so cute and funny that they really our attention this day.

Talking about the matter what day Tapir Day in 2020 is it would be quite suitable to talk about the historical background of the event. Unfortunately, we don’t know much about it. The name of the creator of this special occasion has remained unknown. There is a belief that the holiday is actively celebrated since 2008.

The establishers launched this direction in order to draw the people’s attention to this endangered animal, which should be protected for the next generations.

It can’t but mention that these animals should be saved as they play an essential role in the deforestation reducing. The matter is that being the representatives of the oldest species they distribute the seed along the forests, influence in such a way the increase of the tree amount.

What does Tapir Day mean? Have you ever asked yourself this question? We are sure that under these conditions the definite answer can be represented by the only person: you. Why? – The matter is that we can’t make you to be involved into something, if you don’t want to do it. Your personal attitude to the holiday is your personal choice and we are not able to influence it.

The only thing we would like to mention is that ordinary tapirs are found in very many parts of South America, as well as east of the Andes. The main distribution range of this species currently extends from the territory of Venezuela and Colombia to southern Brazil, northern Argentina and Paraguay. The natural habitat of these animals is mainly forest tropical zones with water bodies located near them.

Representatives of the Mountain Tapir species have the smallest area of distribution and habitat. Such mammals are now found only in the Andes on the territory of Colombia, northern Peru and Ecuador. The animal prefers mountain forests and plateaus up to the snow areas. Therefore it is extremely rare and very reluctant to descend to a height of less than 2000 m above sea level.

The habitat of the Central American type of tapirs is the area extending from the southern part of Mexico through the territory of Central America, up to the coastal zones in the western regions of Ecuador and Colombia. The natural habitats of Central American tapir are forest zones of predominantly tropical type. As a rule, such herbivorous mammals prefer areas near large bodies of water.

Discovering the matter “When is International Tapir Day 2020?” and discussing it with various people we came to the conclusion that not contemporary people know how this animal looks like. All in all, Tapirs are representatives of herbivores belonging to the group of equiphers and the class Mammals. Despite some apparent resemblance to pigs, tapirs have a relatively short trunk, which is adapted very well for grasping.

The animal sizes can be quite different and they usually depend on the species. Most often, the average length of an adult creature does not exceed a couple of meters, and the tail is about 7-13 cm long. The height of the animal at the withers is about a meter, and weighs between 110 and 300 kg. The forelimbs are four-toed, and on the hind legs of the mammal there are three fingers.

The upper lip of the tapir and the elongated nose form a small, but incredibly mobile proboscis, which ends in a characteristic patch, surrounded by sensitive short hairs called vibrissae.

Because of the small hooves, the animal is able to move quite actively along the soft and viscous surfaces. The eyes are rather small in size, and they are located on the sides of the head.

When is Tapir Day in 2020, calendar will surely remind you. It will happen as usually on April 27th. Are you going to be involved? If your reply is positive, mind the date carefully, please, as the special occasion is not an official one. It is celebrated only in some circles, usually professionally ones, so you can easily forget about its existence.

As you perhaps understand you should organize the celebration only on your own, as it would be really silly to wait for any events from the local authorities. What about going to the local zoo then? Do you have one in your native town? Visit it and discover something really new about these funny creatures. If it is impossible for any reason, just spend this day investigating something about these animals. You see, under these conditions your choices are endless.

For example, not everybody knows that the tapirs prefer to lead a solitary lifestyle, and the two individuals encountered often have an aggressive attitude towards each other. Also the amazing thing is that these mammals restrict their territory with urine, and communication with congeners is carried out by producing sounds reminding whistles. Some types of tapirs are not only excellent swimmers, but climbers, and also with great pleasure they dig and swim in the mud.

Despite the massiveness and large size, tapirs are able not only to swim very well, but also to dive deep enough. In general, these unusual representatives of herbivores, belonging to the order Unpaved and class Mammals, are shy and cautious. At the first sign of a threat, tapirs seek shelter or quickly flee, but if necessary, they are fully capable of defending themselves with bites

Well, the answer to the question “What is the date of Tapir Day in 2020?” has been already given and the followers of our internet resource know quite well that it will happen on April 27 annually. All in all, this animal is considered to be rather amazing. However, not everybody knows that there are some kinds of them.

Read more:  The Feast of the Transfer of the Unmade Image of the Lord Jesus Christ (The Third Savior)