When is National Children’s Book Day in 2020? Well, to tell you the truth, we are almost sure that you are going to answer this question negatively. Why? – The matter is that the practice shows that most part of contemporary people has never heard about the existence of this special occasion in modern calendar. We find this situation to be an unfair one that is why today we are going to discover it in as many details as we can.

Discovering the matter what day Children’s Book Day in 2020 is, we would like to demonstrate you some amazing pieces of information. As a rule, the matters concerning the historical background of any holiday are of great demand among our followers.

All in all the date of April 2nd was chosen for celebration not occasionally. Initially it was the day of birth of Hans Christian Andersen, who made a significant contribution into the kid literature development.

In general, the children’s literature as an independent direction is a relatively new phenomenon. Until the middle of the 17th century children, who knew how to do it (the common situation with literacy was rather poor), read the same books as their parents or adults. However, both those and others always had a different source of knowledge: fantastic, historical and everyday stories that existed in the oral tradition. The children listened to them together with adults, and no one cared whether the narrative was suitable for the child. Small people, like the elder ones, took from there everything they could.

Some of the works of ancient oral creativity have been available to us in print. And even nowadays they cause the same interest in children and adults as they did thousands of years ago. The most typical example is the fables of Aesop, which were written for the first time in the 4th century BC. Other well-known samples of oral folk art were the legends of King Arthur and Robin Hood and, of course, folk tales collected by the Brothers Grimm and Sh. Perrot.

The origins of the children’s book dated back to the era when a printing press appeared in England and W. Kaxton published the first book in English in 1477. Among his numerous publications, which certainly attracted children, were Aesop’s fables and the funny animal epic “The Novel about the Fox.”

What does Children’s Book Day mean? – Well, frankly speaking, it is only up to you to decide whether to celebrate this holiday to forget completely about its existence. You see, among the modern people, there are a lot of those, who don’t like reading, preferring watching TV or surfing the net instead. Consequently, it is not a great surprise that their children are not going to choose the leisure activity.

The international day of the children’s book was created to remind contemporary people about the enormous contribution of these editions. It is really impossible to imagine the formation of the child’s personality without this important component. The moral values, intellectual and spiritual development of the new generations as well as the future of our planet in general are impossible without them. The main goal of the special occasion is to draw attention to literature, books and art, recommended especially for kids. This holiday is also used to spread the reading among the youngest ones.

Investigating the question “When is International Children’s Book Day 2020?” we understood that it is necessary to represent our followers some amazing pieces of information.

Heroes of children’s editions can be represented by kids, animals, toys, equipment (locomotives, cars, etc.), fantastic creatures and adults. It should be borne in mind that boys and girls like that the main character was either of the same age as them, or slightly older.

If the typical hero is an adult, let him/her play a role model: boys around the world are fond of supermen, and girls are fabulous princesses.

Sometimes it’s a good idea to take the own child as a personage or to write a book specifically for him/her. By the way, many famous works, for instance, “Alice in Wonderland” and “Winnie the Pooh” were written in this way.

The hero of a good edition should have the following features: 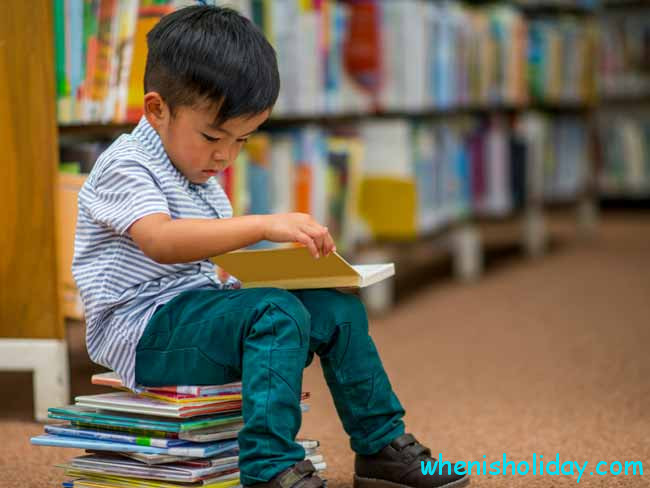 When is Children’s Book Day in 2020, calendar will surely remind you. This special occasion has a fixed date and it is celebrated on April 2nd annually.

Every year, one of the international branches of IBBY receives an honorable right to be an official sponsor of this day. The organization defines the topic, invites the writer from the same country. This person becomes the honorable author and he/she should write the message to the children. Another person, who is chosen, is the famous illustrator. The task of the last person is to develop a official poster for the event. In the future the materials are taken for popularization books and attraction of kids to reading.

Every two years on April 2nd the most popular writers and artists in this sphere are awarded. The winner gets a gold medal, created in the honor of Hans Christian Andersen. This prize has the second name “Minor Nobel Prize” and it sounds really great. The precious sample, which contains the popular storyteller’s profile, is handed to the some winners, chosen by particular Congress of the International Council. The medal is added with the Honorary Diploma for individual books. The same things are given to those, who are the best in illustration and translation of this literature.

In many countries all around the planet you can visit amazing exhibitions, different contests, various performances, interesting conferences and great festivals. All of them are devoted to the best children’s products. Modern writers and poets are invited. They are always ready to answer the questions of small readers.

Talking about the question “What is the date of Children’s Book Day in 2020?” we would like to explain our readers something really important and amazing at the same time. Usually when we are discussing the literature we mind the content, but we rarely think about the pictures in the samples.

There is no universal recipe for an ideal illustration. But there are three rules that allow artists to create attractive drawings for children’s books. Here it is our list: