The history of our civilization can well be called the history of wars – only in the last century, humanity had to survive two world wars, and local armed conflicts in different places of the planet occur constantly. According to the UN, governmental political agreements are not enough to end military conflicts in the world — sustainable peace must be based on the moral and intellectual solidarity of humanity. It is this idea that is the basis International Day of Peace, which is celebrated every year on September 21 and aims to promote peace initiatives and ease military tensions. September 21 national Ukraine also celebrates Peace Day — recently, this issue is particularly relevant for us.

The world peace movement is constantly going through periods of ups and downs. Activation is usually observed in times of military operations – and this is not surprising, because in a situation of real bloodshed or a high probability of it, people’s greatest desire is to prevent and stop violence.

Pacifism as an ideology of nonviolence and an anti-war movement appeared only at the beginning of the 20th century, but its essence is very old. As far back as 500 BC, Siddhartha Gautama, known as the Buddha, taught that no living being should be harmed, and the philosopher Socrates argued that a good person would never do harm to another person. Not long before our era, the religious community of the Essenes in Palestine preached non-violence, and the warlike Roman Empire had a long period of peace known as the “Pax Romana”.

The spread of Christianity with its principles generally contributed to people’s desire for a peaceful life, so in 975, the “Peace of God” – “Pax Dei” movement arose in France. Its purpose was to protect women, priests, pilgrims, merchants and other civilians through agreements between churchmen and secular authorities.

The organized public movement for peace began in 1815 in the USA, when the Anglo-American war, which was called the Second War of Independence, was going on. The first International Peace Congress was held in London in 1843, and the two conferences held in The Hague in 1899 and 1907 were the most encouraging. By 1914, there were about 160 organizations of peace fighters in the world, but they could not prevent the outbreak of the First World War.

The result of this war was the creation of the League of Nations, whose charter included the preservation of the national sovereignty of states. In 1920, the League of Nations established the Permanent Chamber of International Justice in The Hague, and in 1928-1929, 60 countries signed the Brian-Kellogg Pact, which was essentially a treaty to renounce military action as a means of resolving political disputes.

The terrible events of the Second World War pushed the world to another search for peaceful understanding, which is why 50 states founded a new international peacekeeping organization – the United Nations. From the moment of its creation, governments are obliged not to use force against other countries, except for self-defense and powers granted by the UN Security Council.

However, the post-war world split into two camps – communist and capitalist, after which the so-called “cold war” began. Sometimes it had every chance to go into a hot phase — for example, during the Caribbean crisis in 1962. In order to obtain at least some guarantees of peace, many memoranda and treaties were signed in the following years, including a partial ban on nuclear tests in the atmosphere, ocean and space, and a direct line of communication between the leaders of the USSR and the USA was established.

At that time, the hippie subculture with the philosophy of peaceful coexistence and love for one’s neighbor became widespread in the USA, Canada, and Great Britain. As active opponents of the US war in Vietnam, hippies often held anti-war rallies and marches. They were joined by famous people – for example, John Lennon in 1969 staged a protest “For Peace in Bed”, staying in his bedroom for eight days.

In total, the Cold War lasted 45 years, and although there were no direct military confrontations between the two main antagonists, each of the two countries spent astronomical sums on the arms race, and millions of people died due to the struggle for influence over the Third World countries. This confrontation finally ended in the late 1980s, and since then the peace movement has become concerned not only with anti-war and anti-nuclear themes, but also with racism, poverty, sexism and environmental degradation.

Establishment of the International Day of Peace

It is interesting that the establishment of the International Day of Peace was not connected with any specific war. The idea of ​​this holiday belonged to two countries – Great Britain and Costa Rica, which has a special history – since 1948 it has not had its own regular army. So, on the initiative of these states, the UN General Assembly in 1981 declared the opening day of its session, that is, the third Tuesday of September, the International Day of Peace.

The holiday was celebrated for the first time in September 1982, and in 2001, the UN General Assembly was supposed to begin on September 11, the day of the infamous terrorist attacks in the USA. Kofi Annan, the organization’s secretary-general at the time, made a statement that forever changed the nature of the International Day of Peace — it was declared a day of global cessation of fire and violence. The UN has called on all conflicting parties on the planet for a 24-hour truce to give hope to people forced to live under gunfire and to demonstrate that achieving peace is possible.

In February of the following year, in support of the decision of the UN General Assembly, the Ukrainian president signed a decree establishing Peace Day in our country. According to him, this holiday should be celebrated on September 21 every year, on the International Day of Peace.

Under what theme will the celebration of the International Day of Peace take place in 2021?

The theme of the event in 2021 is “Better recovery for a just and sustainable peace” and is related to the consequences that the world received after the pandemic and the problems of equal access of the population of different countries to medical and social care, in particular to vaccination.

What logo does the International Day of Peace have?

The logo of this event features a white dove with an olive branch, as this particular bird is considered a symbol of hope and love in Christianity, Islam and Judaism. The “Peace Dove” from the painting by Pablo Picasso first became the emblem of the World Congress of Peace Supporters, which was held in Paris in 1949. Picasso later transformed the image into a simple graphic design that became one of the most popular symbols of peace.

Which countries in the world are considered the most peaceful?

According to the rating of the “Vision of Humanity” organization, which measures the “peacefulness” of states according to 23 indicators, Iceland takes the first place. New Zealand, Denmark, Portugal, Slovenia, Austria, Switzerland, Ireland, Czech Republic and Canada are in the top ten. Ukraine occupies the 143rd place in the list of 163 countries.

Which era in the history of human civilization is the most peaceful in terms of peace?

Evolutionary historians claim that we have the most peaceful era right now. Despite the fact that there are constant local wars in the world, the amount of violence since the beginning of mankind has significantly decreased and modern people have much less chance of dying as a result of violent actions or war than, for example, in the times of the Middle Ages.

On this day, the Peace Bell rings every year at the UN headquarters in New York – it was presented by the Japanese government in 1952, and this bell was cast from coins collected by children from all continents. People in different countries take part in events dedicated to the topic of peace. These events range from private gatherings to large-scale forums and concerts for the general public.

There are also interfaith understanding ceremonies with joint prayers for peace, car races, tree planting campaigns, art exhibitions and a peace march. Young people often organize flash mobs, and members of environmental associations make models of “doves of peace” from recycled materials, drawing attention to the state of the environment.

An integral tradition of the International Day of Peace is a minute of silence, which occurs exactly at noon local time in all time zones. This simple but highly symbolic act, often accompanied by the lighting of candles, demonstrates the unity of personal and planetary peace, the connection between generations and the memory of human loss in all wars.

In our country, the traditions of Peace Day are similar to those of the rest of the world. Peace marches take place in cities, solemn rallies are held near monuments to fallen Ukrainian soldiers, historical museums and libraries are preparing thematic exhibitions. It is very important to teach children to live in peace, so special lessons are held in schools on this day, and at home children should be told about the concept of peaceful dialogue, that is, about ways to resolve any disputes without physical or moral violence.

This event reminds people from all corners of the planet that they actually have more in common than what can divide them, because almost all of us still have to fight poverty and disease, overcome problems in the economy, education and medicine. Also, on the International Day of Peace, we can get more information about the safety of life in different countries, for example, from the annual “Global Peace Index”.

There is an opinion that there is no better way to fight for peace than to build up military power. However, in today’s world, more than 1.5 billion people live in countries with armed conflicts, and the gap in economic and social development between such states and those living in peace is widening. And although an armed army can be a solution in countering the terrorist threat, it does not solve the deep political or social problems, and sometimes even complicates their overcoming. Therefore, international peacekeeping organizations place their greatest hopes on mediation and diplomatic dialogue.

The most relevant for Ukrainians today is the undeclared war that has recently been going on in eastern Ukraine. The painful loss of life and economic losses demonstrate the extreme relevance of Peace Day, because nothing makes people more deeply aware of the benefits of a peaceful life than the personal experience of war in their own country. 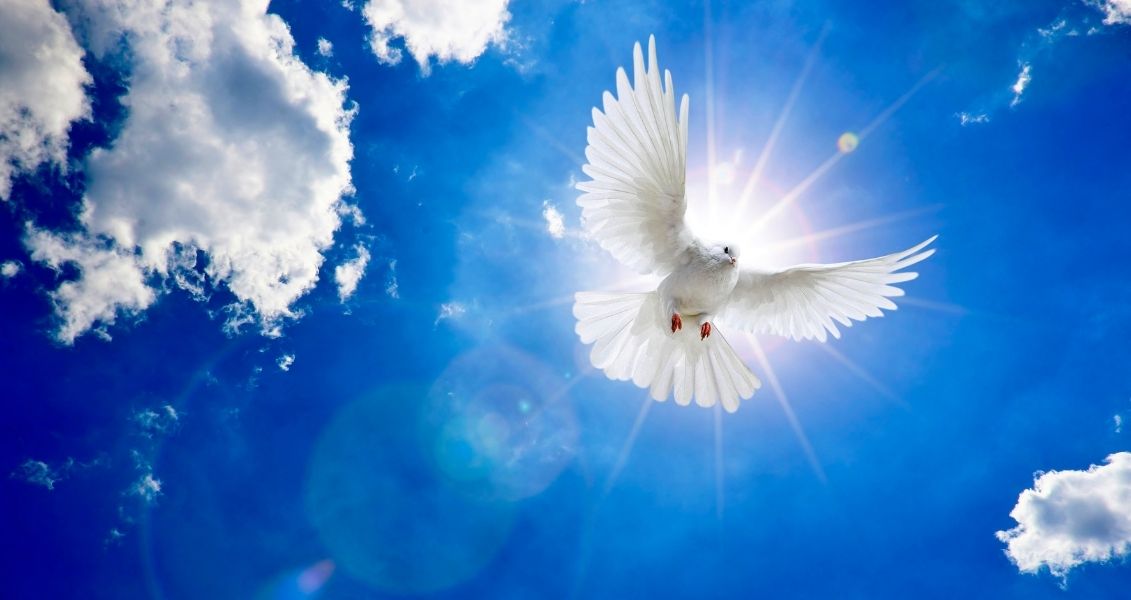 Laying on the Belt of the Holy Mother of God

The day of memory of Saint Jacob the Syrian