WhenIsHoliday.com
Home World 🤝 When is International Day of Charity 2022 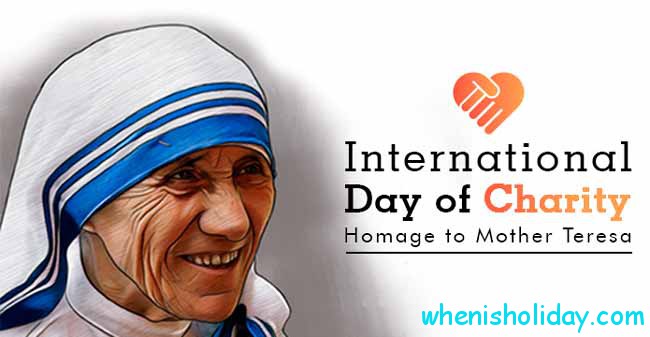 People of the whole world try to improve their own lives and to help indigent persons to survive and be healthy. Individuals try to gather in charitable groups and pay attention to the people in need. Thousands of men and women annually get a great help from various charities. Thus, it was decided to set a day to appreciate that great help. The United Nations made a special occasion. Nowadays there are different ways to encourage the community to donate some amounts of money to people in need. One of the ways is to be involved into this proposed event. When is International Day of Charity in 2022?

The history of the occasion has got certain information because the event was set in 2011 on September, 5th. A proposition to initiate the holiday was given by the Parliament of Hungary. The reason of such proposition was making special festivals or other events to increase responsibility and concern.

Its date wasn’t taken occasionally. September 5th was the day when Mother Teresa died. It happened in 1997. That woman dedicated her life to charitable deeds. In 1979 she got a Noble Prize for her continuous struggle to improve the people’s health and stableness. She tried to help every person who was seriously ill or needed to be educated.

Forty-four members of the United Nations organization realized the need of the charitable day and on the 17th of December they voted to set the International Day of Charity. The event was initiated to raise the awareness of people in the whole world.

The first commemoration took place in 2013. The heads of various world organizations held several keynote speeches. They explained the role of the set occasion. The leading international charitable groups were represented to the society. Lots of lessons of charity were given in the whole world. In Albania and Hungary various photo exhibitions and donations were proposed to the public. In Budapest there was a great free vegetarian food program for homeless people. The next year a great majority of restaurants all over the world proposed meals to people in need. The answer on the question “What day National Day of Charity in 2022?” is “On September, 5”.

What does National Day of Charity mean for the society?  The occasion carries a great sense in itself. It is no matter whether it’s a great company as “The Coca-cola Company” or a small group; it can participate in the event all the year round. Their charitable role in everyday life of the society is very valuable. Every company can make a serious impact on the community.

Every organization and personality has its own reason to donate money to indigent people or health organizations. One of the reasons is to reduce taxes. It is a double benefit. People in need get some amount of money and the organization gives the help and doesn’t pay much money as the taxes.

There is a chance for communities in need to improve their way of life and to get products which they can’t get in their ordinary life. Personalities, who give donations, understand the value of their own lives. The standard of their being always increases.

Good deeds always make charity providers satisfied. There is no matter what organization to choose for donations. It may be devoted to a struggle against cancer or heart problems. Many individuals provide foods and clothes to poor families. The result is the same. Donators always get satisfaction and appreciations through the act of donation.

The amount of money given to the needs of charity has risen greatly. Everyday more and more personalities and companies throughout the whole world join this great goal. Nobody can deny the role of philanthropy in the social life. The event is a chance to join the occasion and to involve other people and organizations in this great deed. When is International Day of Charity 2022? It’s on the 5th of September.

The title of the occasion doesn’t seem to be strange. Every person who hears about the event understands that it is necessary to prepare a donation for the poor or ill people or even animals or nature. The word “charity” has its origin in the Old French variant. But the first appearance of the similar form was in Latin. It meant “high price”, “dearness” then. Later the word joined to the Greek word which meant “love for others”.

Thus, the new concept of the word “charity” was taken into use. It is an act of philanthropy. It is an act of love and good will toward another object. It can be a human, an animal, nature. It is also an aid which is given to people in need.

Another meaning concerns the whole organization. It’s a company which deeds are devoted to the process of gathering various amounts of money from philanthropists. Then the organization sends the money to the needed people or spends it on various benevolent needs.

As a variant, “charity” is also a gift itself which was made for social needs. It can be an institution which was started for this purpose.

Besides providing the needed all the necessary subjects (healthcare, water, food, clothing), the act of donation and care can be introduced by visiting hospitals, prisons, geriatric homes and other places.

The National Day of Charity is held on the 5th of September each year. Various festivals, concerts and other charity events are provided to involve thousands of people in this great deal. Modern society proposes rather great actions of donation which are planned almost in every city and village of the world. Local authorities usually make charity fairs. The money which is got during the event is sent to the needed persons and organizations.

The level of awareness is increased by spending time with poor people, ill children and the old people. The ways of representing the acts of charity are various. There are many possibilities to be involved in the donation. Groups of people can organize free food to the homeless, give them clothes and the means of the first aid. Other ways can concern being involved in the process of gathering the money for initiating some health organizations or building medical centers. If you want to take part in the occasions, you should better ask the local authorities “When is Day of Charity in 2022, calendar of events?”

Different social moves are proposed in the Internet. They provide certain deeds under a generous purpose. They gather money, make festivals or competitions. After that the organizers give the money to a certain person or a group.

The role of donations can’t be overvalued, so there are several facts about the event that everybody should know:

What is the date of National Day of Charity 2022? It’s on the 5th of September.

International Day of Taiji and Qigong

World Day of Science for Peace and Development