Food is the basis of life for all living organisms. Although people began to treat their diet from a scientific point of view relatively recently, we all know that food directly affects the functioning of our organs and systems, and this effect is not always positive. However, knowledge does not yet mean putting it into practice, and it is sometimes difficult to give up harmful but tasty products or too high-calorie dishes. In order for people to learn as much as possible about the benefits of healthy eating, change their eating habits for the better and strengthen their health, there is a special holiday — Day of healthy eatingwhich is celebrated annually on June 2.

How did the idea of ​​celebrating the Day of Healthy Eating come about?

We tend to think of healthy eating as a modern achievement, but in fact, people have been aware of the connection between food and health for a long time. The ancient Greeks believed that good health depended on the correct balance between the four fluids in the body and that changes in diet could restore this balance if it was suddenly disturbed. Many ancient philosophers devoted entire treatises to the influence of nutrition on health, and the famous saying of Hippocrates that food should be medicine for a person, and medicine should be food, has not lost its popularity until now.

Certain products have long been used by people to influence health. For example, the Egyptian pharaohs included garlic in the diet of the slaves during the construction of the pyramids, which was supposed to increase strength and endurance, and the ancient Greek athletes – the Olympians, with the same goal, ate almost exclusively meat before competitions.

In the Middle Ages, the attitude to food changed, because gluttony and even enjoyment of food were considered a sin in Christianity, in addition, the practice of strict fasting appeared. In Kievan Rus, they also abstained from certain foods during different seasons – this is evidenced by the advice in the manuscript “Sviatoslav’s Collection” dated 1073. For example, our ancestors were not advised to eat pork in May, and to drink milk in September. Also, the ancient document states that not all foods are useful, and gives recommendations for eating during fasting and on holidays.

In the 15th century, the genius Leonardo da Vinci, among other things, an expert on human anatomy and physiology, compared the process of digestion and metabolism in the body to the burning of a candle. Also, he was probably the first to determine the negative effect of fatty food on the condition of blood vessels.

For many years, the physician of the British Navy, James Lind, observed cases of scurvy that developed in sailors on long voyages. After analyzing their diet, Lind noted that the diet consisted mainly of meat, bread and no fruits and vegetables. In 1747, the doctor decided to add limes to the sailors’ menu, and the scurvy quickly receded. And although many more years had to pass before the discovery of vitamin C, thanks to this experience, doctors’ ideas about nutrition began to change, and interest in experiments in this field increased.

The Age of Enlightenment

During the Age of Enlightenment, science and medicine began to develop rapidly, and in the 1770s, the French chemist Antoine Lavoisier presented his concept of metabolism — the transformation of food and oxygen into heat and water in the body. Thanks to research in the field of physiology, Lavoisier is considered the founder of scientific knowledge about nutrition.

The work of the German scientist Eustace Liebich in the field of the chemical nature of food products – carbohydrates, fats and proteins at the beginning of the 20th century led to the discovery of vitamins. The term “vitamin” was actually coined by the Polish biologist and chemist Kazimir Funk. The word comes from the Latin words “vita” – life and “amine” – nitrogen-containing substance. Funk managed to isolate vitamin B1 from unpolished rice, which turned out to be a cure for beriberi. Later, scientists proved the absence of a relationship between vitamins and amines, but the name “vitamin” stuck. In the following years, other vitamins were discovered by various researchers, in particular, vitamin C was discovered in 1928 and synthesized for the first time in 1933. The last discovery of a vitamin occurred in 1948 — it was vitamin B12.

In the 1950s and 1970s, there was no food shortage or vitamin deficiency in developed countries, but the rise of diet-related diseases forced specialists to investigate the effects of sugar and fat on human health. An excess of these products has been found to be associated with heart disease, diabetes and cancer. At the end of the 1970s in the USA, low-fat diets were recommended to everyone at the state level, but later some sources of fats were rehabilitated – for example, butter was recognized as a useful product when consumed in reasonable quantities.

In the 1970s and 1990s, the practice of enriching food products with micronutrients — vitamins and minerals — began in the world. There have been numerous and very popular diets for weight loss — for example, the Atkinson diet, the blood type diet, etc. However, a highly effective and safe diet that could be used for a long time has not yet been invented. This became another proof in favor of a healthy diet – balanced and without extremes. In further scientific research, scientists have proven the important role of biologically active substances in human nutrition — polyunsaturated fatty acids, phytosterols, carotenoids, terpenoids, polysaccharides, dietary fibers, and others.

In the modern world, the study of the theory and practice of nutrition is dealt with by the science of nutritionology, which arose on the basis of the complex knowledge of mankind in chemistry, biology, physiology and hygiene. Nutrition is the study of everything related to food and nutrition. The science of dietetics is an important addition to nutritionology — in its competence of creating specific diets from correct and healthy food.

Frequent Questions and answers on the Day of Healthy Eating

What is a food pyramid?

This is a graph in the form of a pyramid, in the widest part of which there are vegetables, fruits, cereals, vegetable oils, in the middle – animal and vegetable protein products. A little higher are dairy products, and at the top of the pyramid is food with a content of “fast” carbohydrates, such as sweets, pastries made from white flour, carbonated drinks. The higher the food is in the pyramid, the less of it should be in a healthy diet.

What are the benefits of a healthy diet?

A proper and balanced diet can prevent such serious diseases as heart disease, stroke or type II diabetes, and also reduces the risk of some types of cancer. In case of illness, a healthy diet helps to recover faster, and also prevents gaining excess weight and obesity.

What is the importance of the glycemic index of food in a healthy diet?

What is the role of dairy products in a healthy diet?

An important source of calcium, protein and a number of other vitamins and minerals are milk, cheese, kefir and yogurt. Soy milk, enriched with calcium, is also classified as a dairy product, unlike cream and butter — they are classified as fatty products in dietetics.

How much fish should be in a healthy diet?

Nutritionists recommend eating fish at least twice a week. Preference should be given to the so-called “fatty” fish – herring, mackerel, salmon, sardines and trout. Omega-3 fatty acids, which are contained in these types of fish, help to improve the condition of blood vessels, prevent atherosclerosis and heart diseases.

How to celebrate the Day of healthy food?

This day is a reason to start bringing your diet closer to the principles of healthy food. As in any important matter, nutritionists advise to start with small changes — for example, just try to eat more slowly at first, feeling the taste and aroma of the food. This will help you to get full faster, and therefore not to gain extra weight.

You can give up white bread in favor of whole grain, especially since now there is a wide selection of such bread in stores, and some varieties are much tastier than products made from high-grade flour. In addition, it is an excellent source of necessary fiber, B vitamins and useful minerals.

Drinking regime is an extremely important element of a healthy diet. If you drink clean water in the optimal amount, it will help maintain a normal weight, reduce appetite and the number of calories consumed. Calculating your daily rate is simple – just multiply your body weight by 35 ml of water.

You should gradually change the way you cook food — baked or stewed food is much healthier than fried or deep-fried. Of course, it is difficult to give up fried food altogether, but at least it is worth trying to limit it.

In general, in order to develop healthy eating habits, it is recommended to cook more at home than to go to a restaurant, because there will definitely be no harmful or too high-calorie ingredients in food prepared by oneself. In addition, this approach to food will significantly save the family budget. And nutritionists advise to go for products with a list prepared in advance – then the probability of impulsive purchases from the category of something useless will be lower.

The diet of people changes over time under the influence of many social and economic reasons. This is primarily the purchasing power of the population and the prices of products, as well as individual preferences, cultural traditions, even climatic and geographical factors.

Accordingly, it is primarily the responsibility of state governments to promote the creation of conditions for the healthy nutrition of their population. This is extremely important for Ukraine, because it is no secret that some social strata of Ukrainians, for example, pensioners, are unable to provide themselves with a correct and healthy daily menu. The result is a large number of diseases and reduced life expectancy.

Day of healthy eating raises citizens’ awareness of the basic principles and latest developments in the field of nutrition and dietetics, and also forces them to analyze their own nutrition. Often people think that this knowledge is necessary mostly for overweight people, but in fact, in order to be healthy, everyone needs to eat right, and it is especially important to teach healthy habits to children.

When will we celebrate the Day of Healthy Eating?? 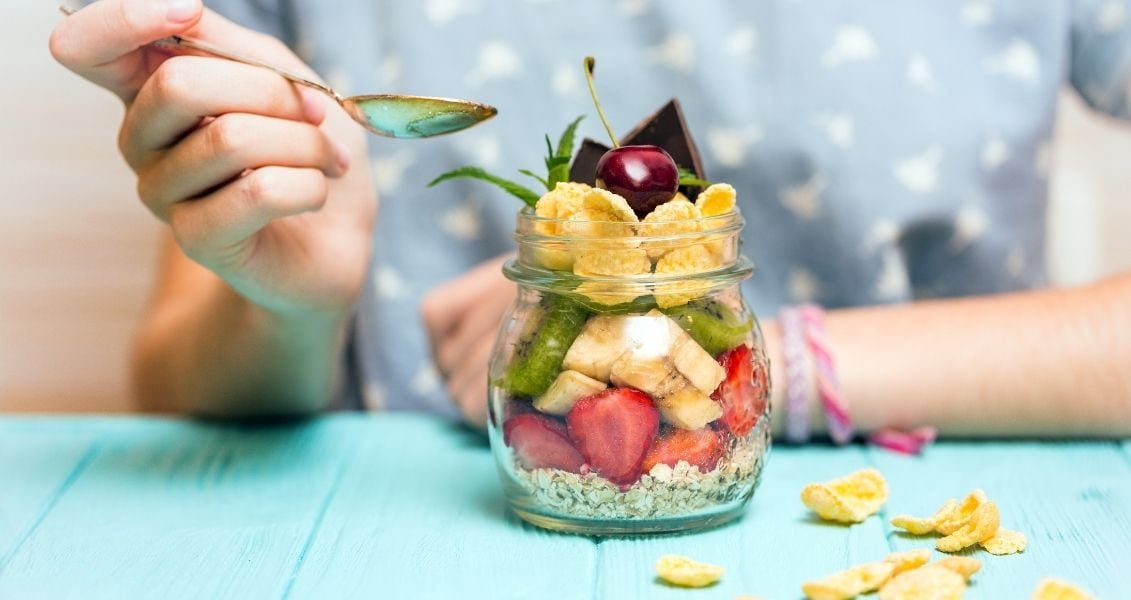