An indispensable product for preparing pilaf, risotto, soups, paella, various snacks, vinegar, wine, desserts and many other dishes and drinks is, of course, rice. And if for Europeans, rice is just one of many edible cereals, then for more than half of the world’s population, including all residents of East and Southeast Asia, it is the main part of their diet – in these regions, rice dishes are eaten two or three times a day day. It is not surprising that the consumption of rice has formed a special culture, and its production is of great importance for the economy of many countries. Of course, people could not ignore this common and at the same time unique product with their attention, so they founded World Rice Daywhich is celebrated every year on September 20.

How did the idea to celebrate World Rice Day come about?

Disputes about the origin of rice among archaeologists and botanists have been going on for a long time, but the most common opinion is that this culture began to be cultivated in the central regions of China, along the banks of the Yangtze River. This version is supported by the unique 7,000-year-old rice grains found in this area. From China, the cereal got to India, Indonesia, Korea and Japan, and later Europeans and residents of North and South America learned about it.

A grain that grows even in water

Rice is a herbaceous plant up to 1.2 meters tall, with a hollow stem and narrow leaves and a twining root system. The panicle, or inflorescence, consists of spikelets in which the grains ripen. Rice varieties vary widely in panicle shape and weight, as well as plant productivity. Rice grains are white and beige in color and reach a length of up to 1 centimeter. Rice is mainly cultivated in tropical and subtropical climates – this plant needs a very large amount of sunlight and moisture, so rice fields are usually located in floodplains of rivers and on coastal plains.

Rice is planted before the start of the rainy season, most often by the seedling method – seedlings a few centimeters in size are more resistant to diseases and weeds than grains. In most of the producing countries, sowing is done by hand, so it is quite hard work – the peasants walk barefoot across the field covered with liquid mud and scatter the seedlings in a certain way. Harvesting is done in the same way as thousands of years ago – with a sickle. The cut stalks are threshed, the grains are dried and sold for further processing. Only in developed countries, in particular, in Japan, the process of growing and harvesting this crop is almost completely mechanized.

The Chinese have many legends about rice. According to one of them, this cereal appeared after a great flood, which destroyed all crops. Just then, a dog came to the settlement, to whose tail was tied an ear of rice. People began to sow grain that could grow even in water, and were saved from starvation.

Another legend says that rice was given to the Chinese by the Yellow Emperor, also known as the “Father of Grain”.

The journey of rice to Europe

People of non-Asian origin did not know anything about rice for a long time. This culture was not grown in Ancient Egypt, there is no mention of it in the Bible. It was only in the IV century BC that the first mention of rice appeared, which belongs to Alexander the Great. By the way, he called India, not China, the homeland of this cereal. In general, there was no place for rice in ancient culture – the Greeks and Romans preferred other grains. Only thanks to the Arab conquerors in the 8th century, rice got to Spain, from there to Italy and France, and thus spread among the peoples of Europe and the rest of the world.

The Italians were the first to try to grow rice in European conditions, although they were not sufficiently familiar with the technology. Unlike Chinese peasants, who released fish into rice fields that ate insect larvae and weed sprouts, medieval Europeans simply flooded plots of land and planted rice. As a result, there were massive mosquitoes, especially malaria mosquitoes, and the crops were very low. Cultivation failed, so rice imported from Asia became a luxury along with Chinese silk and spices.

In the 18th century, maritime trading companies began to deliver rice from European colonies. The popularity of dishes made from this cereal grew – after the colonization of India, the British liked curry with rice, and the tradition of “rystafel” – “rice table”, that is, a whole complex of Indonesian dishes combined with a large portion of rice – came to the Netherlands from Indonesian plantations.

Although rice is used to prepare many snacks, it was fried rice that became the reason for the establishment of World Rice Day. Fried rice is a dish made of boiled rice, which is fried in a pan together with other ingredients – any meat, seafood, eggs and vegetables. Fried rice is the national dish of Indonesia and Malaysia, and is also very popular throughout East and Southeast Asia. The dish has many variations for every taste and one and a half thousand years of history – the first mentions of it date back to the 6th century. Fried rice is believed to have been invented by the Chinese as a way to reuse leftover cooked rice.

So it was this original dish that Benihana, a leading American operator of Japanese-style teppanyaki and sushi restaurants, chose for the “culinary marathon”. On September 20, 2018, two large restaurants of the chain launched a charity event – chefs cooked continuously for 42 hours, and as a result, 576 portions of fried rice were given to low-income people for free in Chicago and 560 portions – in New York. This culinary achievement was listed in the Guinness Book of Records, and September 20 has since been celebrated as World Rice Day.

What varieties of rice are the most popular?

Among the 40,000 species, the most famous are: “arborio” rice – starchy and suitable for risotto; “Basmati” is a long-grained and aromatic variety, ideal for pilaf; “jasmin” – with a nutty taste, pronounced aroma, suitable for most dishes; “Valencia” is round, looks like small pearls, soaks up sauces well and is suitable for paella.

Is rice grown in Ukraine?

So, they started to cultivate rice on Ukrainian land back in the 30s of the last century. Until 2014, domestic production, including rice agrosystems in Crimea, provided 70% of Ukrainians’ needs for this product. Currently, rice grown in Kherson region, Odesa region and Mykolaiv region is only 33% of the required amount, and Ukraine imports the rest from Asian countries.

What is wild rice, popular in healthy eating?

Wild rice, despite its name, is not rice – it is the grain of another swamp plant, a distant relative of rice that grows in China and North America. Wild rice is not subjected to mechanical processing and therefore it retains more vitamins and fiber.

Which countries are the world’s largest producers of rice?

Rice is grown in more than 100 countries of the world, and the largest exporters of rice grain are China, India, Indonesia, Bangladesh, Vietnam and Thailand.

What is the difference between white and brown rice?

These types of rice can be made from the same variety, but they differ in the degree of processing – if in brown rice only the outer shell of the grain is removed, then for the production of white rice, the cleaning process continues, all the shells and the germ of the grains are removed, and they are also polished in a certain way. Accordingly, brown rice has a richer composition and is slightly higher in calories than white rice.

How to celebrate World Rice Day?

Ukrainians, like most people in the world, love rice, so this is a real opportunity to gather the whole family for lunch or dinner, while the main decoration of the table must be one or more rice dishes. To be inspired by culinary ideas, interesting recipes can easily be found on the Internet.

If you wish, you can even try to implement the concept of a “rice table”, because rice is perfectly combined with various products, and therefore you can prepare the entire menu with it – from appetizers to desserts. If you don’t have time for cooking, no problem – we have a good reason to visit a good restaurant, preferably with oriental or Asian cuisine. There is always an opportunity to order original rice dishes and at the same time surprise and delight your taste buds.

On World Rice Day, it is appropriate to share information about this holiday with friends and acquaintances, as well as on social networks. A themed party in honor of rice promises to be fun and tasty – for example, you can prepare a large pan with fried rice with the whole company or invite each guest to bring their favorite dish, and then enjoy the various tastes of this universal product.

This holiday is a pleasant event for many people who love rice dishes. Rice is very easy to prepare, it is relatively inexpensive, and it has high nutritional qualities. The list of cooking methods is also considerable – rice is boiled, steamed, baked, fried, and as a result, different taste sensations are obtained.

In addition, rice is easily digestible, is an excellent source of energy, because 77% consists of carbohydrates. Rice is also rich in B vitamins, vitamin E and potassium, and brown rice and basmati rice have a low glycemic index and do not contribute to weight gain or the development of diabetes. In addition, an allergy to rice is a rather rare phenomenon, so this cereal is an alternative for those who are allergic to the wheat protein gluten.

Some people think of rice as a product with a dull and dull taste, but chefs around the world know very well that it perfectly complements other flavors and aromas – from simple sesame seeds to exquisite ingredients of haute cuisine. And in combination with intensely salty and spicy Asian products, rice acts as a neutralizer, absorbing excess salt and spiciness and thus harmonizing the overall taste of the dish.

The main merit of rice is that it provides enough food for the population of many countries, especially poor ones. For them, without exaggeration, the presence of rice means the very possibility of life, because in Asia, rice accounts for 70% of the daily number of calories consumed by people.

When will we celebrate World Rice Day?? 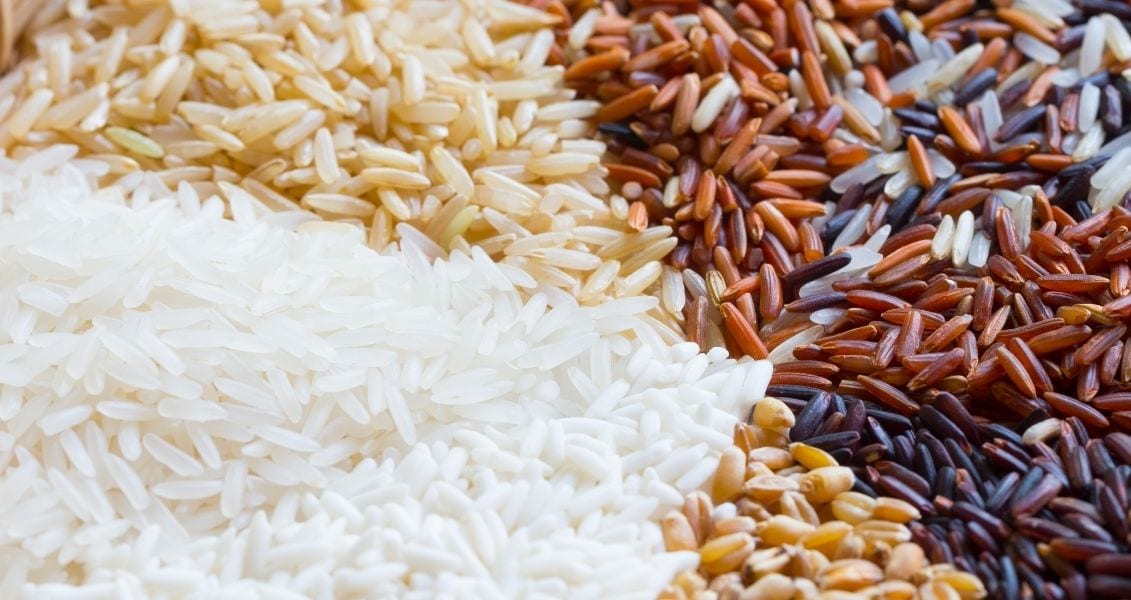 Read more:  Cathedral of the Holy Mother of God