They say that in order to understand any national cuisine, you have to try its soups. There is not a single country in the world that does not have its own version of this eternal dish. Each of them is unique, because it is a reflection of a certain culture that created it. A plate of delicious, fragrant soup embodies simple life values ​​- warmth, peace, home comfort. Usually, soup is a liquid dish made by combining meat and vegetables with broth or other liquid. Most often, the soup is served warm, but there are also cold options. The dish is so popular all over the world that it even exists International Soup Daywhich is celebrated every year on April 5.

How did the idea to celebrate International Soup Day come about?

People learned to cook food by cooking after they mastered frying on fire. The new method of processing made it possible to reduce time, while the products turned out to be more evenly cooked. When and where exactly was the first brewed soup, remains a mystery, but researchers believe that this dish appeared a long time ago — at the very beginning of human culinary history. This is evidenced by 20,000-year-old pottery found by archaeologists in China. This dish has traces of being on the hearth, and although it is impossible to say exactly what was cooked in it, the waterproofness and heat resistance of the artifact gives reason to assume that it was broth made from meat and other products.

For the ancient Greeks and Romans soup was an available dish, why there is literary evidence. For example, in Aristophanes’ play Lysistrata, written in 411 BC, a warrior buys vegetable soup from a street vendor and uses his helmet instead of a plate. Pea and lentil soups were very popular in ancient times. Cabbage, fennel, carrots and onions were also used, and cumin, oregano, mint and mustard were added to the dish as spices. Olive oil, as a widespread product in the Mediterranean, was also a component of soups.

The Spartans used the legendary “black soup”, prepared from pig’s blood, meat and vinegar. Such a protein concentrate was supposed to contribute to the strength and endurance of warriors. It was prepared for the Roman legionnaires onion soup — it was cheap, easy to prepare and had antibacterial properties. It is believed that this dish is the predecessor of the classic French onion soup.

The Chinese say that dinner can be without meat, but it is impossible without soup. The culture of this dish in China has a long history — the first soup recipes that have come down to our time were written more than 2,000 years ago. Chinese soups had poetic names – for example, “golden moon over the sea”, but the ingredients were mostly ordinary. Chicken was most often used as meat, and various vegetables were added. Traditional Chinese medicine has long attached importance to different versions of soups as a treatment for certain diseases.

In the Middle Ages in European countries, soups, that is, soups, which differed in composition depending on people’s financial capabilities, were common food. The more affluent had them on meat or fish broth, and the poor had them simply on vegetable broth with the addition of various cereals. More convenient and deep spoons appeared, suitable for consuming liquid dishes, and in soups began to add pasta. Soups were also used as a light, nutritious and restorative diet for the sick.

By the 15th century, French cuisine alone had about 70 varieties soups. But treating soup as a dish of haute cuisine began only in the 18th century. Progressive cooks believed that soup, like an overture in an opera, should set the tone for the entire feast. During the French Revolution, many chefs who served the aristocrats fled to other countries, taking with them the best culinary traditions. Soup culture began to develop rapidly in Europe and the United States. In those days, cream soups appeared, in particular, the famous vichysoise.

When it comes to Ukrainian soups, borscht is the first to be mentioned, although this dish is so original that it is even strange to perceive it as a type of soup. Long ago, borscht symbolized a strong family, because all the ingredients were cooked together in a clay pot in the oven, exchanging flavors and aromas and as a result becoming a single whole. There are many recipes for borscht, but beets are a mandatory ingredient. For Ukrainians, this dish has become not just food, but also an important part of national culture.

The scientific progress of the 19th and 20th centuries contributed to the fact that soups acquired a new form – a dry concentrate. To do this, the broth was evaporated to maximum thickness, and then dried. The novelty turned out to be very convenient, especially for travelers. The next stage was the appearance of liquid canned soup, immediately ready for consumption. This product gained real recognition, especially in the USA, where in the 60s of the last century, every family had at least eight cans in stock canned soup.

Now there are more than 150 officially recognized types of soups in cooking, each of which has numerous varieties. People’s taste preferences may change over time, but soups – simple or sophisticated, purely national or universal – always remain relevant.

Frequent Questions and answers on the International Day of Soup

At what temperature should hot and cold soups be served?

From 60°С to 70°С — this should be the temperature hot soup. With a hotter dish, the sensitivity of a person’s taste buds decreases. The correct temperature of cold soup is from 6°С to 12°С. There are soups that are served both hot and cold, for example, fish soup or gazpacho.

What liquid is used to make soups, other than water?

Soups are made on kvass, for example, okroshka; on milk and fermented milk products – a refrigerator or a tarator. There are also soups based on a mixture of water and wine, brine, beer, and fruit or vegetable juices.

Why is it believed that soups help recovery?

Soup or broth is easier to eat than solid food, so it is recommended for people after dental operations and for stomach diseases. This dish also relieves cold symptoms, such as a runny nose or sore throat. Most often, chicken broth or soup based on it is used for medicinal purposes.

What national soups are considered the most popular in the world?

There are different ratings, but almost all of them traditionally have the following first places soupssuch as Italian minestrone, Thai tom yum, Ukrainian borscht, Japanese miso, Spanish bisque and gazpacho, French bouillabaisse and onion soup.

How to celebrate International Soup Day?

April 5 is a great reason to have dinner with the whole family with delicious homemade soup on the table, because every hostess has her own “branded” recipe that everyone in the house loves. But, since it is a holiday, it is worth trying to cook soup not according to the usual tradition, but to create something new and original. All the more so, as this is a great dish for taste experiments. And if culinary imagination is lacking, many interesting varieties of soup can be easily found on the World Wide Web.

Unfortunately, it happens that there is no time for cooking at all. Then we offer a variety of canned soups for every taste. You can add your favorite foods to canned soup to make it similar to homemade. If lunch is planned for this day in a restaurant, you should definitely order soup. Prepared by professional chefs, this dish often looks sophisticated and contains unusual ingredients.

It will be useful and fun to share with friends photos of a dish prepared by yourself, a favorite recipe and information about International Soup Day in social networks. It is interesting to implement the idea of ​​a themed party in which soup plays the role of the main dish. For example, each guest can bring their own version of soup in a food container, and then everyone will taste, share their impressions and choose the most delicious recipe.

The answer is simple — because soup is a delicious dish for every day. It is a source of proteins, carbohydrates, vitamins and antioxidants that are easy to satiate and warm in the cold season. In addition to its nutritional value, this dish also has medicinal properties – the broth can be healing for colds and other ailments.

Soup easy to prepare, and also incredibly versatile – you can add your favorite products to it, as well as those that are simply at hand. If you can do with a basic set of ingredients, you can save the family budget. However, this does not mean that the dish will turn out to be uninteresting – you can always add fragrant herbs and spices that will enrich the taste and aroma. Soup helps to save time, because it can be prepared immediately for several days. The dish will not lose its taste and nutritional qualities if it is frozen, and then reheated in the microwave if necessary.

For those who want to lose weight, soup is a real find. As a first course, it perfectly satisfies the feeling of hunger, so the risk of overeating at lunch practically disappears. In addition, you can prepare vegetarian low-calorie soups without meat and fats.

Children often refuse to eat vegetables in their usual form, although they are an important source of vitamins. Pureed soups are a good solution in such a situation, because individual components cannot be distinguished in them. Thanks to this, it is possible to feed little gourmets not only tasty, but also healthy food.

When will we celebrate? International Soup Day? 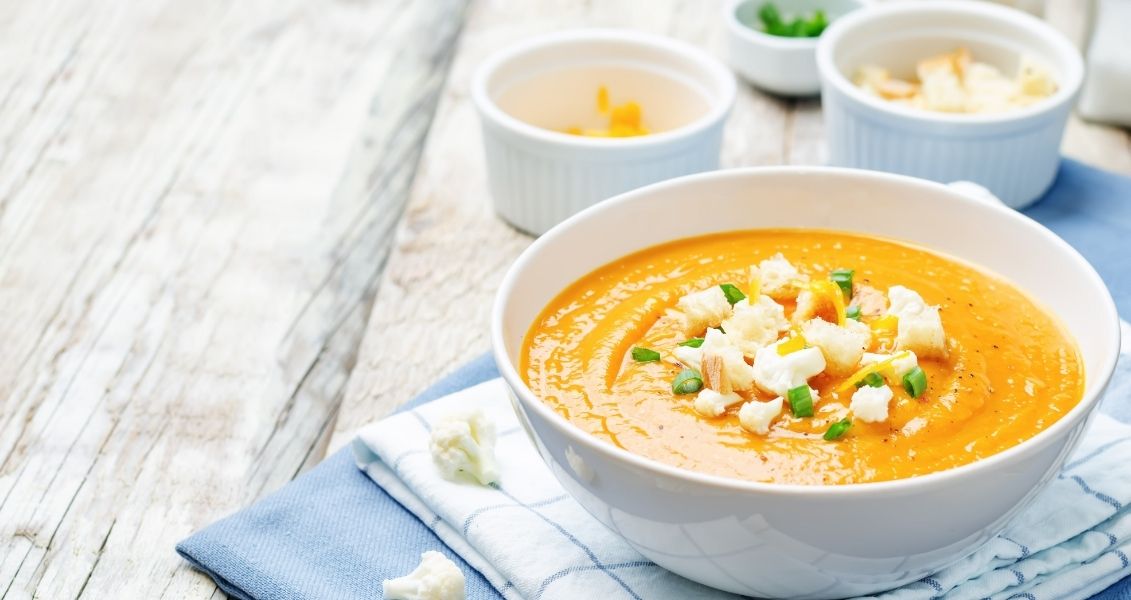