Embrace is a non-verbal form of communication that can replace many words. In this way, we can encourage, soothe, express gratitude, compassion, love, care and many other feelings.

The role of hugs in childhood is special – psychologists claim that they contribute to the harmonious development of the personality and even protect against diseases. Unfortunately, not everyone was often hugged by their parents in childhood, and usually not because of a lack of love, but because of constant busyness and everyday problems. Therefore, to draw people’s attention to the importance of hugging babies, there is a special holiday — World Hug Your Children Daywhich is celebrated every year on the third Monday of July.

How did the idea to celebrate “Hug Your Children” Day come about?

Naturally, hugs have a history as old as humanity itself. Scientists suggest that it was a way for primitive people to share their body heat, and it is likely that the first desire to hug arose from a mother for a newborn child. It is not for nothing that the English version of the verb to hug – “to hug” – comes from the Old Norse “to comfort”. And our ancestors could also express their peaceful intentions through hugs – after all, in order to hug, you need to use both hands, that is, not to hold a weapon in either of them.

Hug family and friends is a natural need for most modern people, but we don’t often think about why this is so. However, physiologists and psychologists have long been trying to find a scientific basis for the importance of this special contact. Based on the fact that we perceive hugs not only emotionally, but also physically, primarily as a touch to our skin, the famous American anthropologist Ashley Montague in his book “Touch. The human meaning of the skin” claims that the skin is our most important organ, because each of its sensations corresponds to one of the fundamental human feelings. Of course, the most important of them is love, and its bodily expression is a hug.

Scientific discoveries in physiology helped to learn more about the mechanisms that trigger hugs in our body. In the 70s of the last century, scientists discovered endorphins – peptide mediators in the human body, which are natural analgesics, and most importantly – responsible for feelings of happiness and euphoria, similar to those caused by the use of morphine. Studies have found that endorphins in the blood increase when people hug.

Direct recommendations as often as possible hug your children parents first received from Virginia Satyr, the world-famous founder of family psychotherapy. An American psychologist even determined the number of such hugs. In her opinion, children should be hugged at least four times a day — this is the minimum they need to survive. For a child to feel normal, it should be hugged eight times, and good growth and development should be ensured by twelve hugs a day.

Virginia Satyr believes that hugs in early childhood contribute to our ability to love other people throughout life. Children who grew up in families where they were not ashamed to show emotions and hug, as a rule, grow up to be kind and tolerant people. In contrast, people who are not hugged during the first seven years of life often have personality disorders such as sociopathy and psychopathy, and may also exhibit aggressive behavior.

Of course, each age of the child has its own characteristics regarding the perception of loving hugs. For example, children up to the age of five need frequent physical contact with their parents, because in this period of life they are very sensitive beings who communicate on an emotional level. Therefore, it is recommended to hug the little one at any time and in any mood – when they are happy, calm or upset.

At the age of five to nine, the self-knowledge of the inner self begins, and therefore the child can perceive any touch as a manifestation of aggression. Therefore, before hugging an irritated or angry baby, you should talk to him and comfort him first with words, and only then use hugs as a calming tool.

Teenagers are generally quite reluctant to let outsiders into their comfort zone, so sincere, welcome hugs are possible only with those whom they consider really close people. Unfortunately, it often happens that parents no longer belong to this category. At the same time, parents should understand that only after satisfying the teenager’s need for emotional contact, they can demand discipline and independence from him. So, first of all, you need to become a close friend for your child, then hugs will be an effective tool in education.

World Hug Your Children Day was founded in the USA in 2008. The idea belonged to Michelle Nichols, who worked as a columnist for Businessweek magazine. Then exactly 10 years have passed since 8-year-old Mark, son of Michelle, died of a malignant brain tumor. The despair of the fact that, devoting a lot of energy and time to work, she did not often enough show her love for her son by hugging him, turned all these years into a difficult period for Michelle.

The woman wanted to save other mothers and fathers from similar bitter experiences, so she decided to establish an event that would promote the idea of ​​the importance of physical contact between parents and children for mutual happiness and strengthening of families. She called it “Hug Your Kids Day.” A non-profit organization and an Internet resource of the same name were also created.

Hug Your Kids Day in History

Frequent Questions and answers about “Hug Your Children” Day

At what age do children begin to take the initiative in hugging?

On average, children start hugging at the age of one year. Of course, this happens on the condition that their loved ones “introduced” them to this form of communication before that.

Do hugs exist in the animal world?

In the human sense, all types of apes know how to hug. Most often, mothers and cubs hug, as well as young animals after experienced stress or conflict.

How long should a hug last?

On average, hugs between parents and children last 3 seconds, but Virginia Satir recommends hugging for at least 20 seconds. It is during such a period of time that the hormone oxytocin manages to be released, which has a positive effect on both the emotional and physical state of a person.

Why do children sometimes refuse hugs?

There can be several reasons for this, for example, an insult to parents or an example of a family member who does not like to hug. There are also diseases in which external touches are unpleasant in principle. In any case, the reason for such behavior should be determined and the child’s personal boundaries should be respected.

Did Virginia Satir, the founder of family psychotherapy, have children of her own?

Ironically, a woman who paid a lot of attention to child development, in particular, the role of physical contact between parents and children, did not have children of her own due to health problems. But she became a foster mother for two girls.

How to celebrate “Hug Your Children” Day?

The very name of this day explains how it should be spent. For most people, cuddling with children is something common and extremely pleasant, but there are those who, for various reasons, do it rarely or not at all. Therefore, on the third Monday of July, all parents should analyze this component of family relations and, if necessary, adjust their habits.

In addition to actual hugs, physical contact with the child is facilitated by massage. It will be especially useful for babies – it will strengthen not only the child’s health, but also the emotional connection between him and his parents. In turn, parents will learn to communicate with the baby through touch, recognizing his signals and responding to them.

Embrace on this day you can not only own children – it also applies to nephews, godchildren, children of relatives and friends. However, one should take into account how ready the child is for such close contact, and never impose this form of communication by force. Children who grow up without parental love in orphanages and boarding schools usually feel a great need for hugs. Therefore, it would be appropriate to visit one of these institutions in order to give the children some attention and love in addition to toys and treats.

Unbelievably, there are cases when, without physical contact, children simply stop growing, despite the fact that they receive the necessary nutrients. In medicine, this condition is called “rejection of growth” and it has been confirmed by scientific research. Scientists believe that one of the reasons for this phenomenon is the lack of the hormone oxytocin, known as the “hormone of love”, in babies. It turned out that this hormone is a growth stimulator in children.

In addition, embrace help babies grow smart, because they need numerous sensory sensations for normal development. Contact with the skin in the form of gentle touches and hugs plays an indispensable role in the formation of a healthy brain. It has been proven that children who grow up in orphanages from an early age and are deprived of loving hugs are more likely to have a delay in mental development.

The physical health of children is also directly related to the number of parental hugs, because the same oxytocin strengthens the immune system by reducing the level of the stress hormone norepinephrine and reducing inflammatory processes.

The benefits of hugs it is also essential for children’s emotional state. Nothing can calm a tantrum faster and more effectively than a parent’s hug. Sometimes it seems that hugging a baby in such a situation is tantamount to encouraging bad behavior, but in fact it is not so – a gentle touch helps the immature nervous system to self-regulate and inhibit excessive excitement.

In addition, hugs are important and useful not only for children. Hugging children, parents also receive many bonuses — their stress level decreases, blood pressure normalizes, and self-esteem increases. But the main advantage of hugs is that thanks to them, children and parents become happier.

Postcards for “Hug Your Children” Day 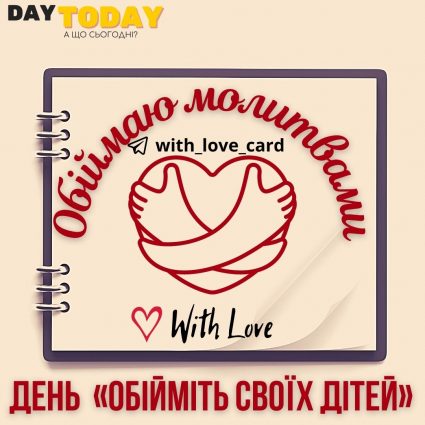 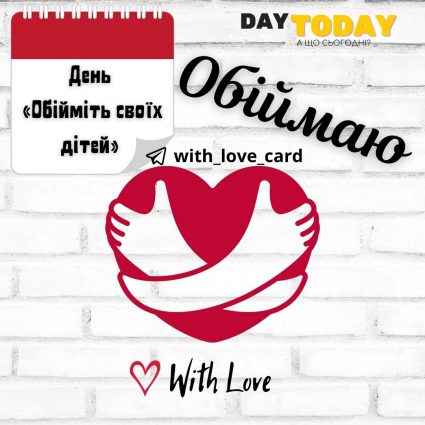 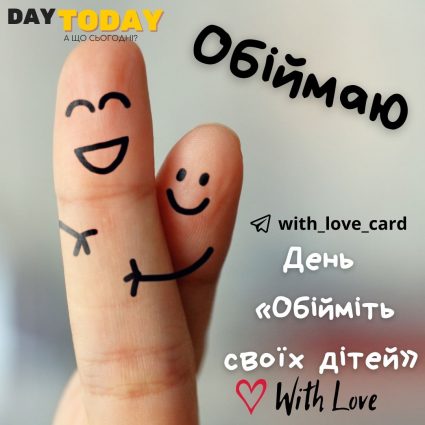 When will we celebrate “Hug Your Children” Day? 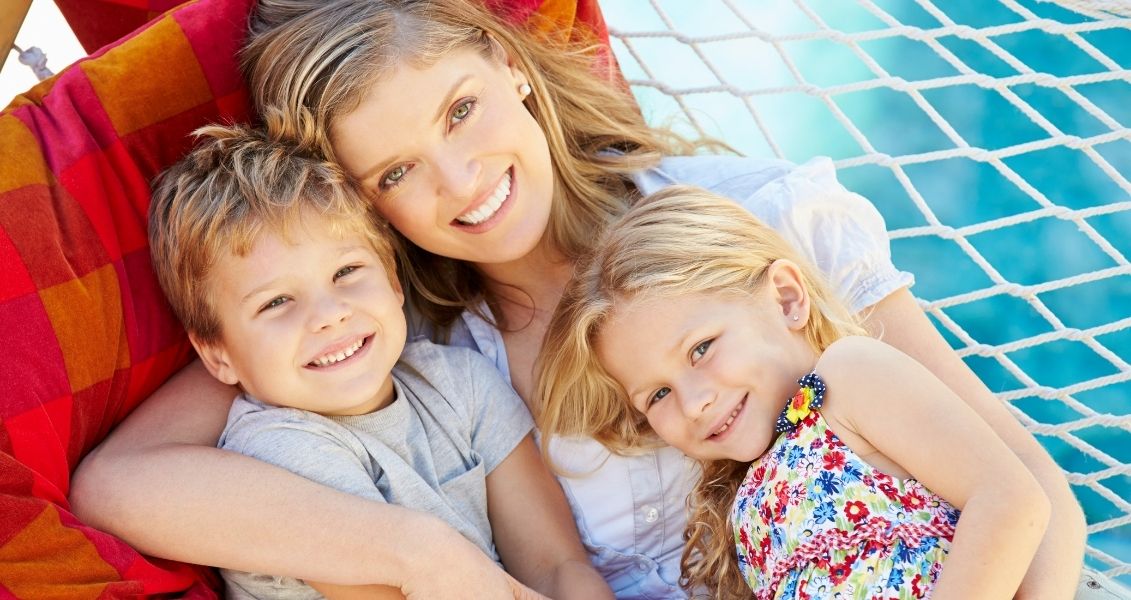 Read more:  Day of the railway worker of Ukraine

The beginning of Peter’s (Petrovsky) fast

Day of the city of Chernivtsi