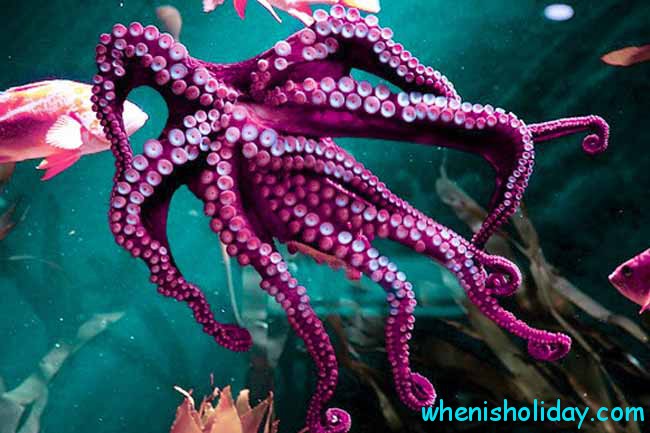 Do you know when is World Octopus Day in 2022? Even if you don’t, it’s not that difficult to guess. The name of the month is quite consonant with the name of the creature while the date coincides with the number of arms (legs?) of it.

Anyway, you’ll find out the answer a bit later. As for now, let’s delve into the story of this marine animal!

The octopus is a unique creature just because it has lived on our planet for more than three hundred million years. Doing some calculations, we see that it precedes the dinosaurs!

Before the scuba was invented, the tool the made it possible to watch the underwater species in their natural conditions, the knowledge about these animals was rather poor. At those times, people thought of them as the cruel, fierce and extremely dangerous animals. Probably, that was because of their scary look, with the snake-like tentacles, fixed look of the huge eyes and the suckers served for sucking the blood out of the victim (that’s what they were sure of back then). The octopuses were oftentimes blamed for the unknown deaths of the people at the seas. The human’s imagination gave rise to many tales about the giant cephalopods able not only to kill the man but also sink the big ship (you remember the Kraken, right?).

The scientists are still lost in conjectures on how many members of the octopus family there are in the world. They are aware of that the creatures inhabit every ocean and the big sea yet they live alone, apart from their mates. That’s why it’s hard to even suppose the approximate numbers.

As we’ve already said, the octopus is a wonderful thing (and you’re going to learn much more about them several lines on). They just had to acquire their own day of appreciation! Perhaps, this was the way the readers of the online forum dedicated to the creatures were thinking when they proclaimed World Eight-Armed Super-Amazing Friend Day in 2007. Although the observance does not get any governmental support, a lot of scientific resources and media annually inform the globe of the upcoming event. No matter, what day National Octopus Day in 2022 falls on, we are ought to appreciate them at their true value. And, believe us, there are tons of that!

What does Octopus Day mean? It means praising these wacky aliens and scotching the myths about them by picking up the real information.

Why aliens, you’re asking? Well, consider this. Each of the creatures is able to change color adapting to the environment. The reason for this feature is the presence of the cells in their skin full of the pigments that contract or widen under the impulses of the central nervous system. Their usual skin color is brown. If they are scared they turn white, if the anger comes in they grow red or even black.

Thanks to the soft boneless body the octopuses can penetrate into the holes and opening that are much smaller than the size of their body. It lets them hide in a great many places – the boxes, cans, tires and even boots. They prefer to settle down in the shelters with the narrow entrance and wide insides. Interestingly, they keep it clean by “sweeping” the room with the flush and putting the leftovers in the special pile outside.

If that’s not enough, read this – they have three hearts and the blue-colored blood! We’ll explain it later. The octopuses are known as the cleverest invertebrate. They are trainable, have a good memory, make out the geometric figures – in particular, the small square from the bigger one; the upright rectangular from the one in the horizontal position. They recognize the people and get used to those who feed them. They even crawl out of their home greeting their owner. If the man spends enough time with the octopus, it becomes tame.

The eye structure of the creature is no different from the human’s one! They see with each eye separately, yet when they want to look closer at something they draw them together and focus on the object, that is, they have the binocular eyesight.

By the way, here’s the first hint on when is International Octopus Day 2022. Which month coincides in sounding with the term? October, of course!

Another word must be said about the way the animals defend themselves. Contrary to the widespread belief, they are not aggressive and dangerous to the people. The octopuses are ones of the chickens! Yet they stand on the defensive bravely. They are able to swim fast. Although in the daily routine they move on the half-bent tentacles or drift slowly, the fear can make them perform the jerks at the speed of 15 kph. On the soft bottoms, they bury themselves in the sand with the pair of curious eyes keeping watch on the surface.

But all these pale in comparison to their advanced way of the self-defense – the ink bomb. The scared animal emits the dark-colored liquid that absolutely disorientates the enemy. Moreover, this liquid does not dissolve at once but keeps the outlines of the animal for a while. Kind of the chemical weapon, indeed. After all, when nothing can save the species, it enters the battle, showing the iron will to live. It even can throw off the tentacle if caught by the foe. What a brave many-limbed thing!

The octopus is the most famous from the cephalopods yet the less examined. It lives an amazingly short life – from one to five years.

The body shape of the animal is rather bewildering. Looking at it, you might be thinking of where are the eyes, mouth, head, legs… In fact, it’s simple. The bag-shaped body is called the mantle and is joined with the head in front with the bulging eyes above. The mouth of the creature is actually a beak. It uses it for grinding the food as it can’t swallow the prey whole. On top of that, there’s a kind of grater in its throat. 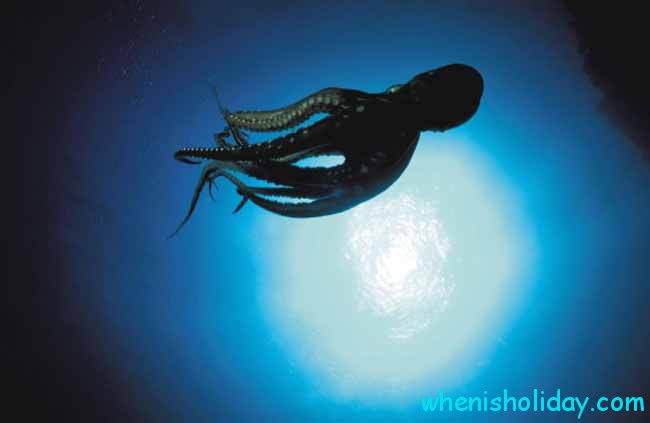 Next to the mouth, there are the eight tentacles. By the way, here’s the answer to the question what is the date of World Octopus Day 2022 – October 8! They are strong and muscular with the lots of suckers of the different sizes. The octopus has three hearts: one is big and two are small. All of them direct the blood flow all over the body. As for blood, it’s blue. That’s because of the respiratory pigment that replaces the hemoglobin. The taste sensors are hidden in the suckers.

The octopuses do not have the hearing organs yet the can catch the infrasound. They are the nocturnal marine animal and sleep with the open eyes turning yellow. All creatures are predators hunting for the crabs, lobsters, mollusks, and fish.

In pursuit of celebrating the holiday, first of all, read an informative resource or a book about the octopuses. You might have lost something if you still don’t consider them the cutest animals that live underwater.

If you’re lucky to have the marine life center in your neck of the woods, just drop by there. Probably, you’ll be able to see the cephalopod in all its beauty and in all its eight arms (or legs).

Mark in the calendar, when is Octopus Day in 2022, and pay tribute to those unique ocean animals.