Day of Heroes of the Heavenly Hundred

Probably, there is not a single compatriot who does not remember the events that took place in Kyiv and throughout the country at the end of 2013 – at the beginning of 2014. For the majority, they became a real break in consciousness, because never before in peaceful Ukraine had popular protests had such a bloody outcome. The first demonstrators were killed by security forces bullets back in January 2014, but the hottest confrontation in the center of Kyiv took place on February 18-20. Then about a hundred protesters died from firearms. The people who gave their lives for the primordial dream of the Ukrainian nation — a just, democratic and developed country — were called the Heavenly Hundred, and February 20 was commemorated in their memory. Day of Heroes of the Heavenly Hundred.

How did the idea to celebrate the Day of Heroes of the Heavenly Hundred come about?

It all started in November 2013, when then-President Viktor Yanukovych, despite his promises, abandoned the Association Agreement with the European Union. This refusal meant a return to pro-Russian politics and outraged most of the progressive Ukrainians.

Youth of Ukraine – for European integration

From the evening of November 21, young people began to come out to Maidan Nezalezhnosti with slogans for the European integration of Ukraine. Later, the protesters were supported by the opposition forces. However, the authorities, led by the president, did not pay any attention to these protests, only brought fighters of the “Berkut” special forces from different regions of Ukraine to Kyiv.

Realizing that the protests would not subside, the authorities resorted to violent dispersal on the night of November 29-30. The reason was the release of the square in order to install a Christmas tree. At the same time, units of “Berkutov” applied unjustifiably cruel methods to the rallyists – they mercilessly beat everyone, catching up even outside the Maidan. Many students managed to find shelter that night only in St. Michael’s Cathedral.

The brutal beating of young people, many of whom were still minors, outraged society. On December 1, Independence Square was occupied by people demanding the resignation of the heads of the security forces and a fair investigation of this event. People from all over the country flocked to the center of Kyiv. There were tents on the Maidan, millions of fellow citizens helped the protests — they donated money, brought food, medicine, and necessary things.

Since President Yanukovych did not pay attention to the public outrage, while none of the security forces was punished for the attack on the students, the mood of the Maidan changed. People realized that nothing will change in the country without the resignation of the government and extraordinary elections. The most famous Ukrainian public and cultural figures joined the citizens’ protests.

All the cities of the country had their own “Maidans”, where Ukrainians joined the demands of the capital rallyists. On the ground, the authorities also resorted to persecution of activists. They were fired, arrested, beaten. In this, the power structures were helped by hired groups of bandits, who were nicknamed “aunties”.

On the night of December 11, there was an attempt by security forces to disperse the demonstrators, but it was unsuccessful. Many residents of Kyiv gathered to help, and taxis brought all those willing to the Maidan free of charge.

In order for Yanukovych’s regime to be able to hold on, on January 16, 2014, in the Ukrainian parliament, deputies voted for “dictatorial laws” that made any manifestation of peaceful protest absolutely impossible and abolished basic human rights and freedoms.

The first human casualties occurred in January. On January 21, Yuriy Verbytskyi, a resident of the Maidan, died after being abducted from the medical facility where he was staying after being wounded. His body with traces of brutal torture was found the next day in a forest near Kyiv. On the morning of January 22, Serhii Nigoyan, who was only 20 years old, was killed by three aimed shots. On the same morning, Mykhailo Zhyznevsky was killed by a shot in the heart.

After these first casualties, there was a relative truce for several weeks, the government was dismissed and the parliament was supposed to return the 2004 Constitution, which gave it more powers.

On February 18, on the day of voting, a column of unarmed protesters marched to the Verkhovna Rada. However, they were met by security forces with gas grenades and “titushki”. Many people were injured, two protesters were killed. In the evening, the security forces announced a demand that women and children leave the Maidan and began an offensive with the participation of a large number of security forces and armored personnel carriers. During the assault, about 20 people died from bullets and grenade fragments.

The bloodiest day in the history of the Revolution of Dignity

Only on the morning of February 19, thanks to the reinforcements that arrived, the protesters managed to repel the attack and hold the Maidan. The next day, February 20, became the bloodiest in the history of the Revolution of Dignity. Security forces quite openly used firearms, and a video with snipers appeared on the Internet. About 70 people were killed.

Late in the evening on February 20, Ukrainian parliamentarians gathered and adopted a resolution condemning violence against their citizens and declaring the actions of law enforcement agencies to be illegal. Everyone in the country understood that the criminal authorities had finally been defeated. On February 21, a farewell to the dead took place in the center of Kyiv, on the night of February 22, the former president left Kyiv, and on February 27, it became known that he was on the territory of Russia. Afraid of responsibility, following Yanukovych’s example, some officials and security forces left the country.

Day of Heroes of the Heavenly Hundred in history

Why were the dead called the “Heavenly Hundred”?

For the first time, the poetess Tetyana Domashenko gave the name to the heroes who gave their lives. During the days of brutal shootings in Kyiv, she wrote these words in her poem “Heavenly Hundred Soldiers of the Maidan”.

How many people died during the Revolution of Dignity?

At that time, 105 people were killed and died of injuries, 47 were missing, the exact number of wounded is unknown.

How many people took part in the Revolution of Dignity?

According to the estimates of the “Democratic Initiatives” foundation, about 5% of the population of Ukraine participated in the Kyiv protests of the end of 2013 and the beginning of 2014. Across the country, 6% of the population joined them in other settlements. In general, every fifth adult citizen, i.e. about ten million people, participated directly or indirectly in these events.

When did Ukrainians start celebrating the Day of Heroes of the Heavenly Hundred?

This day has been celebrated since 2015 in accordance with the decree signed by President Poroshenko on February 11, 2015.

What role did St. Michael’s Cathedral play in the Maidan events?

On December 11, 2013, before the expected storming of the Maidan, the cathedral rang its bells to call the people of Kyiv to help the protesters. In February 2014, a hospital for the wounded was set up in the cathedral, which even had a surgical department. His ministers also gave a part of the cathedral to people for sleeping and rest.

How to celebrate the Day of Heroes of the Heavenly Hundred?

The Metropolitan National Museum of the Revolution of Dignity is preparing various art projects, meetings, presentations of books and films. Usually on this day there is a Walk of Dignity. Memorial services for Ukrainian heroes are held in churches. On the streets of Kyiv, where those bloody events took place, people light lamps in memory of the dead.

Libraries and schools actively participate in the celebration of this event. Courage lessons are held for children with the participation of direct participants of the Revolution of Dignity, thematic exhibitions, patriotic readings, flash mobs, poetry and drawing contests.

For the participants of the Maidan of the end of 2013 – the beginning of 2014, this day is an occasion to gather together, to remember again those terrible and glorious days and to honor the memory of friends who were destined to die then.

On February 20, national TV channels will show special programs and documentaries about the events of the Revolution of Dignity. After watching such films as, for example, “Heroes do not die”, “Maidan” or “5 portraits of the Maidan”, you can see and hear true testimonies from the first mouth, better understand people who did not spare their lives, choosing a better future for Ukrainians

A lot of time has passed since the events in the center of Kyiv at the beginning of 2014. During this period, many people managed to become disillusioned again, forgetting that the development of the state is a long-term process and that the victory of the protesters was only the initial stage of this process. In addition, Ukraine has lost part of its territory, and an undeclared war is still going on in the east.

However, we must not forget that these events were primarily a manifestation of popular anger and desire for freedom. Unfortunately, people’s struggle for a better fate has always been without sacrifices. Always the best of its representatives with pure and ardent hearts who think little of their own safety die for their people.

Heroes of the Heavenly Hundred they gave their lives for nothing, because it was thanks to their self-sacrifice that Ukraine then gained unique opportunities for changes for the better, began to move in the direction of the civilized world – dictatorial laws, which would have deprived us of basic human rights and freedoms, were abolished, the Association Agreement with the European Union was signed . Ukrainians have gained authority in the world as a people with their own dignity and identity. The strengthening of patriotism, solidarity and self-respect in Ukrainian society was perhaps the most important. People realized that they are capable of self-organization and together they can change the country.

Remembering the Heroes of the Heavenly Hundred, despite all the differences regarding the language of communication and ethnic origin, we understand that the highest values ​​remain freedom, dignity and the right to choose one’s own destiny.

When will we celebrate Day of Heroes of the Heavenly Hundred? 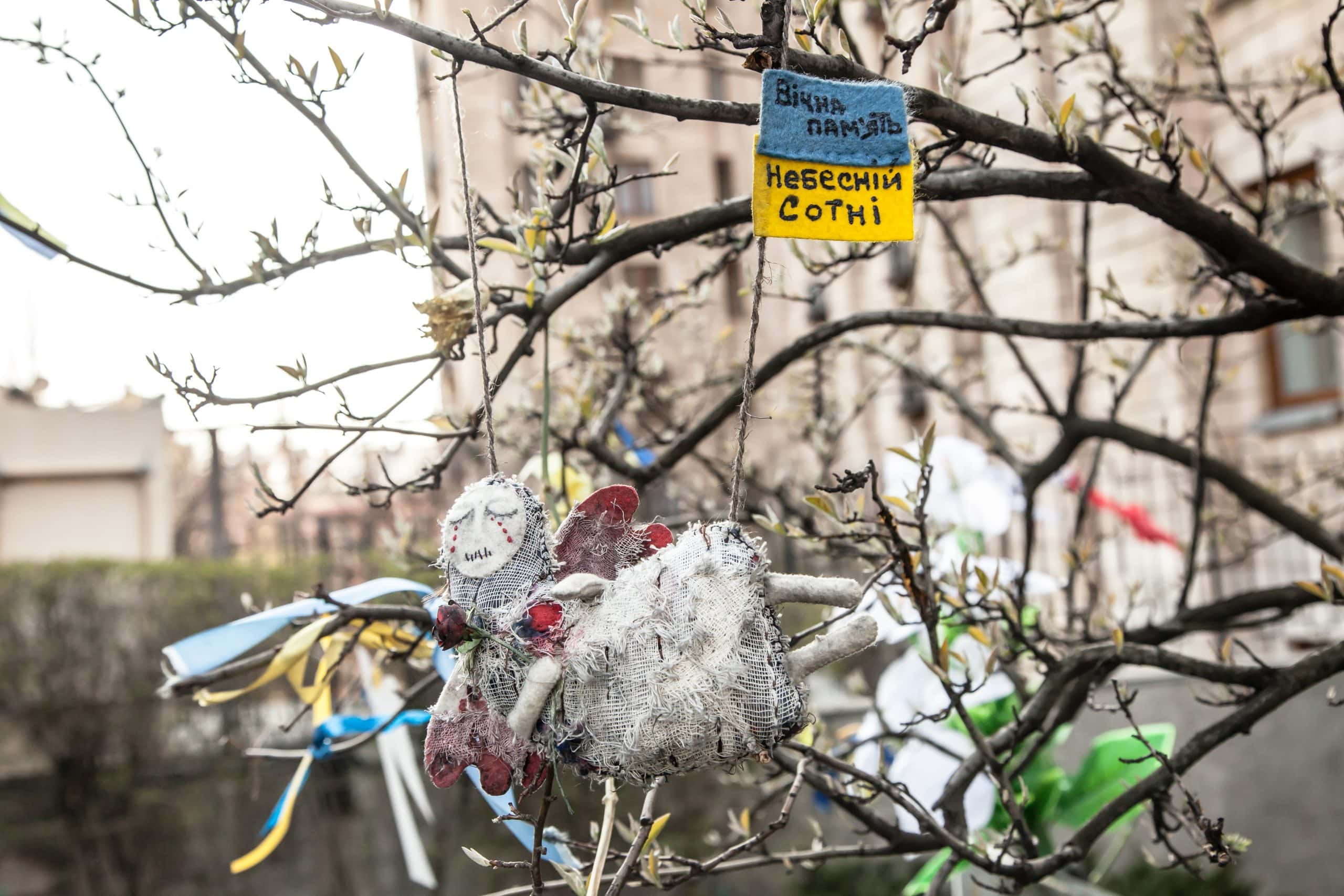 A day of fresh breath

National Forget Me Not Day in 2022