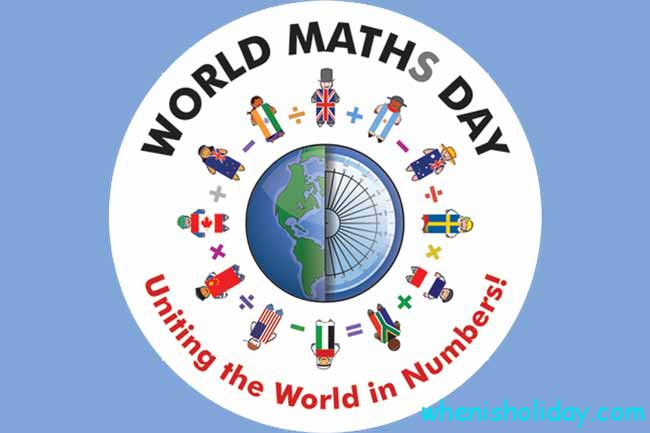 People began to count different objects in far antiquity. Initially they started with fingers and stones, and after that they thought of knitting the knots on ropes. Nowadays it is known well that the ancient Egyptians and Greeks successfully used the special counting frame, represented by a definite plank with strips of stone moving around them. They called this device like abacus. This, at first glance, primitive device was used until the 18th century, and its more modern prototype – until the calculator appearance. That is more or less available information. However, could you, please, answer what day National Maths Day in 2022 is?

Unfortunately, a great amount of contemporary people haven’t even heard about the special occasion like this and that is the main reason why we have decided to discover the situation in details.

Of course, we understand that in our attempts to find out the answer to the question “When is International Maths Day 2022?” we should pay close attention to the historical background of this event in general.

Nowadays this special occasion is celebrated on October 15 annually. Unfortunately, we haven’t been managed to find out why this very date has been chosen for its keeping.

Initially World Maths Day was kept in spring, in March exactly. The first event was organized on 03/13 in 2007 among the representatives of 98 countries. All in all about 300 thousand students had to answer almost 39 million questions.

According to the Guinness Record, in the course of time the amount of participants has been increased steadily, however it was made a decision to reduce the quantity of the set questions.

On March 1, 2010, more than two million pupils and students from 235 countries took part in the special Maths competitions. The official World Day of Mathematics began with the earliest offensive on March 1 (at midnight, Oakland, New Zealand is UTC / GMT +12 hours) and continued until March 1 ended anywhere in the world. The total time of the contest was 48 hours. The competition like that was organized for children and adolescents 4-18 years old and with any level of preparation.

In 2012 the already popular World Education Games were opened for over 5.9 million students arrived from 240 territories around the planet. They hurried to register and to take an active part in the amazing games, devoted to the special occasion. It was the biggest attraction of the year among the representatives of the scientific world.

In 2013, the event was being held from 5 to 7 March. The obtained awards were given to the champions at the building of Sydney Opera House.

What does Maths Day mean? – Believe you or not but for some people is a perfect chance to deep into the secret or even mystical world.

You see, in the last century, the elderly mathematician called de Moivre, who lived in Britain, noticed a strange tendency: every day, when he went to bed, he woke up a quarter of an hour later. As a true scientist, he was curious on what calendar date the duration of his sleep would equal to a day, that is, a full 24 hours. After a simple calculation, the Moivre deduced the number on November 27, 1954. It was on that day that he died. It seems strange or even frightening, doesn’t it?

In the contemporary world children often experience difficulties with mathematics, because they do not see the point in studying it. It means that the answer to the question “When is World Maths Day in 2022?” doesn’t have any sense.

Explain to your kids that every person should master this science, regardless of what profession he/she chooses for himself/herself. Also, the child should be told that mathematics has to be taught in order to be able to recalculate his/her wages. And most importantly the small person should learn that without the knowledge of mathematics it is impossible to make a technical discovery. Perhaps, that might interest your son or daughter much.

When is Maths Day in 2022, calendar will help you to recollect. However, perhaps, you would like to get some additional pieces of information about this event?

For example, one of the most common scientific myths is related to the matter why Alfred Nobel deprived mathematicians of the opportunity to receive a prize of his name. The most typical version sounds like it happened due to the fact that the scientist’s wife was unfaithful to him with the mathematician. It seems quite interesting, doesn’t it? But it isn’t true. – Nobel was never married and generally made the choice between science and women in favor of the first.

A more plausible idea is connected with the fact that at the time of the Nobel Prize, mathematicians had already had their own, awarded by the Swedish king.

There is also the opinion that Nobel did not consider mathematics a full-fledged science, since it consisted entirely of theoretical thinking alone.

Unfortunately, there are no certain rules and customs for this special occasion celebration, but, of course, it is not a problem for people, who are going to keep this day properly. You can always invent something special for yourself, your family, friends or just colleagues from work.

First of all it should be noted that the world day of mathematics is celebrated some times a year, but if you want to join the main one, do it from October 13 to 15. Some contemporary guys and ladies, who want to be mathematically literate, participate in a great variety of educational games, which are kept by various organizations all over the world. As a rule, these games combine Day of Mathematics, Day of Natural Sciences and Literacy Day. 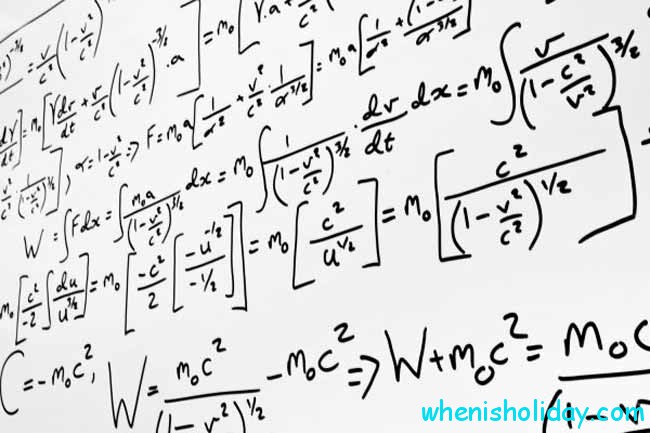 According to the specialists’ point of view, this day can be a perfect moment to interest your child in this science. For example, if the kid likes to help you in the kitchen, ask him/her to count the number of ingredients that are necessary for cooking.

Is the child happy to go shopping with you? Let him/her calculate how much it will take to buy the products. By the way, you can do it not only in October 13.

Try to turn this subject into an exciting game. What about the organizing the real treasure searching? – Draw a map and place on it a point with the letter X. Once the kid completes the solution of one problem, draw a line from one point to another on the map. So it should be continued until the child decides all the mathematical tasks and does not reach the desired point X. After completing all the tasks, the small person gets a treasure in the form of ice cream, watching a cartoon, etc.

Trying to find out the answer to the question “What is the date of World Maths Day 2022?” contemporary guys and ladies usually want to know as much as possible about this matter.

Here is our list of the most amazing pieces of information: