The problem of blindness is so impressive that it should be paid more attention than it happens nowadays. Moreover, a blind person should get as much care as he needs. Nevertheless, the majority of such men and women don’t have any knowledge concerning the amount of disaster in the world and the ways of its solving. That is why it was decided to initiate a real occasion which main idea was to attract the public’s attention to the eye illnesses and to involve governments of many countries into the process of dealing with the problem. When is National Cane Safety Day in 2021?

The problem used to be a serious one for many years. Nevertheless, the solving of it concerned only wealthy personalities. They could buy glasses and medicine. These individuals could get an adequate treatment. That is why the majority of blind people have low income. The statistics says that nine blind persons from ten have low income. It was proved that developing countries have more serious situation and main number of individuals with eye problems live there.

Some illnesses can be treated very easily. But the lack of money, experience and medical care usually lead to serious complications and greater disaster with eyes. The absence of good medical conditions doesn’t let many countries to provide an adequate treatment and concern over blind individuals and those persons who feel problems with their eyes.

It was always difficult for a blind person to travel. They experience great difficulties when they went outdoors. City transport and other services weren’t suitable for a blind person. If they haven’t got any relative and friend who could help them, it was almost impossible to travel or even to a have a walk. That’s why it was decided to accept a special occasion which was to remind the society about the problem and its seriousness.

The date was decided to name National White Cane Day. White canes are the sticks which help blind people to travel independently. The US accepted the law according to which every blind person had a possibility to use the public transport without any difficulties if they had a white cane. It happened 1930. The law promised these people safety in walking at the streets with the canes. They had to use them according to the rules.

In 1963 it was proposed to initiate an occasion on the 15th of October. This decision was proposed by the Federation of Blind. The day was accepted by the local government. It helped more and more blind persons to achieve enough independence for travelling. The information on the request “What White Cane Safety Day in 2021?” is available in the internet.

What does White Cane Safety Day mean for people who have eye illnesses? The day helps the majority of individuals to admit the existence of ill people. Egoism is a common feature for lots of human beings. They don’t usually notice invalids and other ill children and adult. It’s very convenient not to notice them at all. They may exist somewhere but they are not very suitable for men and women without any problem.

Events which are devoted to people with health problems help other individuals to become more concerned to someone else’s illnesses and disasters. The truth is that it can be expressed not only in charity but also in volunteer’s actions. Children can also provide their care to people who can’t see well. They can just help with shopping and simple household chores.

The day provides the majority of humans with the knowledge. They may get information about visual impairment. White canes became a real symbol of life for blind people. They may participate in everyday activities. They get a possibility of integration into the community’s life. A tool for mobility had been used before the 20th century. But the official introduction of the white cane helped everybody to understand the importance of it.

Since those times this stick had experienced slight transformations. Nowadays it is a very special thing which reminds everybody the importance of independence of every person who has defective eyesight.

When is International White Cane Safety Day 2021? It’s on the 15th of October.

The title of the occasion doesn’t usually raise any difficulty in understanding its main idea for native people. But foreigners may not understand the meaning of the occasion though blind people with white canes aren’t rare in everyday life. Definitions may be different according to the country. So, it’s very important to explain foreigners the main idea of the holiday and to show the ways of solving the problems in the concrete country if it’s possible.

According to the dictionaries the word has got several definitions. The first and the main one is a strong stem which is made of natural materials. The stick is usually flexible. Cane is also a tree or bushes itself. Baskets are also made from those stems.

Biologists name a special sort of bamboo which grows in the United States. Stems of roses or blackberries are also called canes. Many years ago people used these things as a means of flogging.

The definition which concerns the occasion means the stick for blind people. It is used to let people feel easy and independent. They move without any help. This stick also helps drivers to differentiate a blind person among other humans. What is the date of White Cane Day 2021? It’s on the 15th of October. 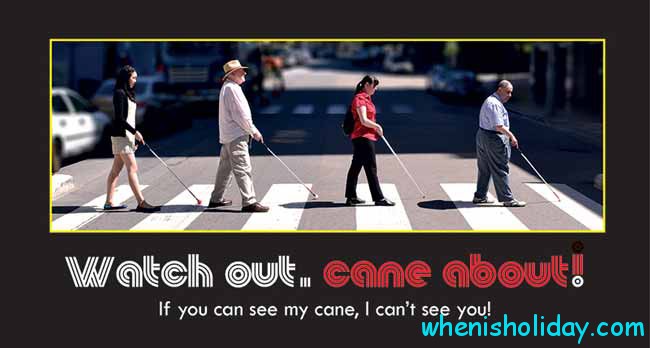 The government of the United States annually proposes the concrete way of celebrating the date. The schedule is strictly observed across the country. Certain activities and ceremonies are proposed for people and establishments. Talking about foreign companies and organizations which want to participate in the event, they should admit their intensions to participate in the proposed festivals and ceremonies. Without such confirmation it won’t be possible to take part in these lectures and festivals.

The society is always engaged into the observance through the acts of donation and volunteering. There are several charity meetings which provide money for medical establishments that deal with eyesight illnesses. Every person can propose his own help and support to a blind neighbor or relative. It is a chance to provide them with a certain care.

Several international and national organizations of blind propose their own schedule of observing the day. The National Federation always promotes the idea and main goal of the event. The society is to become aware of the problem.

Many educational establishments hold various lessons of mercy explaining to children the idea of the event in a whole and the importance of care and concern in relation to people who are in need. “When is White Cane Safety Day in 2021, calendar of events?” This question always helps to be in touch with the schedule of the day.