The problem of freedom has always been interesting to people. They want to be free and independent though various historical processes often made it impossible. Freedom is one of the obligatory human rights. It is mentioned in the main laws of many countries. The Constitution sets the right of every citizen to be free. If the right is trampled, the governments of the countries try to influence the situation. Such a case was when the Berlin Wall existed. Lots of countries and their leaders tried to do their best to influence the situation through international negotiations. Due to them the Berlin Wall fell. This event is nowadays widely celebrated not only in Germany but also in many other countries. When is World Freedom Day in 2022? How is the date observed across the world?

The day is devoted to the event which became a symbol of freedom for many countries. The date is annually observed in the United States of America. The idea of setting the occasion was proclaimed in 2001. It was G. W. Bush’s idea. The man was the President of the USA on that time. He declared that the 9th of November had to become World Freedom Day. The date was said to mark the fall of the Berlin Wall.

It’s wasn’t a simple wall. It was a great fence which didn’t let people from the neighboring territories to visit each other. It became the symbol of cruelty and separatism. It was made in 1961. The strangeness of that construction was that it was set in the city. It became the division of the city. It was in Berlin. The former neighbors became the citizens of two different countries.

Citizens of East Berlin tried to immigrate to other part. The wall was to prevent the escape to the western part where people were freer. The wall existed almost 30 years. During that time more than 5 thousand people managed to escape. Lots of people died during that period trying to find a way out of GDR. Officially more than 130 people lost their lives in that struggle for better life.

The fall happened in 1989. It was declared that people from both sides could visit each other. It happened on the 9th of November. Thus, those days the wall was destroyed.

From that time the tradition of celebrating the day came into people’s life. They annually celebrate the victory over the regime of communism. “What day National Freedom Day in 2022?” It’s on the 9th of November.

What does Freedom Day mean for Berliners and the people from other countries? The date is an obvious symbol of the great eagerness of being free. For many years friends and relatives couldn’t reach each other. They couldn’t see and follow relatives’ lives. They even couldn’t express their love because of the wall.

The aspiration of freedom was so strong that the Berliners came to destroy the wall themselves. They took every stone and threw away. Many people tried to preserve a small part of the wall for remembering the fair of the captivity and the feeling of happiness on the day.

People from other countries prefer to remember about the possibility of such situation. This fact helps them to understand the importance of life and freedom. It helps people to value their lives and to feel satisfied with their lives.

The humanity should value everything they have. They should love their relatives and follow family traditions with great honor. There are lots of countries and places which have many problems with freedom. Many people aren’t free and independent. They are forced to labor and war. Liberty is the main right of every representative of the mankind.

When is International Freedom Day 2022? There are many variants of such holiday in many countries. Americans follow the observance on the 9th of November.

The word was noticed to be used in the 10th century. Nowadays it has got a very wide meaning and several synonyms. The term is used to express the state of liberty and being free. It is used to express physical and mental feeling and state.

It is also the absence of outer control and interference. People who feel it can be regarded as free. Across many nations the word is interpreted as the independence in politics, national expression and individual state. A person who is under control or is held in jail can’t be regarded as a free individual.

Besides these meanings the word expresses the absence of various properties. It mainly used for bad qualities which people try to get rid of. When they manage to do that, they say that they are free of the quality. The next thing is the absence of obligations.

When individuals hear the name of the holiday, they understand that it concerns a good matter. The so-called holiday exists in many countries. The truth is that it is used for different reasons. Some nations celebrate the liberty day when the nation became free from the dominating country or slavery. Other nations chose a special occasion in the world history and admitted its importance for commemoration. Such reason made the American President to propose the idea of the day’s celebration.

What is the date of World Freedom Day 2022? It is set on the 9th of November. 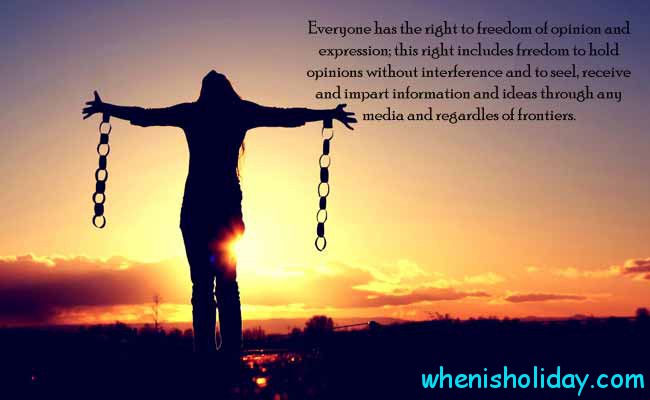 The traditions of the day are set by every nation and social group. The occasion is an official one, so the President and Government take part in different events. The youth organizations of the country propose various social projects connected with the idea of liberty. The students of earlier age are usually proposed to think over the term itself, the possibility of sudden invasion and people’s actions during that period. The main idea of such projects refers to the mental abilities of the youth. They are to value the present being and the possibility to live free.

Reagan is regarded as the main participant of the struggle with communism, so the Americans always recollect him during the date. His life and deeds are analyzed throughout the country. The readings about that US President are popular not only in the USA, but also in other countries. Adults can evaluate the importance of his participation in the actions that time.

Another politician who played a significant role in the process of destroying the regime in Berlin was M. Thatcher. She was the Prime-Minister of the United Kingdom and jutted for the fall of the Berlin Wall. She understood the absurdity of the fence which was the symbol of communism and cruelty. The information about significant individuals can be found in the internet. It is a chance to understand the reasons of the Berlin Wall’s fall.

To find the information in the internet is very simple. It’s better to write a request “When is Freedom Day in 2022, calendar of holidays in the USA?”

When is National Mentor Day 2022