The constitution of any country is essentially a collection of rules that serve to define its political system, powers of governing institutions, as well as civil rights and obligations. The Constitution is often called the Basic Law, because it takes the supreme position over all other laws. For many countries, the adoption of the Constitution is associated with revolutions or wars of liberation, for others it became a decisive step on the way to sovereignty. Ukraine is no exception – our Constitution was adopted in the fifth year of independence. This long-awaited and significant event for Ukrainians took place on June 28, 1996, and since then every year on June 28 we celebrate a national holiday — Constitution Day of Ukraine.

How did the idea of ​​celebrating the Constitution Day of Ukraine come about?

Freedom-loving Ukrainians have long aspired to independent statehood, and therefore to the writing of their own Constitution. Not everyone knows that the first of the constitutions of all European countries was the Ukrainian one. It all started with the Battle of Poltava in 1709 – after the defeat in it, Hetman Ivan Mazepa and part of the Zaporizhzhya Army moved to the city of Bendery. Mazepa soon died there, and on April 5, 1710, the Cossacks elected a new leader – Pylyp Orlyk. Along with the election of the hetman, the Constitution was adopted, which consisted of 16 articles.

The Constitution of Pylyp Orlyk, or, by another name, the Bender Constitution, declared that Ukraine was free from both Poland and Moscow. The Orthodox faith was affirmed under the auspices of Constantinople, state borders and foreign relations were established. As for the internal structure, the interaction of the hetman with his subordinates was regulated by a kind of parliament, which was represented not only by the military leadership, but also by ordinary Cossacks.

This one Constitution actually declared Ukraine an independent state, leaving only the protectorate of the King of Sweden from foreign influence. Unfortunately, the provisions of this document were not destined to become effective, but it is still considered a conceptual evidence of the democratic preferences of the Ukrainian nation.

In the period 1845-1847, members of the Ukrainian Cyril and Methodius Brotherhood created an unusual project – the Constitution of the Slavic United States. It was a supposed state with the capital in Kyiv, which united the Slavic peoples of Europe, with the exception of Russia. The creators of the unrealized but progressive document took the US state system as a model, as well as the American principle of equal rights for all citizens.

After the collapse of the Russian Empire in 1917, Ukraine once again tried to establish itself as a separate state. The Central Council of the Ukrainian People’s Republic voted the Basic Law, which proclaimed parliamentary rule, equality of civil rights and freedoms, and local self-government. But it so happened that on the very day of the adoption of this document, April 29, 1918, as a result of a coup, Hetman Skoropadskyi gained power. He immediately dissolved the Central Council and canceled the laws adopted by it, including the Constitution.

The collapse of the USSR

Ukrainians got the next chance for their own Constitution only after the actual collapse of the USSR. In 1990, Ukraine declared state sovereignty, and on August 24 of the following year, it chose independence for itself in a referendum. After that, the need for the Basic Law became extremely urgent, so in 1992 its draft, prepared by the Constitutional Commission, was made public for public discussion.

The Constitutional Commission received about 50,000 proposals from Ukrainians and processed them, and in October 1993 presented the final draft of the Constitution to the Parliament. But at this stage, due to contradictions between the Verkhovna Rada and the president, the process stopped. To some extent, they were able to unblock the situation in 1994 after early presidential and parliamentary elections. On June 8, 1995, the president and deputies signed the Constitutional Treaty, which regulated the administration of the state during the year before the new Constitution appeared.

However, the struggle between the executive and legislative powers continued, so another draft of the Basic Law was created – the presidential one. At that time, Ukraine was the only country of all the former Soviet republics without its own Constitution. Finally, the parliamentary draft was adopted on June 4, 1996 in the first reading, but on June 19, the second reading failed, not having received the required number of votes.

At the same time, a serious crisis in state management was brewing, because the Constitutional Treaty had already expired. On June 26, 1996, the National Security Council and the Council of Regions expressed outrage at the delay in the constitutional process, and the president scheduled a referendum on the adoption of his own version of the Constitution for September.

Realizing the threat of removing the parliament from approving the Basic Law of the country, the very next day the deputies of the Verkhovna Rada adopted a resolution on considering the draft Constitution in the second reading and decided to carry out this work non-stop, agreeing not to leave the meeting hall even at night until the final vote takes place.

However, it was not easy to come to an agreement on all the contradictions. There were disputes between parliamentarians regarding the state language, national symbols, the distribution of powers between the presidential and parliamentary branches of government, the status of Crimea, and other important issues. In the end, on the morning of June 28 at 9:20 a.m., 315 deputies voted for the adoption of the Basic Law, and this day will forever go down in history. Finally, independent Ukraine received its Constitution.

Constitution Day of Ukraine in history

Who in our country is considered the “father” of the Basic Law?

This is Mykhailo Syrota, one of the Constitutional authors, who on the decisive night presented all the articles before the vote on the rostrum of the Ukrainian Parliament.

What does the Ukrainian Basic Law see as the main duty of the state?

Article 3 of the Constitution of Ukraine declares the provision of human rights and freedoms to be such an obligation.

How many drafts of the Ukrainian Constitution were there?

From the beginning of independence until 1996, there were 15 different drafts of the Constitution created by various political forces, special commissions, and scientists.

Was the Ukrainian president present at the meeting of the Verkhovna Rada on “constitutional night”?

No, the then president Kuchma was not present in the parliament at night, but he appeared there in the morning, a few minutes before the decisive vote. Then there was a short speech by the president, in which he gave the adoption of the Constitution historical significance.

How many articles does the Ukrainian Constitution contain?

The 14 chapters of the Basic Law of Ukraine contain 161 articles. The 15th section was formed from the transitional provisions.

How to celebrate the Constitution Day of Ukraine?

This event is a public holiday, which, by the way, is established by itself by the Constitution — its 161st article. Therefore, official state events dedicated to the anniversary of the adoption of the Ukrainian Basic Law take place every year on June 28. Ukrainians are greeted by state leaders of the highest rank, national flags are installed on buildings.

Usually, local self-government bodies organize festive gatherings with the participation of city mayors, local council members and the public. This event is timed to award the best employees of various institutions with certificates of honor and other awards. Also, many educational events take place on Constitution Day — thematic book exhibitions, seminars on explaining constitutional norms. Educational institutions and libraries are especially actively involved in such events.

It doesn’t work Day of the Constitution and without entertainment – concerts, contests, festivals, flash mobs are also often organized on this day. And since this holiday is an official holiday, many Ukrainians plan short but interesting trips, a trip to visit, a meeting with friends or a picnic for this day. And if there is an opportunity to add a couple more days of vacation to this weekend, then you can easily arrange a vacation at the sea, in the country or a full-fledged tourist trip.

First of all, acceptance Constitution means that the state has gained a certain stability. This happened in Ukraine as well, because it was then, after the change in the social system, that a new civil society was formed. .

But the main significance of our basic law lies in the content of its articles, which testify that Ukraine is a democratic, legal and social state. And since this document is fundamental from the point of view of legislation, all other laws and in general the activities of the state should be oriented specifically to the Constitution.

Constitution Day of Ukraine is a strong unifying factor for the country’s population, because even the staunchest political opponents were able to reach an agreement during the adoption of this document. Therefore, the Constitution gives society the opportunity to come to an agreement, if not on all, then on the vast majority of controversial issues.

Unfortunately, far from all the norms prescribed in the Ukrainian Constitution operate in reality. This primarily concerns the social and legal obligations of the state, so our authorities have a lot to work on, implementing the constitutional provisions in life. At the same time, Constitution Day reminds every citizen of how important it is to respect the Constitution and adhere to its postulates, because only in this case can we hope for the sustainable development of our country in a democratic direction.

Postcards for the Day of the Constitution of Ukraine 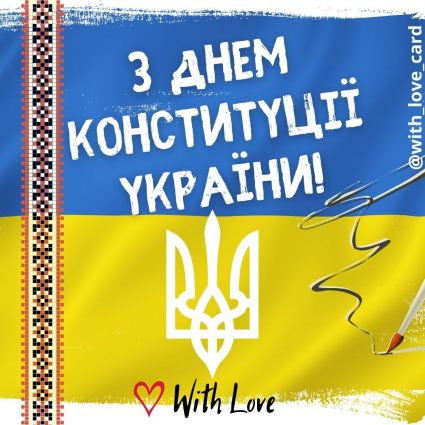 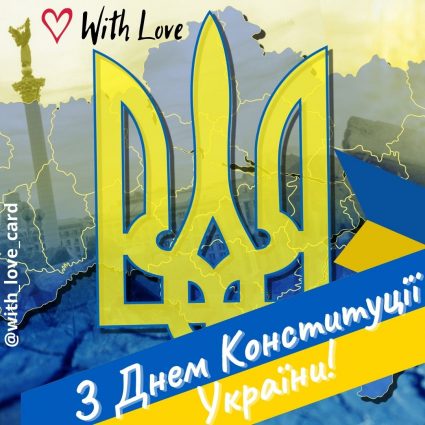 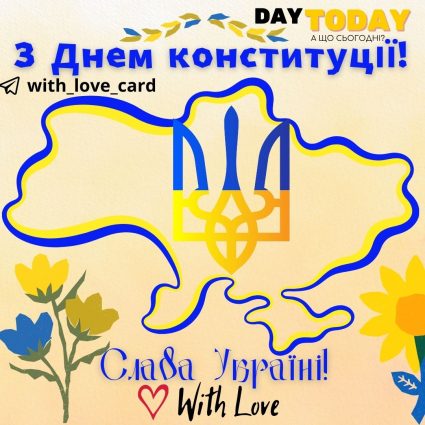 When will we celebrate the Constitution Day of Ukraine? 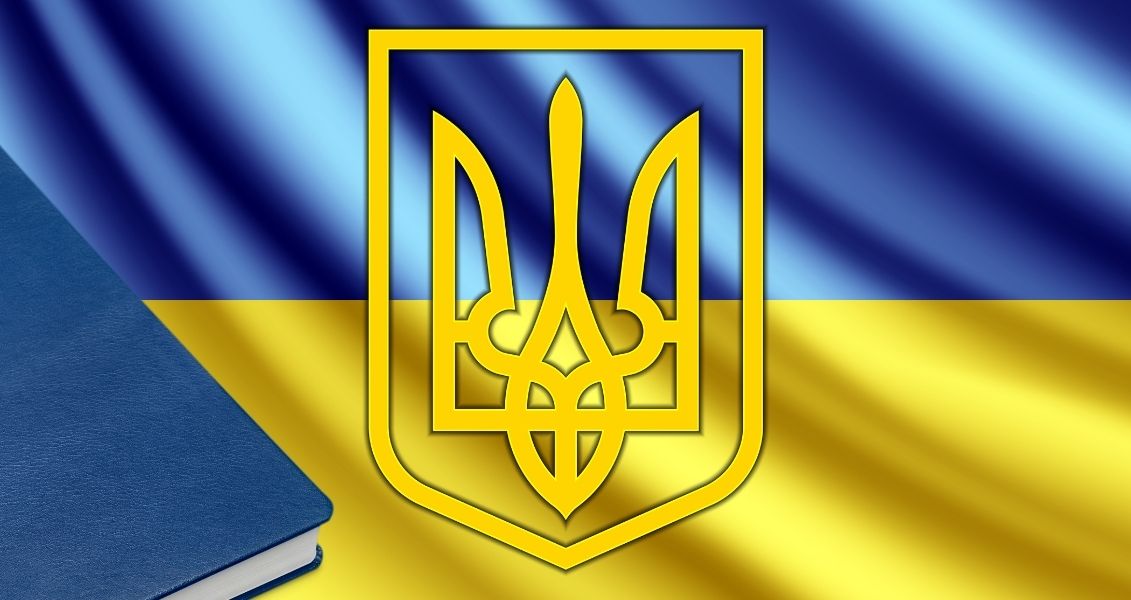 Day of the technical support worker