On March 25, gourmets and sweet lovers all over the world celebrate a very tasty holiday, which is called International Waffle Day. It is known that the first waffles were enjoyed by the inhabitants of Ancient Greece. Since those times, desserts with “cookies in a cage” have developed, new recipes have appeared. Temptingly fragrant, extremely tasty and with a crispy crust, waffles are an exquisite dessert that is loved and baked all over the world. By the way, Americans have their own waffle holiday, it’s called National Waffle Day and is celebrated on August 24.

How did the idea of ​​celebrating the International Waffle Day come about?

Waffle day began to be celebrated in the Scandinavian countries. People who live there simply adore this dessert. In Swedish, the name of the holiday sounds like Vaffeldagen. It coincides with Spring Women’s Day. It is interesting that there are exactly 9 months from this holiday to the Catholic Christmas. Believers of the Catholic Church believe that it was on March 25 that the Archangel Gabriel announced to the Virgin Mary that she was pregnant and would give birth to the Savior of the world.

Although directly related to the church celebration Waffle day does not have, but it was on this day that Swedish women left all their winter chores and started doing spring chores. And one of them was baking delicious waffles with deep honeycombs. In 1620, the recipe for waffles came from Holland to North America.

Such a dish as waffles has been known since the 13th century BC. The ancient Greeks baked flat pancakes, pressing them with two plates with a pattern in the form of honeycombs. The plates were made of metal and connected to each other with a hinged mechanism. In this way, the liquid dough was poured onto one plate, pressed with the other and put on an open fire for baking.

Thanks to the simple recipe, quick preparation and high taste qualities, lakomin quickly gained popularity in Europe. They were mostly sold by street vendors. There are many recipes for waffles. They can be prepared from flour and water, and you can add additional components: eggs, milk and honey.

There are more than 100 varieties of waffles in the world, not to mention the number of recipes. Thin, thick, crispy, fluffy, with berries, with vegetable filling, etc. We will introduce you to the most popular ones.

Austrian – they are also called Viennese. These are soft, lush and thin waffles with a juicy filling. They are tasted cold. Without adding filling, the dish is served hot and additionally decorated with berries, ice cream or any syrup. Viennese waffles are often used in the preparation of waffle cake.

English waffles it is difficult to classify it as a dessert, rather it is an ordinary snack. During their preparation, potato or oat flakes are added to the dough. While still hot, the waffles are rolled into a tube, which is filled with various vegetable fillings and sauces.

American – Americans are very fond of waffles and they have their favorite recipes. It is worth saying that American waffles differ from their European counterparts in taste and shape. These are usually fluffy and soft products that are served with sweet or salty dishes. To prepare them, soda or baking powder is added to the dough.

Belgian waffles familiar in two interpretations: Liège and Brussels. The first are crispy and hard products of a rounded shape, baked with caramelized sugar. Brussels waffles, on the contrary, are soft and fluffy, because they are made on the basis of yeast dough. They are eaten cold or hot, sprinkled with powdered sugar or syrup.

A feature of the recipe Dutch waffles there is the use of caramel syrup, which, during hardening, glues two sheets of pastry together. Dutch waffles are also known as strop waffles, which translates as “waffles with syrup.”

Czech payments, originating from Karlovy Vary. Two sheets of pastry are neatly glued together with a syrupy filling that is almost imperceptible. Mineral water and pieces of almond nuts are added to the dough during the preparation of waffles.

Italian pizzelli despite their name, they have little in common with pizza, rather they are thin sheets of wafers in the form of a flower. The pastry is tasted in its usual form or rolled into a tube for fruit filling. A special pan with a special flower shape is used to bake pizzelli.

Crow – Norwegian waffles, which look like waffle tubes filled with condensed milk. This is a traditional sweet dish served to the table in Norway at Christmas.

How to celebrate International Waffle Day?

There are several things that must be done on this day. Get together with friends and visit a cafe where delicious waffles are prepared. You can also find recipes for popular varieties of this pastry on the Internet and prepare waffles for your family and friends. However, you will need a special pan for baking, which can be purchased at home and kitchen appliance stores.

Another idea to celebrate and spread this day is to hold a master class for acquaintances or sell freshly baked waffles on the street.

We wish you an extremely tasty one Waffle day!

When will we celebrate International Waffle Day? 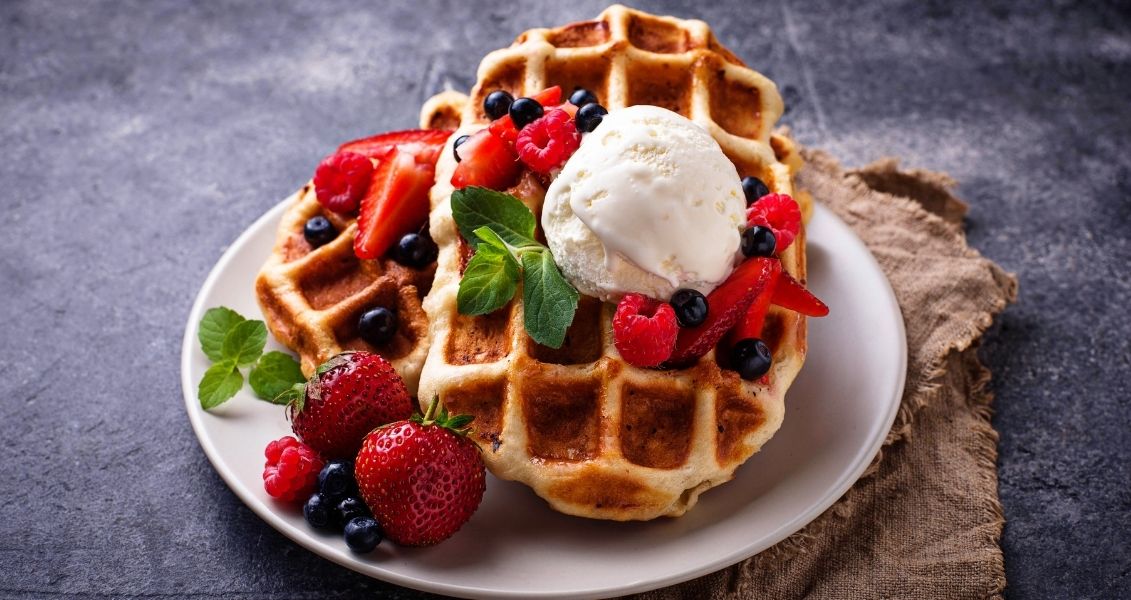