A unique musical style based on improvisation, which arose in the USA during the time of slavery, was called “jazz”. Its deep roots lie in the musical and cultural traditions of the African continent, but European music also had a significant impact on the formation of jazz. Since jazz appeared in the midst of disenfranchised slaves, it is still considered a music that symbolizes freedom, equal opportunities and the fight against injustice and oppression. The initiative to hold a holiday dedicated to this musical style belongs to the American jazz pianist and composer Herbie Hancock, and in 2011, according to the official decision of UNESCO, April 30 was announced International Jazz Day.

How did the idea to celebrate International Jazz Day come about?

The birthplace of jazz was New Orleans, a city in the south of the USA, which was distinguished from others by its deep connections with Europe. Most of the city’s residents were French-speaking Catholics, had fairly liberal views, and appreciated good food, wine, music, and dancing.

However, the cultural life of New Orleans was filled not only with European traditions, because in the early 1700s, a third of its population was made up of black slaves. On Sundays, they gathered on the outskirts of the city to dance to drum music. This area later became known as Congo Square, a kind of African-American cultural center.

The music of the time was also influenced by brass bands, which became very popular in the US after the Civil War. In the 1890s, piano compositions called ragtime appeared, and brass bands began to add them to their repertoire. In the end, the combination of sensual blues, orchestral march, folk African rhythms and ragtime created a new musical style unlike anything else, with a bright loud sound and improvisation of the musicians, thanks to which the compositions sounded new every time.

The musical world owes the creation of one of the first jazz bands to the cornetist Buddy Bolden. Soon, other New Orleans musicians – Freddie Keppard, King Oliver, Jelly Roll Morton, Sidney Beche and Louis Armstrong – managed to gain popularity. Jazz quickly found supporters all over the country – it was played on steamboats that plied the Mississippi, on trains with touring musical groups, on the radio. The 1920s in the USA are usually called the jazz era, and it was then that the system of playing appeared, which was called “swing”.

Jazz was constantly developing – thanks to George Gershwin, its elements were combined with classical music, Duke Ellington founded the first big band – a new type of large jazz ensemble. With the onset of the Great Depression, the demand for jazz records declined, and jazz seemed to be losing ground. However, from the mid-1930s, big bands gave it a new lease of life — the orchestras of Duke Ellington, Benny Goodman, and Count Basie were hugely successful, as were jazz singers Billie Holiday, Frank Sinatra, and Ella Fitzgerald.

After the Second World War, a new direction of jazz emerged – be-bop, with a faster tempo, more perfect harmonies and more complex improvisations, which took jazz beyond purely commercial music. The new generation of jazz musicians was represented by Charlie Parker, Dizzy Gillespie, and Thelonious Monk.

In the 1950s, jazz bandleader Miles Davis and saxophonist Lester Young introduced cool jazz, a calmer and more relaxed style. The experiments did not end there, and the Blue Note jazz label surprised the audience with new options – hard bop and soul jazz.

With the rise of rock and roll in the 1960s, jazz clubs began to close and musicians lost their jobs. In an effort to improve the situation and expand the boundaries of style, some musicians began to add elements of rock and roll to jazz – this is how fusion jazz was born. Miles Davis’ team became a star in this direction. Brazilian guitarist and composer Antonio Carlos Jobin tried to combine jazz and samba, resulting in the birth of a new direction of jazz – bossa nova. In the 1970s, neo-swing appeared — a mixture of elements of cool jazz and be-bop.

Classic jazz styles, such as Dixieland, big band and swing, have also retained their following. The jazz orchestras created by Duke Ellington and Count Basie did not lose popularity even after the death of their founders, and the groups of Woody Herman and Stan Kenton created new arrangements of the music of the composers of the swing era.

In the Soviet Union, jazz was often criticized and accused of ideological inconsistency. The first jazz band led by Valentin Parnakh appeared in 1922. In 1927, Oleksandr Tsfasman’s “AMA-Jazz” orchestra recorded the first jazz album, and Leonid Utyosov’s band soon appeared. In the 1950s, Oleg Lundström’s orchestra became one of the leading jazz groups in the country. In the future, the orchestras of Yuriy Saulskyi, Iosif Vainshtein, the Riga Pop Orchestra gained popularity; performers Oleksiy Kozlov, Mykola Levinovskyi, Ihor Nazaruk and others.

To this day, jazz continues to evolve with the help of a new generation of musicians who create innovative sounds and challenge conventions, but what remains constant in this music is improvisation and the sense of freedom it gives to performers and listeners.

What are called jazz standards?

In jazz, it is customary to name well-known compositions, for example, “Summertime” by George Gershwin, “Round Midnight” by Thelonious Monk or “Fly Me To The Moon” by Bart Howard.

Which jazz composition has the most performances?

This is the song “Summertime” written by George Gershwin for the opera “Porgy and Bess” in 1935. The song has about 40,000 cover versions sung by various artists. The most famous version belongs to Ella Fitzgerald and Louis Armstrong.

What is a jam session?

These are creative meetings of jazz musicians in their free time, where joint playing of instruments with improvisations takes place, competitions in professional skills are possible, and new ideas are exchanged. Listeners can also be present at such meetings, but this is not a mandatory condition, because jam sessions are arranged by musicians primarily for their own pleasure.

How does jazz differ from other musical styles?

The main feature of jazz is the freedom of rhythm, which gives the performers a feeling of freedom and lightness. Jazz is characterized by a special rhythmic pattern, which is called swing, and this music completely depends on the inspiration of the performer at the time of playing, on his emotions and state of mind.

What instruments are most often used in jazz music?

Any musical instrument is suitable for performing jazz, but the most common for this style are the cornet, saxophone, double bass, piano, drums and guitar.

How to celebrate International Jazz Day?

Every year on April 30, concerts, parties in jazz clubs, festivals of jazz music take place in the cities of different countries. Educational lectures are also held for schoolchildren and students, thanks to which they learn about how this musical style arose and developed. The International Jazz Day website offers materials each year to help organize activities for this celebration.

The best way to celebrate International Jazz Day for lovers of this music, visit a live concert or a jam session. However, if this is not possible, online concerts, recordings of your favorite artists or programs on the radio will come in handy. Those who are just beginning their acquaintance with jazz should listen to the classics – Louis Armstrong, Duke Ellington, Benny Goodman, Billie Holiday, Charlie Parker, Miles Davis.

To learn more about the history of jazz and the lives of famous musicians, you can read interesting books, for example, “Autobiography” of Miles Davis, “Bird. The Legend of Charlie Parker” by Robert Reisner, “A Jazz Odyssey. Autobiography” of the composer Oscar Peterson. Movies about jazz and jazz musicians, such as “Obsession”, “Ray” or “Lady Sings the Blues” will also contribute to immersion in the world of sensual music.

The main purpose of this holiday is to draw attention to jazz as a musical style, and to remind that jazz, which began with slavery, became a symbol of the fight against social inequality, racial prejudice and discrimination. Jazz as a phenomenon proves the fact that music is one of the best tools in the world for achieving mutual understanding between people.

Jazz combines collective and individual creativity – the harmony of the entire orchestra and the work of each individual musician are equally important, because self-expression is at the heart of jazz, and virtuoso soloists in this style have always been extremely popular. Playing jazz at a high level is difficult, so only the best professionals who have the ability to improvise and high skill work in this style, which means that they are always pleasant and interesting to listen to.

Jazz music helps fight stress, so it is often played in the background in spas, and jazz lovers are 25% less likely to become depressed than others. Soft and slow jazz melodies reduce nervous tension, and fast compositions charge energy. Therefore, you can choose a suitable composition for each mood depending on personal preferences. Special studies have shown that jazz, thanks to its rhythm, is able to stimulate mental abilities and helps focus, as well as promotes creativity and out-of-the-box thinking.

In general, jazz is incredibly beautiful, sensual and romantic music. It is not as popular as, for example, rock, but for true fans it is a lifelong passion.

When will we celebrate International Jazz Day? 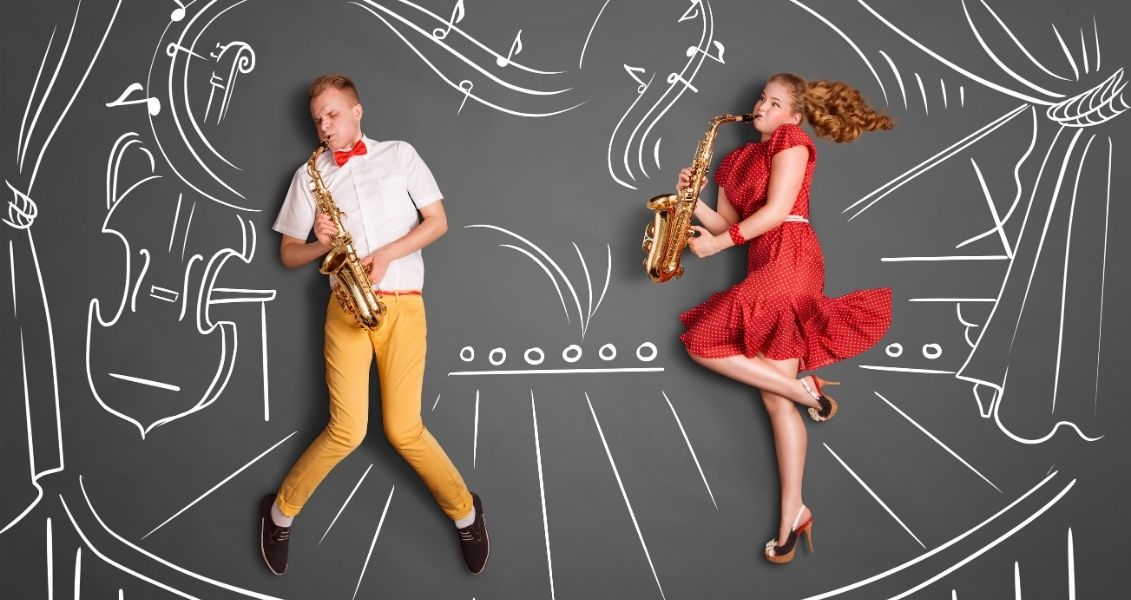