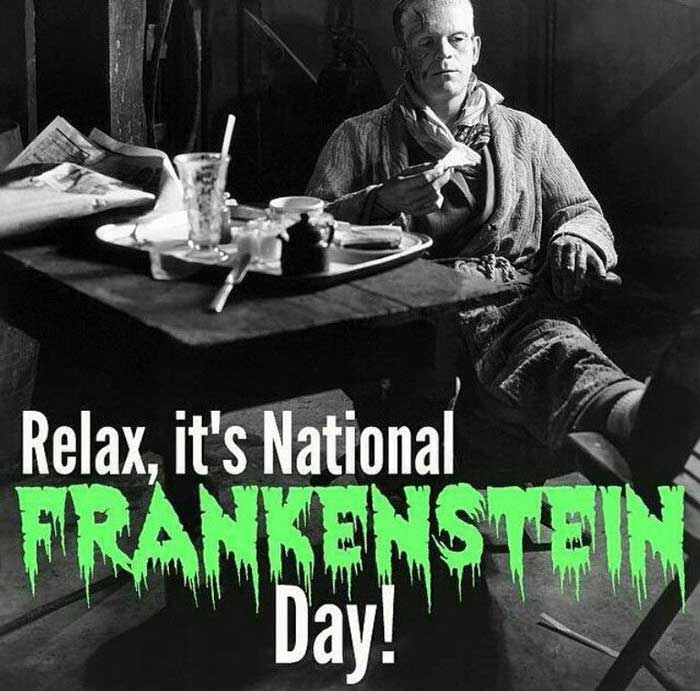 When is National Frankenstein Day in 2022? – Can you reply it? Well, if your answer is negative, do not get worried or upset. You know, the most part of modern people are not ready to answer this question. Your surprise to the existence of this occasion in the contemporary calendar just means that you are among all those men and women. However, we find this occasion to be rather amazing one, so today we are going to introduce it in detail. Would you like to join? We are starting.

All in all the matter what day Frankenstein Day in 2022 is seems to be really interesting. As a rule, everybody likes to know something unusual and mysterious. The story about the poor monster belongs to this category. The date of the holiday was taken not occasionally. August 30th is a day when the birthday of the famous writer is celebrated.

Soon after the novel appearance, there were many versions about who actually its author was. Some people were sure that the book was written by Lord Byron, others by Mary Shelley’s husband Percy. However, later it was recognized that Mary Shelley herself was the author.

According to biographers, the novel was written by chance in the rainy summer of 1816 on Lake Geneva. The company, which consisted of the poet Percy Bysshe Shelley, his wife Mary, her half-sister Claire, as well as the poet Lord Byron and his physician John Polidori, had to spend a lot of time at home. For entertainment, they read aloud and discussed “scary” stories of ghosts and bloody murders.

Lord Byron and Shelley talked frequently and at length, and Mary was their diligent but almost silent listener. They once discussed various philosophical issues, including the secret of the origin of life and the possibility of discovering and replicating it someday. It was decided that the revival of matter would take a different path. Perhaps it will be possible to revive the body.

Once Byron suggested is friends to write something following this theme. Everyone enthusiastically agreed. For several evenings Mary told her friends a terrible and tragic story. J.G. Byron was struck by the extraordinary literary talent of this nineteen-year-old woman and advised her to write down her fiction. Thus was born “Frankenstein”, which is a wonderful novel about a scientist who in many ways anticipated the science fiction of the 20th century.

What does Frankenstein Day mean? – Well, are you really sure that we can give the answer to this question instead of you. We do not know for sure whether this occasion is essential for you. You see, unfortunately, among the representatives of the modern society there are a lot of those men and women, who have never read this book. Thus, as you can understand they do not know about the main characters of the work, so most likely they are not going to celebrate the date.

At the same time being written almost two centuries ago, the book has left a deep mark on European and American literature.

Today the contemporary critics can safely say that “Frankenstein” is at the origins of the genre of science fiction. This, with a dark but unusually strong energy, is a story about a scientist whose unique invention turned into a tragedy for him as well as for the whole surrounding. This is a novel about a great achievement and a fatal mistake of human genius. It anticipated the pessimistic motives of a number of modern science fiction works.

It is no coincidence that already in the 20th century, many writers took this plot. The story itself was filmed a lot of times. Up to the present moment, Victor Frankenstein is considered to be the main character in the author’s novel, as well as a hero in many books, dramatic and cinematic adaptations of the storyline.

Read more:  Independence Day of the Republic of Honduras

The question “What is the date of Frankenstein Day in 2022?” involves a lot of amazing pieces of information.

Being born in 1797 in Great Britain, Mary Shelley lived a short and not very happy life. Having written several works before Frankenstein, she continued to engage in literary work even after it. Unfortunately, her other works were not so successful and broad public has never heard about them. However, the story about a monster is well-known even today in 21st century. All in all, following the critics “Frankenstein” by Mary Shelley is in the list of the most famous phenomena of world culture.

“Frankenstein” is a story, which came beyond the forms of the typical for that period “Gothic” novel significantly. However, together with other works it managed to form in the European literature, a particular romantic novel structure. It opposed to the widest spread of poetry. In their turn, the excessive descriptions of the monster’s cruelties could serve as proof that the young author belonged to the Gothic. It seems okay, but at the same time the readers shouldn’t forget about the sublime intonation characteristic, which is typical for romantic literature.

When is Frankenstein Day in 2022, calendar will surely remind you. However, you have to be rather careful in order not to forget about the date of Mary Shelly’s birthday. It is held in particular circle on August 30th annually.

Of course, it would be quite silly to expect that the local authorities will organize something special devoted to this holiday. However, you are always free to celebrate the occasion if you like. For example, you may read this novel once again or watch a movie with the same storyline. Invite your friends and relatives and organize their good talking on this theme. It would be a great experience for everybody.

The question “What is the date of Frankenstein Day in 2022?” involves a lot of amazing pieces of information. Some of them are even unknown for broad public.

Many films show the main character as a successful monster. He kills without hesitation because he is terrible as to its origin and nature. The creature is clearly a maniac, because what else can you expect from an animated corpse with long-term rotten brains!

But in the book, Frankenstein’s creation is not so much a villain as a deeply tragic character. All his murders are not associated with the manifestation of bestial cruelty or mindless lust for blood.

In some cases, circumstances force him to do all these things. For example, when there is the necessity to save his life. In other situations, he does it in order to achieve his goal and to return to his creator and hold him accountable for his own lonely and terrible life. His judgments and actions are in many ways naive and wrong, but he is able to awaken sympathy in the reader.

Shelley claimed that it was she, who came up with her doctor and his name. However, on the territory of the contemporary Germany there is a castle with the exact same name – Frankenstein. Biographers believe that Mary could have been there with her husband and found out its story. In the late 17th – early 18th centuries, the castle belonged to the German alchemist Johann Konrad Dippel. Like all followers of this pseudoscience, Dippel was looking for the key to immortality and even created an elixir called “Dippel’s Oil”, which was supposed to help people extend life up to a hundred years. The alchemist experimented a lot and, according to rumors, even poked around in other people’s graves, dug up parts of human bodies and then boiled them in a huge vat to create an artificial creature. To move the soul from one body to another with the help of a funnel, a hose and lubricant, he, however, did not succeed.