Every company has its own data which is very important for business and development. It has to be under security. It is a need to take effective measures to avoid risks connected with incidents and frauds. The modern world is close to cyberspace which is dangerous because of various cyber viruses. The threat is so great that individuals and organizations think over new ways of security of the information and discuss the improvement of the existing methods. The best time to think over the effective ways of the data security is to observe a special occasion. When is World Backup Day in 2020?

Nowadays the backup in IT is rapidly developing. People always look for solutions which can help save the personal and corporative information. It is obvious that methodologies and technologies should become more complex. The inventions which were connected with the storage process appeared thousands years ago.

Information in the IT sphere began being stored in the 50s of the 20th century. The first elements that could store information were punch cards and vacuum tubes which were used internal storage. This method can’t be considered as reliable enough, though specialists used them to restore information. This kind of safety process is considered as the first generation. The inventors of the method were Eckert and Mauchly who created the Universal Automatic Computer (UNIVAC I).

The next stage of the backup came ten year later. The use of punch cards seemed very slow, that’s why magnetic tapes came into the use in the 60s of the previous century. These new things were more efficient and capable. It was a real success because the amount of data seemed huge in comparison with punch cards. One tape could store such amount of data as 10 thousand cards stored. Its cost was rather low. This kind was popular for more than 20 years. If you want to watch the history of the developing the platforms, follow the calendar and find what day National Backup Day is. The observance is set on March, 31.

Read more:  Day of employees of archival institutions of Ukraine

The hard drives appeared in 1956. It was the IBM invention. In the 80s this item became one of the main components of personal computers. The popularity of this kind of backup was supported by other vendors. The Hitachi’s invention could store more than 1 GB. In the 1990s the RAID technology was introduced.

The first hard drives weren’t very popular. They were extremely expensive, large in size and their capacity was low. Nowadays this kind of storage is popular because it can store a huge amount of information. It’s also rather cheap.

In the 2000s the popularity of floppy disks was really impressive. It was created in the end of 60s of the 20th century. The first variant wasn’t rewritable. It needed some technical improvements. Thus, in 4 years it could store much more information and became rewritable. This variant was very popular as it was much cheaper than hard disks. Home users liked such backup.

The next stage of saving information was the invention of the next generation. The invention in 1979 of a compact disk by Sony and Philips let business store their files. CD-R and CD-RW became very popular among corporations and later among ordinary people. In the middle 90s users got the better variant, DVD. It could store more than 4 GB of various kinds of data. Besides, it became rather cheap.

Flash drivers appeared in 1998. Nowadays they are popular throughout the whole world due to their low cost and great capacity. In 2006 HD-DVD and Blu-ray disks appeared. They have gained the public popularity. Several years ago the new stage of storage was developed. Online and network backup solutions continue being developed alongside with the means of security of data. The start of the observance happened in 2011. When is International Backup Day 2020? It’s on March, 31.

What does Backup Day mean in the modern world?

Cyber threats nowadays lead to great problems and disasters. The amount of them is impressive. They are more pervasive. Security is one of the weakest spheres in the business architecture. Data can be stolen. Business is always ready to spend big amounts of money to defend the data and corporate information. The main core of every security department is to prevent cyber breaking-in. Other point is to envisage the recovery of the system.

The occasion raises awareness of the cyber crimes and to think over the plan of self-defense. People of business don’t usually reduce costs spent on the security processes. They prefer to prevent the interruption of their business process because of cyberattacks. Besides, they can be made not just to interfere the process, but also to steal business information. If someone spends great amount of money to break your business, why not spend much more money to prevent such frauds.

The reasons of the system breaking or data losing can be various. One of them is a physical disaster. Backup is extremely important in such situation. Besides, every company or organization needs strict instructions that are to be followed by every employee.

Data losing is one of the main troubles of the present world. People store gigabytes of data on their PCs and laptops. Mobile phones also store thousands of personal photos and videos. System and a hardware failure also can lead to the trouble. People should think about backup at least once a year. What is the date of World Backup Day? It’s on March, 31.

The term appeared in 1910 in a meaning “something that gives support or can be a substitute”. Later the word was used also as an adjective and a verb. A person who provides assistance can be also named as a backup. In the IT sphere the term is mainly used as a copy for storing computer data.

Read more:  International Day of Remembrance of All Labor Victims 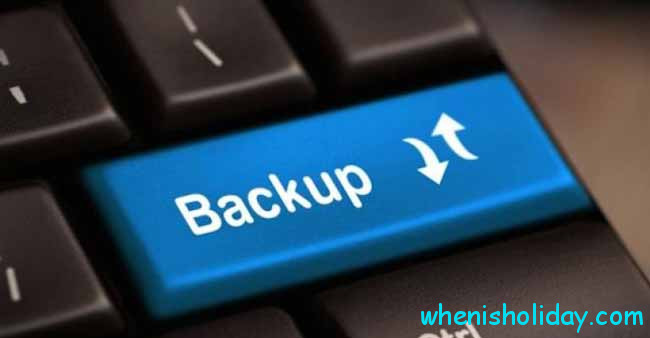 The term also means the process of storing itself. It contains the copying the data into archive files in order to restore them if necessary. All professional sources insist on two purposes of the backup. It is necessary for avoiding corruption or deletion of data. It‘s also important for re-using and portability the important information.

Data is the main content of the modern world. Bank and governmental, medical and educational systems, personal computers need much attention because of different threats. Physical failures and internet break-ups lead to great financial loses. Secure organizations and IT companies propose various new methodologies and ways of saving information. Many international events are provided in the world to discuss the main problems of cybersecurity.

Personal computers also need to be safe. If you are sure in your antivirus program, you shouldn’t forget about physical failures of the system. If you store videos and photos on your hardware, you should think about restoring the information on other platforms. DVDs, CDs and USB flash drives are the simplest ways. Online platforms are also very popular nowadays. The choice is very individual. The best way to save the important information is to use different variant simultaneously. If you want to get knowledge about all possible methods is to follow the occasion. When is Backup Day in 2020, calendar of webinars and events is available before the observance.

International Day of Remembrance of Victims of Genocide Crimes