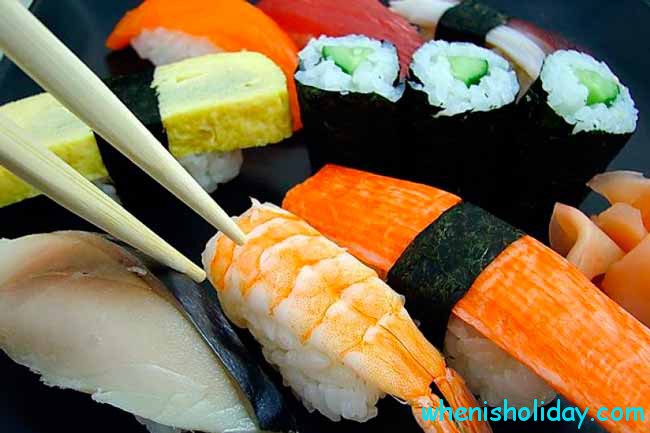 In the international cuisines there are a lot of different dishes, which can seem unusual or even strange. But among them also there are those, which in the course of time become popular all over the planet. For example, nowadays the answer to the question “When is National Sushi Day in 2022?” may be given not only in Japan but in almost any corner of the civilized world. The general amount of the experienced National Japanese dish lovers grows every day. Frankly speaking that is the main reason, why we are going to tell you about this special occasion in details.

Every year, all people, who adore these delicious rolls, kept International Sushi Day, which is celebrated on June 18. Despite the fact that the holiday has no official status, it is quite popular among fans of Japanese cuisine.

When is Sushi Day in 2022, calendar will tell you without any problems. But, as a rule, we want to know the historical background of any special occasion. This information helps us to understand the situation better.

All in all the relatively short history of the holiday is pretty boring and has in general nothing to do with any events held in Japan or elsewhere in the world. The event was invented in 2009 by a guy named Chris De May. This person was quite unknown before he created his own Facebook page, which was devoted to this product. This Internet source became rather popular among various this National Japanese dish fans from around the world.

In the course of time, Chris also came up with the idea to celebrate International Sushi Day on June 18. He formulated his idea in the very simple way: “You see, every day of the year without and exceptions should be called Sushi Day, but, like any wonderful things, these roll deserves its own day.” In such a simple way a new tradition was born in the world.

We can’t but mention that in the late 70-ies, the first specialized sushi robot was invented. It was discovered that one line, in which each robot performs one or several operations, from rinsing rice to wrapping each item in a polymer film, is able to replace several dozens of professional sushi cooker. At the same time all the issues of technological processes, hygiene and sanitation are considered to be very important as nowadays this Japanese national dish specificity depends on the human factors. The use of sushi robots is expanding rapidly, although there is a widespread belief that it must be prepared by a person.

What does Sushi Day mean? All in all that is one more reason to regale ourselves with tasty food. It is a favorite dish of many people all over the world. They are low-calorie and at the same time nourishing. And the sushi is very good ingredient for those who are on a diet.

It is believed that it is enough to spend one fasting day with these delicious products per week, and your diet will be more diverse. In some cases it is better to cook this dish yourself, in such a way you will be assured of its quality, and at a price you will get much cheaper.

Finding the answer to the question “What is the date of National Sushi Day 2022?” you have to know about this dish as much as possible.

It is prepared from rice with fish or seafood. There are also sashimi – seafood with the addition of vegetables and seaweed. All these products are extremely useful because of rich content of minerals, amino acids, phosphorus, vitamins, iodine and the mass of other substances we need. Our body, receiving such assistants, successfully fights against various diseases. In the course of time you will see the positive changes in the person appearance, as well as in the brain working.

Do you know its qualities? Rice is a great supplier of fiber and complex carbohydrates. The first stimulates digestion, the last – a source of carbohydrates. For its ability to purify the body of toxins from rice, rice is often used in diets. Rice contains a lot of potassium, which regulates blood pressure. In its turn potassium neutralizes any harmful effect of salt entering the body with food. Seafood is represented by protein and aphrodisiacs. Moreover, it is just very delicious foods.

Algae Nori helps the development of a healthy skeleton and a system of blood vessels. This involved calcium and iron. Nori seaweed is rich in iodine, necessary for our mental activity. Wasabi is the root of a plant with a similar name. It is used as an additive to soy sauce serving to sushi.

So you have already found out the answer to the question “When is International Sushi Day 2022?” But do you know how to celebrate these items day? As a rule, the answer is quite obvious: go to the nearest sushi restaurant, order it to home or even try to cook them yourself.

Frankly speaking, it does not really matter which variant you prefer, the main thing is to enjoy the taste of one of the most popular dishes in the world.

In you have enough time and desire, you can organize a special sushi party or the thematic evening in the Japanese style. You can have in at home, in the club or even in the garden. The decorated premises will be rather appreciated. What about the red Japanese lanterns or fans with patterns or hieroglyphs? The participants, both men and women, may dress the traditional costumes. As a rule, this evening will be really unforgettable for everybody. 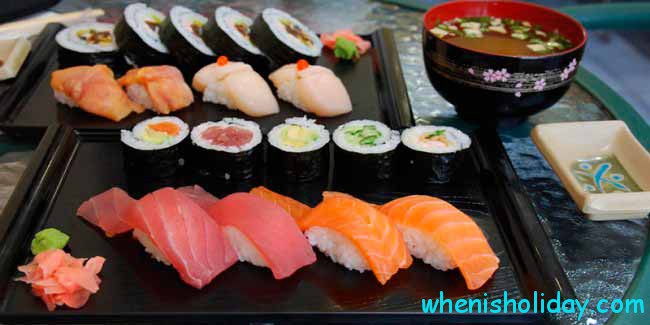 In the most part of Japanese restaurants the administration still refuses to hire women as cooks. The matter is that many connoisseurs do not want to eat this dish, prepared by the woman chef. In their opinion, all women have a higher body temperature, so they can’t cook such a delicious dish. They are sure that even a difference of 2-4 degrees affects the product taste of the product. That is a real problem. Because the ladies from all over the world, having known the answer to the question, what day International Sushi Day in 2022 is, want to celebrate this event preparing something tasty at home.

Nowadays almost 80% of the world’s supply of bluefin tuna goes to specialized restaurants.

By the way it has been found out that the most expensive bluefin tuna was sold in 2009 at the auction of the main market in Tokyo for $ 100,000. This price is ten times higher than the normal amount. In 2010, in early January, a red tuna, which was weighed 232 kg was sold, already for 122 thousand Euros.

In 2014 at the World Conference of Sushi in Japan requested equipment under the Sushi Magic brand was recognized as the best device for sushi preparation. But professional sushi masters often continue to traditionally cook sushi in a traditional way.

One of the delicacies of Japanese cuisine is called “Dancing Perch”. – The perch is covered with boiling water, immediately poured with sauce, cut into pieces and eat. Although the fish continues to reflexively flap its tail and move the lips.

On October 12, 1997 600 Japanese people created the longest roll in the world. It was more than a kilometer in length.

The pickled ginger has a pale yellow-pink color. Ginger acquires the usual pink hint due to food colorings.

The caviar of flying fish (tobiko) in its natural form has a reddish-orange hue. In the case of necessity producers paint it in different colors with food colors.

According to the latest research of British scientists, 68% of people between the ages of 18 and 70 do not know the difference between trout and salmon.