A soft ruddy bun, a crisp cool salad, ripe sweet tomatoes, and in the middle a juicy, well-seasoned beef patty – there are probably few people in the world who do not recognize a hamburger in this description. In the USA, it is considered one of the unofficial national symbols, along with jeans and Coca-Cola. And in the rest of the world, this food is extremely popular due to its taste, nutrition and affordability. 75 hamburgers are sold every second only in the McDonald’s network, so it is not surprising that people have dedicated a special holiday to such a simple, but such an appetizing patty bun – every year, July 27 is celebrated around the world Hamburger birthday.

All holidays and events for July 27

How did the idea to celebrate Hamburger’s Birthday come about?

It is known that minced meat, that is, minced meat, is an extremely ancient culinary invention. This is evidenced by the recipe book of the ancient Roman gourmet Marcus Gabius Apicius, where there is a description of a dish made of finely chopped meat mixed with crushed nuts and spices.

Also, the appearance of minced meat is associated with the army of Genghis Khan, which, as is known, moved around on horseback. Warriors spent a lot of time on the road and often did not have the opportunity to stop to make a fire, so they invented an original way of cooking meat – pieces of lamb or beef were placed under the saddle, and during the movement it softened and turned into minced meat. It was eaten raw, only salted, and at the same time they did not even get off the horse.

When the Mongols conquered Kievan Rus, first the Eastern Slavs, and from them the Europeans adopted the simple idea of ​​recipes from minced meat. The French created “steak tartar” (the name is directly related to the word “tartar”), that is, a dish made of finely chopped raw beef with the addition of onions and eggs. Another version took hold in Hamburg, where it took the form of minced meat baked in breadcrumbs. By the 17th century, dishes made from minced meat became very popular in Germany – it was fried or stuffed into sausages.

From the middle of the 18th century, German gastronomic traditions began to reach England and already in 1802 the term “Hamburg steak” was added to the Oxford dictionary, which meant sliced ​​beef, lightly smoked and mixed with onions and breadcrumbs.

Salted and smoked dishes were ideal for long sea voyages, so Hamburg steak crossed the Atlantic Ocean on ships that brought thousands of emigrants from Europe, including Germany, to the New World. Some of them opened their restaurants in the USA, necessarily including meat cutlet in the menu. It is interesting that the Germans themselves did not call it Hamburg steak, but “Frikadelle” or “Bulette”.

But hamburger is not just a cutlet, but a combination of it with a cut bun, and this idea is already considered purely American. However, there are many contenders for its authorship. One of them is Charlie Nagrin from Wisconsin. In 1885, he sold Hamburg steaks at a local fair, but business did not go well – the hot patties were inconvenient for customers to eat on the go. Without thinking long, Charlie placed the patty between two slices of bread and called his creation a hamburger.

In the same year, brothers Frank and Charles Menches from the state of Ohio went to sell pork sausages at a fair in a city called Hamburg, although it was located in the state of New York. Sausages were in demand and soon pork for their preparation ran out. However, the brothers did not find it on sale, so they bought beef, made cutlets from it and put them between pieces of bread. The Menches brothers named this sandwich a hamburger in honor of the city in which the fair was held.

Residents of Oklahoma claim that their countryman Oscar Bilby made the first hamburger with a bun instead of bread. On July 4, 1891, on the Independence Day of the United States, he had the desire to combine meatballs, fried by his own hands on the grill, with yeast rolls, which his wife Fanny had prepared himself, and treat all the neighbors in honor of the holiday.

The popularity of hamburgers grew, and in 1904 they were presented as a product at the World’s Fair in St. Louis. In 1916, Walter Anderson, a chef from Kansas, patented a special hamburger bun, and in 1921, he opened the first White Castle fast food restaurant in Kansas, in which the main offer was a hamburger for 5 cents. Soon, small cafes and roadside eateries began selling hamburgers along with fries and milkshakes.

During World War II, other countries were introduced to hamburgers thanks to American soldiers who tried to cook them with their own hands. The opening of “McDonald’s” restaurants was already a real triumph of hamburgers – only by the end of the 1950s, this chain sold 100 million of them.

Today, hamburgers are easily available in almost every corner of the world. Of course, the concept of the dish has evolved over time – meat cutlets and buns are complemented by a variety of creative and tasty ingredients. Even the most expensive restaurants do not hesitate to serve hamburgers to their visitors.

The birthday of the hamburger in history

Which hamburger is known as the most expensive in history?

In 2005, the Fleur restaurant in Las Vegas offered a hamburger for $5,000. The dish contained, in addition to the actual buns and cutlets from a special type of beef, foie gras and truffles and was served with a bottle of elite champagne.

Are there defined standards in the production of hamburgers?

Such standards were developed by the US Department of Agriculture – a hamburger should be in the form of a sandwich between two halves of a round bun. Mustard, mayonnaise, ketchup and other seasonings along with side dishes of lettuce, tomatoes, onions and cucumbers make up the traditional dressing. The meat for the cutlet must be beef without extraneous products or fillers and contain no more than 30% fat. The ideal fat content is 15%.

Which hamburger is the most caloric in the world?

The Heart Attack Grill restaurant in Las Vegas serves a hamburger called the Quadruple Bypass, which includes 4 pieces of 227-gram beef, 8 slices of cheese, 20 rings of caramelized onions, 20 pieces of bacon, 8 pieces of tomato, a tablespoon each of mayonnaise and mustard, two tablespoons of ketchup. A hamburger contains 9,982 calories and is listed in the Guinness Book of Records for this.

Why environmental organizations consider the production of hamburgers harmful to the environment?

Since 14,000 liters of water are needed to produce one kilogram of grain-fed beef, and a considerable amount of greenhouse gases are released during the production of one hamburger, hamburgers can be considered one of the factors contributing to negative climate changes.

Do hamburgers from “McDonald’s” really not spoil and mold even after several years?

Many experiments really confirm this fact. However, this is not due to the sky-high amount of preservatives, but due to the low moisture content in the finished product – both buns and cutlets are prepared at a very high temperature. So if the hamburger is not stored in an airtight container, it will most likely not go moldy, it will just dry out.

How to celebrate the birthday of a hamburger?

It is clear that the highlight of this day is actually hamburgers, so almost all restaurants prepare promotional offers in advance and offer visitors the best options for this dish.

In turn, customers are happy to take a break from their diets and order a variety of hamburgers, especially since there are many varieties for every taste. So you should join the hamburger lovers on July 27 to give yourself a taste pleasure. You can also order hamburgers to work to treat your colleagues.

If there is time and desire, a great solution would be to cook hamburgers at home. To do this, it is appropriate to organize a barbecue and grill party, invite family and friends, and let everyone demonstrate their favorite sauce recipes and ways of cooking meatballs. Having shown even more creativity, it is interesting to try dessert, that is, sweet hamburgers, the filling of which can serve as ice cream, nut paste, sweet bars – everything that imagination suggests.

This light and positive holiday is impossible not to love, just like hamburgers themselves, and the main reason is that they are very tasty. In addition, now hamburgers are favorably regarded even by opponents of meat, because a meat patty can easily be replaced with healthier options, for example, a patty made of beans or salmon, although such hamburgers can no longer be considered traditional.

In addition, in each country, manufacturers adapt to local tastes and customs, for example, in Japan you can order a rice hamburger, and in India – a hamburger made of peas and vegetables, which meets the dietary restrictions of Hindus.

Hamburgers are extremely affordable, which is why they have appealed to gourmets from various social groups – they can be eaten both in small eateries and in elite restaurants awarded with Michelin stars. Of course, the prices will vary according to the level of the establishment, but you can hope that the taste will be excellent in any case.

Sometimes our important memories are connected with hamburgers – for example, about the first date, the first job at a fast food restaurant during the student years, or a summer picnic with a particularly nice company.

Making hamburgers with your own hands allows you to fully express your creative abilities in the kitchen, because the traditional hamburger recipe is basic, so you can change it as much as you like and add your favorite products or spices.

When will we celebrate the birthday of the hamburger? 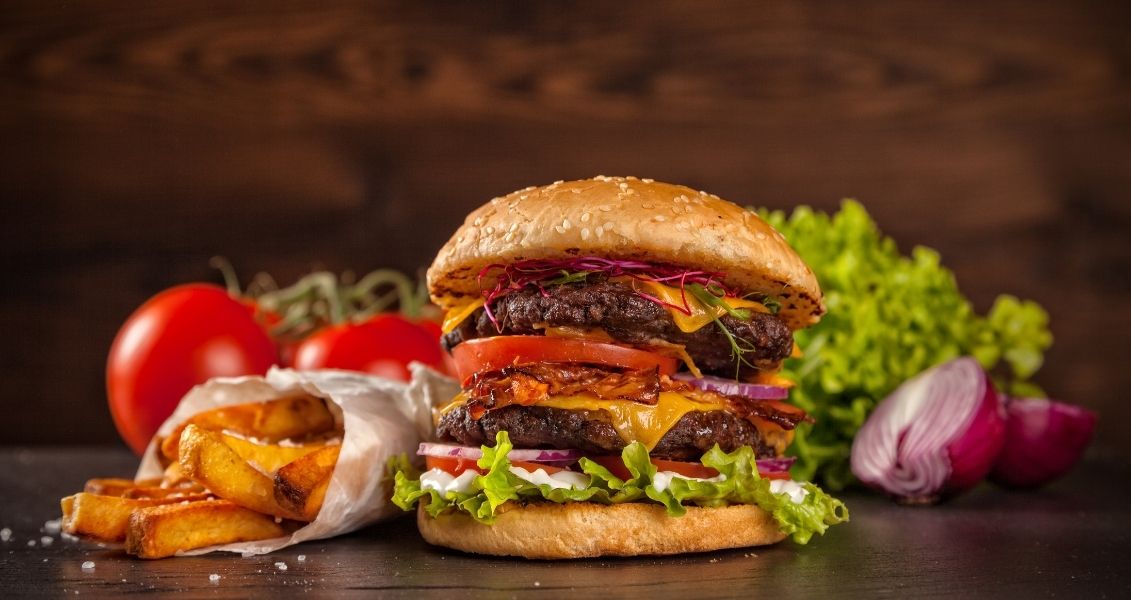