Since ancient times, the life of our people has been inextricably linked with the Dnieper, the largest river in Ukraine. The Dnipro provides millions of people with drinking water, irrigates hundreds of thousands of hectares of crops, makes it possible to generate electricity and is a transport highway. The baptism of Russia took place in the waters of this river, and the spirit of an independent Cossack state reigned on its thresholds. The Dnipro is important not only for Ukraine, but also for Russia and Belarus, through whose territory its path runs. Unfortunately, today this river suffers from environmental problems, so in order to draw attention to them, a special holiday has been established – International Dnipro Daywhich is celebrated every year on the first Saturday of July.

How did the idea of ​​celebrating the International Dnipro Day come about?

Leakage Dnipro is located on the territory of Russia – in the Smolensk region. There, the river flows through a mixed forest and is barely visible for the first few kilometers. Downstream, the Dnieper is getting bigger and bigger thanks to the confluence of tributaries. By size, the Vyazma River, on which the city of the same name stands, stands out among them. The first city on the Dnieper is Dorohobuzh — about 200 kilometers from its source. Near this city, two branches of the Dnipro form the first large island about 2 kilometers long.

Up to Smolensk, which is 400 kilometers away from its source, the Dnieper channel is rather winding, and then becomes more straight. The river flows mainly in the western direction. The last Russian settlement on the Dnieper is the village of Krasne, located on the right bank of the river, while the left bank is already the territory of Belarus. Near the Belarusian city of Orsha on the Dnieper there are barren sections, and the current becomes much faster. After Orsha, the river changes its direction and flows from north to south.

Below the city of Mogilev, the width of the river valley increases, a wide floodplain appears. From here to the border of Ukraine, the Dnipro has many twists and turns, and in some places it has not one, but two channels. In Belarus, three large tributaries flow into the Dnipro: the Drut, Sozh, and Berezyna rivers.

On the territory of Ukraine Dnipro passes a little north of the mouth of Pripyat, and its right bank gradually becomes higher. A well-known feature of the Dnipro is the rapids that stretch for about 100 kilometers in the section between the Dnipropetrovsk region and Zaporizhzhia. Before the construction of reservoirs, the water level difference on the rapids reached 31 meters. Below the rapids on the Dnieper lies a large island – Khortytsia.

The first written memories of the Dnipro

The first written evidence about Dnipro left by Herodotus in his descriptions of Scythia, dated 450 BC. The ancient Greek historian saw the river full of water, with clean and tasty water, with many fish, and described the banks of the Dnieper as fertile fields and rich pastures for livestock with tall grasses.

For thousands of years, many peoples lived on the banks of the Dnieper – Scythians, Sarmatians, Goths, Huns, but the role of the river significantly increased only during the formation of Kyivan Rus, when the city of Kyiv appeared on the high right bank. During the heyday of the Slavic state, the Dnipro was an artery that connected it with other lands from the Baltic to the Black Seas. However, after the Mongol-Tatar invasion and the decline of Kyiv, the Dnieper route almost lost all its advantages.

The importance of the largest Ukrainian river grew rapidly with the development of free Cossacks in the 16th century – the Zaporizhzhya Sich arose on the lower Dnieper. The location of Sichi changed many times, but during their entire existence, Cossack lands gravitated to the banks of the Dnieper, because the river allowed the Cossacks to reach the Black Sea by boat and protect their native land from foreign invaders.

After the death of Bohdan Khmelnytskyi, the wars between the contenders for the hetmanship divided Ukraine along the lines Dnipro on Livoberezhna and Pravoberezhna, and at the end of the 18th century, the entire territory of the Dnipro basin completely came under the power of the Russian Empire. The river was used for transportation, fishing, and mill work.

The Dnipro began to experience significant interference in the form of human activity in the 20th century. While hydroelectric power stations were not built anywhere in the world on lowland rivers, numerous hydroelectric power plants were built on the Dnieper in Soviet times. This disrupted the river’s ability to self-purify, it began to silt up and silt up, besides, huge areas of fertile floodplains were forever buried under the reservoirs.

Natural river filters were also flooded — Dnieper rapids. Fish wealth has almost been destroyed – now it is hard to imagine that such sturgeon species as sterlet and beluga were once common in Ukrainian rivers. Artificially raising the water level in the Dnieper by dams causes the death of small rivers, because the current slows down in them too.

Pollution of the river waters of the Dnipro

Pollution of river waters is a separate topic Dnipro basin cities with their communal and industrial enterprises, as well as agricultural lands, garbage dumps and other sources of human economic activity. In addition, in 1986, a lot of radioactive substances got into the waters of the Dnipro after the accident at the Chernobyl nuclear power plant.

Some scientists predict the complete death of the Dnipro in about 300 years, if measures are not taken to restore it today. Environmental organizations of Ukraine, Russia, and Belarus took up the problems of the river. In 2002, they founded the International Dnipro Day at the Dnipro Forum. Since then, on the first Saturday of July, this holiday is celebrated in three Slavic countries at once, and it is especially popular in those cities and villages located directly on the banks of the Dnieper.

Frequent Questions and answers about the International Dnipro Day

How long is the Dnipro?

In terms of its length, the Dnipro river is second only to the Volga, Danube and Ural rivers in Europe — the length of its basin from north to south is more than 1,000 kilometers. The length of the channel itself used to be 2.3 thousand kilometers, and after the construction of the Dnieper Cascade, it was reduced and, according to various sources, is from 2.1 to 2.2 thousand kilometers.

What are the largest cities located on the Dnieper?

On the territory of Russia, such is the city of Smolensk, in Belarus – the cities of Orsha and Mogilev. The largest cities in the Ukrainian part of the Dnipro are Kyiv, Cherkasy, Kremenchuk, Kamianske, Dnipropetrovsk, Zaporizhzhia, Nikopol, Kherson.

What types of aquatic animals mainly inhabit the Dnipro?

Crustaceans, molluscs and fish are typical inhabitants of the waters of the Dnipro. Species diversity of fish is poorer in the north and richer in the south. Amphibious animals are also common in the Dnieper — frogs, toads, and frogs.

How many tributaries does the Dnipro have?

The number of tributaries of the Dnieper is counted in thousands, and each of them affects its volume and water quality. The largest tributaries are the Pripyat, Desna, Sozh and Berezyna rivers. Secondary tributaries include the Teteriv, Drut, Irpin, Trubizh, Ros, Sula, Psel, Vorskla, Samara, and Ingulets.

Which island on the Dnieper is the largest?

This is the island of Khortytsia, the area of ​​which is about 3 thousand hectares. In 1993, Khortytsia was granted the status of a National Historical and Cultural Reserve. On the island there is the Museum of Cossacks and the historical and cultural complex “Zaporizka Sich”. Khortytsya is part of the city of Zaporozhye.

How to celebrate the International Dnipro Day?

At the international level and in Ukraine, forums and scientific conferences of ecologists are usually dedicated to this event, where the current state of affairs is discussed Dniproas well as the search for ways to solve its problems.

On this day, almost all domestic mass media pay attention to the largest river of Ukraine – articles with interesting information about the Dnipro are published, blatant facts of human negligence in relation to this river are highlighted, significant historical events that took place at different times on the banks of the Dnipro are mentioned.

Most festive events are usually held in Kyiv, the largest city on the Dnieper. Among them are open competitions in swimming and fishing, special entertainment programs on the beaches, flash mobs, concerts, photo exhibitions of picturesque river landscapes, promotions on stocking the Dnipro. Also, as in other Dnieper cities, public organizations organize cleaning of coastal zones and beaches from garbage, which all interested citizens can join.

However, you can make your contribution to the happy future of Dnipro not only on a holiday, and absolutely everyone can do it. Reasonable consumption, responsible waste management, economical attitude to water resources, use of phosphate-free detergents — all this will contribute to the fact that the main Ukrainian river can become cleaner and healthier.

This day reminds the governments of all three countries in which the Dnieper catchment is located, about the need for permanent preservation of this important water body, and also draws public attention to the threatening ecological state of the river.

Dnipro provides two-thirds of the territory of our country with water supply. More than 50 large cities of Ukraine are located on its shores. That is why the quality of river water is so important, because the health of Ukrainians directly depends on it. Rest on the Dnieper beaches, tourism, water sports also play an important role in our lives, so everyone should try to preserve this majestic river for themselves and for future generations.

In Ukraine, environmental protection activities face difficulties in the form of imperfect legislation and limited funding. The most important is the treatment of wastewater at sewage treatment plants, but there are still very few real successes in this matter. Therefore, the International Dnipro Day is designed to stimulate the introduction of modern technologies, primarily at large enterprises. The minimization and processing of waste, the fight against the clogging of coastal strips, the proper operation of hydraulic structures, and the protection of fish from poaching are also important.

International Dnipro Day encourages the public to carry out useful actions, for example, clearing riverbeds, planting trees on the banks, cleaning the area. This holiday emphasizes that the Dnipro is an integral part of Ukraine and deserves not only constant attention, but also careful treatment.

When will we celebrate the International Dnipro Day? 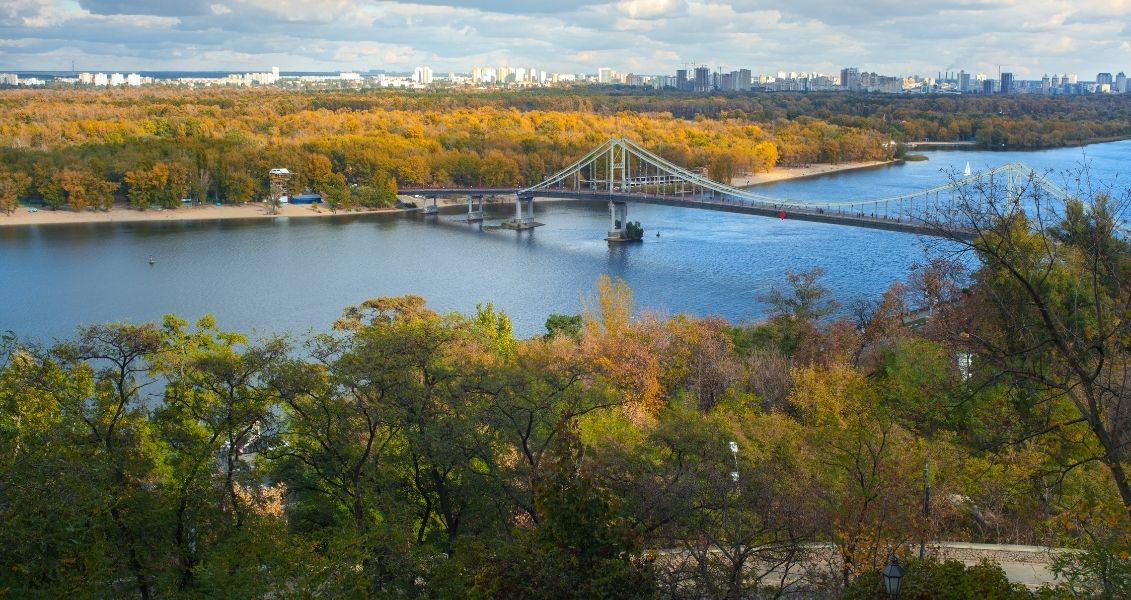