Rivers are like arteries without which the living organism of the Earth cannot function. The river biosphere has the highest level of biodiversity, but in the last 50 years freshwater plants and animals have lost 80% of their populations, which are declining at twice the rate of marine species. Dams, excessive water intake and pollution of river water, as well as climate change — all this threatens the health and general existence of rivers on our planet. In order to emphasize the value of the year, to draw the attention of mankind to their problems and to promote environmental protection actions, a special holiday was established — World Rivers Day, which is celebrated every year on the last Sunday of September. In 2022, this event falls on September 25.

How did the idea to celebrate World Rivers Day come about?

The entire surface of the Earth is essentially river basins, formed over millions of years by streams of fresh water. Natural river systems are thought to have functioned throughout the geological record since the continents first received sufficient rainfall to support surface runoff. In the sediments of the Precambrian period, scientists discovered shallow sand, deltaic sands were also found in the rocks of the Cambrian era. Of course, since that time, the rivers of our planet have repeatedly changed their channels, but the oldest river systems are at least 100 million years old.

The sources of the rivers are located on the hills or mountain peaks – rains and meltwater run off from the highlands, forming fast mountain streams, which, as they descend, increase in volume due to their tributaries and become rivers. On the plains, rivers slow down and begin to meander, looking for the path of least resistance, and eventually flow into lakes or seas.

River water is fresh, that is, it contains less than one percent of salt. Despite this, all the world’s rivers carry about 4 billion tons of salt from the land to the ocean every year, and some form a so-called estuary, where salty seawater mixes with fresh river water. An example of this phenomenon is the Hudson River, in which brackish water extends 150 miles (240 km) upstream from its mouth.

There are always human settlements on the banks of rivers – since the distant times when our ancestors began to abandon the nomadic lifestyle of hunters and gatherers. It is not for nothing that the valleys of the Euphrates, Tigris, Indus and Nile are called the cradles of the first civilizations – they provided entire nations with drinking water, a variety of food of vegetable and animal origin, provided the opportunity to irrigate fields, graze cattle, performed the function of physical and psychological borders between states and at the same time were routes for traders and conquerors.

The dark side of water

However, rivers carried not only life – quite often fertile floodplains and human settlements were at risk of destruction by large-scale floods. The oldest “Epic of Gilgamesh” mentions a great flood arranged by the god Enlil. Many peoples have similar legends, from the Jews of the Old Testament to the native inhabitants of America.

The role of rivers as a source of life and fertility is reflected in the beliefs and legends of many cultures. Rivers were often called “mothers” and associated with deities, for example, in Ancient Egypt, the floods of the Nile were considered the tears of the goddess Isis. In the beliefs of the ancient Greeks, the underworld also had its own rivers. They were Styx, Phlegethon, Acheron, Cocytus and Leta, each of which had a function in the underworld.

The rivers, gifted to mankind by nature, were originally crystal clear, but over the centuries became polluted with untreated sewage, leading to epidemics of infectious diseases such as cholera and typhoid. But the beginning of truly large-scale pollution was laid by the industrial revolution, when factories and plants began to pour industrial effluents into rivers. Today, according to UNESCO, up to 70% of effluents from enterprises in developing countries are not subjected to any treatment before entering river waters.

The world’s rivers have also changed dramatically due to the construction of dams, and not for the better. A natural river is dynamic, it is constantly changing — it erodes its channel, finds a new one, overflows its banks, dries up in the dry season, but has an effective self-regulation system that does not allow it to die. Dammed rivers no longer regulate themselves – the structure prevents seasonal changes, retains silt, changes the chemical composition of the water and its temperature, and ultimately leads to the degradation of both the river itself and the coastal meadows, swamps and forests.

The founder of World Rivers Day was Mark Angelo, a well-known researcher and defender of the river biosphere from Canada. For a long time, he headed the environmental protection programs of the British Columbia Institute of Technology, was the chairman of the Pacific Council for the Conservation of Fish Resources, wrote several hundred articles about the problems of rivers and traveling on them, because he himself traveled around the world on a rowing boat for about a thousand years. Mark Angelo has been awarded Canada’s national honors as well as a UN award for his efforts to save rivers. From 2003 to 2006, Angelo’s Riverworld television program was broadcast across North America, and the program’s website was visited by over 40 million people.

So when the United Nations declared the decade “Water for Life” in 2005, Marc Angelo approached the organization with the initiative to establish World Rivers Day. The idea found support and since then, every year on the last Sunday of September, people pay tribute to the important role of all the world’s rivers and try to make efforts to protect them.

Why do some rivers have an unusual water color?

This phenomenon is explained by the dissolution of minerals from the soils and rocks through which the river flows, as well as by the influence of endemic aquatic plants. For example, the water in the Rio Negro, a left tributary of the Amazon, appears black from a distance, although it is actually the color of strong tea. The Caño Cristales river in Colombia is generally called the “river of five colors” – it changes the color of the water depending on the season and is yellow, green, blue, black and red.

Are there any countries in the world where there is no river?

There are only 19 such countries – three in Africa, five in Oceania, eight in Asia. Among the European states, only three do not have rivers: Monaco, the Vatican and Malta.

Which rivers on the planet are the deepest?

The deepest is the Congo River in Africa, the measured depth of which is 220 meters. The second place is occupied by the Yangtze River with a depth of 200 meters, and the third is the Danube (178 meters). The top ten deepest rivers also include the Zambezi, the Mekong, the Amazon, the Yellow River, the Hudson, the St. Lawrence River, and the Mississippi.

What is the longest river on Earth?

The title of the longest river belongs to the Nile, which flows approximately 6,650 km from the Great African Lakes through the Sahara, passes through 11 countries and flows into the Mediterranean Sea. However, in 2007, Brazilian scientists once again measured the length of the Amazon and declared that it is 6,800 km, that is, slightly longer than the Nile. However, this research has not yet gained recognition in the scientific world.

On which river in the world is the world’s most powerful hydroelectric power station built?

The largest and most powerful hydroelectric power station was built in China on the Yangtze River. It is called “Three Gorges” and has a capacity of 22,500 MW. The giant reservoir is a structure with a volume of 39.3 km3 it even affects the speed of the Earth’s rotation, extending the length of the day by 0.006 microseconds.

How to celebrate World Rivers Day?

If there is such an opportunity, then on the last Sunday of September it is worth going to the river – it doesn’t matter, big or small, known to the whole world or only to the inhabitants of a small area. Usually, a lot of garbage is collected on the shores of Ukrainian rivers, because not all people treat nature properly. Therefore, on this day, conscious citizens unite and arrange cleaning, sometimes not only on the shore, but also in the water, collecting plastic bottles and other rubbish on boats.

However, even without visiting the river, you can help it. For this, it is necessary to use only ecologically safe products for washing, washing dishes and personal hygiene, because everything that enters the sewers eventually ends up in our rivers. Saving water is also not superfluous in the matter of preserving the year, so you should close the faucet while brushing your teeth, watch the time when taking a shower, and start the washing machine and dishwasher only with a full load.

World Rivers Day is also a good reason for an active or relaxing vacation. If the weather permits, you can arrange a picnic for family or friends on the river bank, go fishing in pleasant company, go on a boat trip or take part in rowing competitions. Mountain rivers, in particular, in the Carpathians, give an opportunity to experience an extreme sport – rafting, to get vivid and unforgettable experiences.

Rivers, as before, have a special importance for civilization, because almost 3 billion people on the planet already experience a shortage of fresh water. Clean water in rivers is becoming less and less — mainly due to pollution and climate change. In addition to the physical scarcity of water in some regions, there is also an economic one, which means that governments are not able to manage freshwater resources properly.

Careless exploitation of rivers by people creates numerous problems. For river navigation, the channel is often artificially deepened, which leads to a decrease in the groundwater level and problems with agricultural land. In addition, lock systems and navigation dams seriously disrupt river ecosystems.

Water pollution is no less threatening – pesticides, herbicides, phosphates and nitrates from the fields make the water toxic, certain types of algae multiply in it, the oxygen content decreases, and as a result, freshwater plants and fish die. Insufficiently treated sewage and industrial effluents also destroy the normal biological function of rivers, adding all possible chemical substances and compounds to the water.

Given the threat of the situation, World Rivers Day is an extremely important event that simultaneously raises public awareness of the problem and encourages every conscious person to think about their personal contribution to the protection of our freshwater arteries.

When will we celebrate World Rivers Day?? 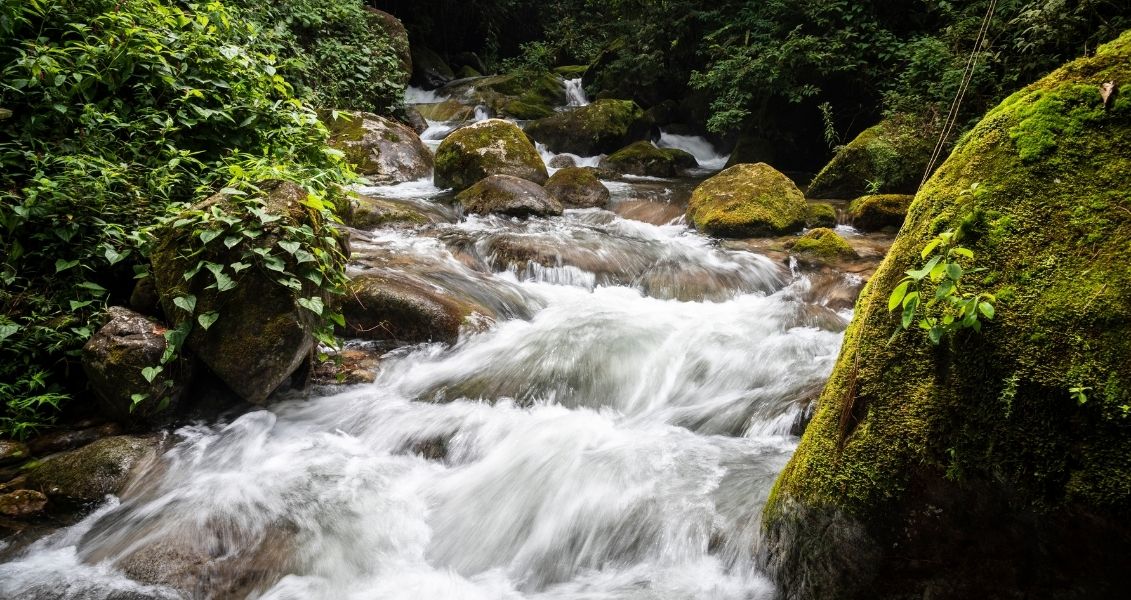 Memorial Day of the Holy Martyr Ignatius the God-Bearer