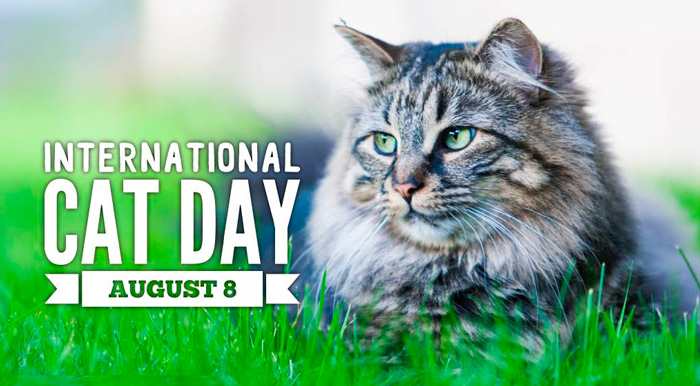 When is International Cat Day in 2022? Can you answer this question immediately and without hesitations? Or do you need some time for thinking about it? – As a rule, the most part of contemporary men and women reply negatively even under the condition we give them some minutes for thinking about. Actually it sounds really sad, as a lot of modern people have these animals as a pet and know nothing about their occasion. Today we are going to give you a chance to be involved into a new amazing holiday. Would you like to join? – We are starting.

Talking about the matter what day Cat Day in 2022 is, we can’t but mention the historical background of the event. As a rule, this direction draws a lot of attention from our followers’ side. Unfortunately, we don’t know the names of the holiday establishers as well as the reasons to hold it on August 8th annually.

In general these animals lived next to humans for 9,500 years. Their remains have been recently found in ancient burials on the island of Cyprus. The domestication began in ancient Egypt, and this process ended, according to some sources, only two hundred years ago.

There has been no consensus on why cats began to live with humans. According to one hypothesis, they were attracted to the human homes, where grain was stored. It meant that mice could always be caught. Scientists also refer to the fact that it is human nature to take care of the small and weak, as well as to catch and tame animals without any economic benefit from it. Men and women are ready to share shelter and food with cats, to take care of them as foster children. This is confirmed by the tribes of the Indians of North and South America, who also keep the creatures as pets, although they do not guard the house, do no physical work, do not lay eggs, do not give wool. People take care of them completely unselfishly, obeying their nature.

The history of mankind, however, does not give such a clear picture. In Egypt, the cat was deified along with other animals. And in medieval Europe, on the contrary, was considered a servant of the devil, a companion of witches. The animals are treated with caution in Japan. In Muslim countries, they are more tolerant than dogs. Hindus respect them, although they consider the animal a bad omen if it is crossing the road.

What does Cat Day mean? Frankly speaking, we can’t even predict whether this occasion means something special for you or not. As you see, we don’t know you personally, and we have never met you in reality, so we know nothing about your attitude to the holiday like this one.

Actually, among the representatives of the modern society there are some people, who do not like these funny creatures and the reasons may be quite different. Fortunately, there are not many of them. So it is only up to you to decide whether to join to this occasion celebration or to forget completely about it.

If you ask cat owners why they got such a pet, the answers will be different. For some, these animals seem small and unprotected, so they want to take care of them. Others will say that cats are easy to keep, they are clean and do not need any cage. The third likes the grace of these animals, their independent character and bright personality. The fourth will note that the cat’s hair is pleasant to the touch, and the process of stroking calms the nerves, reminiscent of meditation. We can add that cats are funny and intelligent, so they are never bored, and that they bring a piece of wildlife to our home.

Investigating the question “When is International Cat Day 2022?” together we can’t but mention the reasons of this occasion popularity.

These animals deserve to have their own holiday. Actually the explanation is quite simple and obvious. They have been and remain the most common pets in the world for centuries. For example, up to the present moment about 80% of the world’s population keeps a pet, and more than half of them have given preference to these ones. The cats are followed by dogs.

Read more:  All or Nothing Day or Extreme Day

Following the specialists’ points of view, cats perform a number of useful functions for humans. They perfectly kill rodents, treat some diseases and even prolong the life of their owner. For example, American doctors have found that cat owners are 40% less suffer from heart disease, and they more seldom have heart attacks and strokes. The most famous breed in the world is the Persian cat, which is followed by Maine Coons. The third place is given to Siamese.

By the way, the oldest cat was 38 years old, when it died. It was called Creme Puff and lived in the American town of Austin in Texas. The pet lived and enjoyed the owners from 1967 to 2005.

In the United States, the general amount of these creature owners is increasing. However, according to surveys, 17.4% of Americans do not like them (slightly more than 2% are against dogs). The biggest fans are the British, which is associated with the high activity of animal protection funds in this country.

Against this background, the number of so-called semi-owners of cats is growing all over the world. These are people who feed street animals, treat them, and raise funds for sterilization.

When is Cat Day in 2022, calendar will surely remind you. As a rule, there are no problems about it. The holiday is celebrated on August 8th annually. So the only thing you have to do is to memorize it.

As you perhaps understand it would be quite stupid to wait for any events organized on the state level by local authorities. However, there are a lot of private organizations, which are always ready to create a real holiday for your pet friends.

Usually there are also many sales on August 8th, so may buy some food or accessories with bargain.

Talking about the question “What is the date of Cat Day in 2022?” we can’t but mention the peculiar features of this special occasion. The matter is that the holiday is celebrated in various dates in different corners of the planet.

For example, in the United States, it is on October 29th. According to the internet resource, devoted to this event, the holiday has been celebrated since 2005. Up to the present moment, it is supported by the American Society for the Prevention of Cruelty to Animals.

In Japan, the special occasion is celebrated on February 22. Why? – The explanation is quite amazing! This is due to the fact that in Japanese language the meowing of this animal is sounded like “nan-nan-nan”. “Nanny” can also mean “two”, and “two-two-two” can be considered as February 22. On this day, Tokyo hosts a cat day festival, where these cute creatures win prizes for the most unique behavior. The festival has been held since 1987, when it was first organized by the executive committee together with the organization for the production of food according to the results of the survey.

In Poland, the holiday is kept on February 17. The participants of the holiday play with woolen balls and wrap themselves in multicolored threads.

Black Cat Day is celebrated in Italy on November 17. In the Middle Ages, black cats were actively killed by the Inquisition because they were considered devil’s helpers. Nowadays the Italians are trying to make excuses and with the help of this holiday they try to remind everyone that these animals are friends of people and are not guilty of anything.

Every three years, on the second Sunday in May, a cat parade is held in Ypres, Belgium.