Among cats, very cute fluffy cats of various colors, black ones have long stood out. It is a known fact that these animals quite often suffered from unfair treatment, because they were usually identified with black magic and bad luck. However, in some cultures it was the opposite – the presence of a black cat was considered a good sign. Over time, people realized that if black cats have differences from other purrs, it is only due to their particularly refined and elegant appearance, and any of them can become a favorite for the whole family. So a separate holiday is dedicated to these graceful creatures — International Black Cat Daywhich is celebrated every year on August 17.

How did the idea of ​​celebrating International Black Cat Day come about?

Black cats did not immediately gain a bad reputation – the color of their fur did not cause negative associations in ancient cultures. For example, in Ancient Egypt, the goddess Bastet was depicted as a black cat. This cat-goddess was the protector of women and the hearth, so she enjoyed universal respect.

All holidays and events for August 17

Cats in Egypt were also revered because they saved homes and granaries from mice and rats. At the same time, black cats were assigned a particularly important mission — they could supposedly drive away evil spirits from their owners. Killing a cat or a cat was punishable by death – according to Egyptian beliefs, such a crime led to poverty, epidemics and other troubles.

The Egyptians once even lost an important battle with the Persian army, because the enemy army used a large number of cats as human shields. The Egyptian warriors refused to fight, because they could not harm the sacred animals and incur the wrath of the goddess Bastet.

The best friends of sailors

Cats in general, and black cats in particular, remained favorite animals until the Middle Ages. Black cats were especially respected by sailors – their presence on the ship meant successful sailing, besides, the rodents had no chance to damage the ship’s tackle or food supplies. The weather was also predicted by the cat’s behavior – for example, when it sneezed – rain was expected, and when the cat diligently cleaned its fur, it meant the approach of sunny days.

A black streak in the life of a black cat

It is believed that the hatred of black cats began in the Middle Ages, and this habit quickly spread throughout much of Europe. It began to seem to people that a black cat crossing the road portends failure or even death. In addition, the entire period of the Middle Ages was marked by the fear of witchcraft and magic, and many believed that for witches and wizards, black cats were helpers in black magic rituals, and some particularly evil witches could transform into these animals.

Therefore, black cats were caught and ruthlessly destroyed, because even the leaders of the Catholic Church repeatedly called them the incarnation of Satan himself. As a result of a significant decrease in the number of cats, rodents — carriers of infectious diseases — have proliferated enormously. There is an opinion that precisely because of this, in the 14th century, Europe was covered by a terrible epidemic of plague, which took the lives, according to various estimates, from a third to 60% of the population.

The reasons for such demonization of black cats by the Christian church are actually simple – its leaders tried to destroy any inclination of people to pagan beliefs and rituals, and there are many of them associated with these animals. The ancient Slavs were no exception, who always saw a black cat in the image of a domestic spirit – the protector of the barn. He protected the threshed good – grain and straw, and had power over the element of fire.

Fortunately for black cats, superstitions about them have weakened over time. Despite this, some people continue to treat these creatures with caution and consider them a symbol of bad luck. There are also cases of cruelty, especially during the Halloween period – animal rights activists even warn the owners of black cats not to let them out into the street, because they can become victims of bloody magical rituals.

However, black cats do not hear abuse and curses directed at them everywhere. For example, the Irish and Scots have the opposite — they are a symbol of good luck. In some places, black cats are credited with helping in arranging a personal life. For example, in Japan, unmarried women usually keep a black cat at home, because they believe that it will attract a worthy man to the house. And in the British Midlands, a black cat is an ideal wedding gift that heralds a happy life for the bride.

Regarding who is the author International Black Cat Day, then there are several assumptions, and for sure it is possible to assert only the fact that this holiday was founded in the USA. According to one version, the idea belonged to an American whose sister had died. Her beloved black cat was very sad and died exactly two months after the owner’s death. Struck by the almost human longing of the animal, the man decided to establish a holiday in honor of black cats, which are capable of faithful love.

Another version claims that the holiday was invented by a Facebook group created in the USA, which was inspired by sad statistics – it turns out that black cats are put to sleep 5 times more often than cats of other colors. Therefore, the members of the group decided to draw attention to this unfair and prejudiced attitude and establish the International Black Cat Day.

Do black cats have any biological advantages due to their coloring?

Researchers from the US National Institutes of Health have found that genetic mutations responsible for the black color of cat fur provide animals with greater immune resistance to various diseases — like genes that can resist AIDS in some people.

Why do black cats sometimes change their fur color and become brown?

This happens when two factors coincide – the cat has a gene for striped ancestors and long-term exposure to the sun. Then the fur of a black animal can acquire a rusty-brown shade, because the sun’s rays destroy the dark pigment in it, and hereditary stripes become more visible.

What breeds do black cats belong to?

The Association of Cat Lovers has identified 22 breeds that have representatives with plain black fur. Among them are Persian, British Shorthair, Devon Rex, Maine Coon, Scottish Fold, Bengal, Siberian, Oriental, Turkish Angora and other breeds.

Is there a breed of cat in the world that is exclusively black in color?

So, this breed is called “Bombay”, and it was formed as a result of the crossing of two breeds – American shorthair and Burmese. Bombay cats resemble miniature leopards with coal-black fur that feels like silk and looks like glossy skin. The nose and paw pads of animals are also black.

What differences in personality and care do black cats have?

Sometimes you can hear the opinion that black cats are aggressive, but this is not true. Like other cats, they are affectionate, sociable and playful, and they respond to good treatment with kindness and gratitude. It is worth remembering that black cats tolerate heat worse, so it is advisable to purchase special cooling mats or cages with hydrogel for them.

It is very easy to celebrate this holiday if there is a black furry companion at home – it is appropriate to please him with his favorite goodies, a new toy, a joint game or another activity that brings him pleasure. On August 17, many photos of black cats appear on social networks, which are shared by loving owners, so why not join the pleasant tradition. But it should be taken into account that photographing these animals is not very easy precisely because of their black color.

The holiday of black cats is a great opportunity to read one of the literary works in which they are given enough attention – for example, the story “The Black Cat” by Edgar Poe or the famous Bulgakov novel with a bright character – the cat Behemoth. Movie lovers can entertain themselves by watching adaptations of these works.

If on this day there was a desire to get a pet, it would be logical to choose a black cat. Moreover, in temporary shelters or simply on the street among homeless animals, black cats are statistically the majority — people take them home less often than cats of other colors.

Even if it is impossible to get a cat – say, due to allergies or for other reasons, this does not mean that you should stay away on a special day. You can always find an animal shelter that needs financial help, and thus do a good deed, and maybe even improve your karma – in case black cats really do have magical powers.

This holiday is a pleasant and positive event if only because there are many fans of black cats among modern people, and the owners of these animals know for sure that their pets are the best.

Despite the fact that black cats are the true stars of numerous movies and television shows, they can truly be considered the most refined and elegant of all felines. If a black cat is healthy and eats properly, its fur is smooth, shiny and looks perfect. The pet always seems to be ready for an official reception in the style of “Black Tie”.

Some tend to compare black cats with Japanese ninja warriors, because they move with incredible grace, without any clumsy movements, and thanks to their black coloring, they are almost invisible at dusk or in the dark, and these features give the animals a mystery and a kind of magical appeal.

In addition, from a practical point of view, black cats also have advantages – when they shed, black hairs are less noticeable on clothes or carpets than, say, white or red ones. The achromatic color fits perfectly into any interior, so a “stylish” black cat, in addition to everything else, can become a real decoration of the home.

However, the main meaning International Black Cat Day is to popularize knowledge about these animals and to destroy harmful superstitions, because these faithful companions, skilled mouse catchers and simply lovely creatures deserve the best treatment from people.

When will we celebrate International Black Cat Day?? 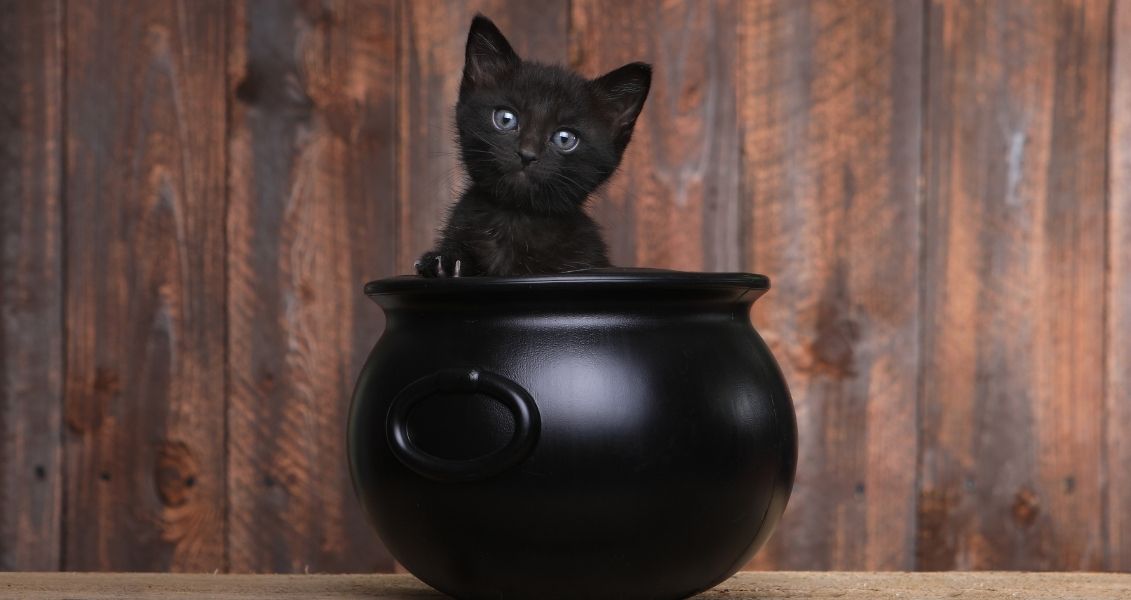