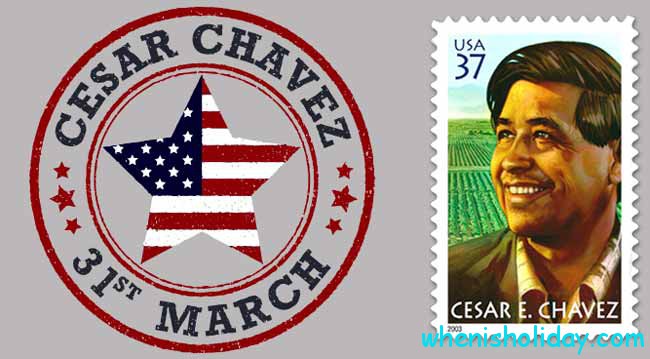 Any day of the calendar is marked by an event of great significance. A lot of occasions are dedicated to particular persons, who made the memorable contribution in the history. The last day of March, when Cesar Chavez day is in 2018, is not an exception. On this day the supporters of the so-called Zoroastrian calendar celebrate the Feast of Fire Warriors. This day is also recognized as the World Backup Day. But for some American people, this date in the calendar is also a commemoration of César Chávez, a fighter for social rights.

Many people call him the Martin Luther King Jr. of Latino civil rights, nonetheless just 8 states decided to honor the memory of him on the day of his birthday.This holiday is celebrated annually to recollect the achievements of this man, who entirely changed the life of many citizens for the better.

If you wonder when is Cesar Chavez Day 2018, you should definitely get to know about his origins.

César Chávez was a defender of simple people who worked on the farms and tried to stand upon their rights. At that period of time, such work wasn’t well-paid and working conditions were leaving much to be desired. So, it goes without saying that people started to show their resentment about this massively which resulted in boycotts and strikes and it was César Chávez who was at the forefront of this movement.

He lived out 66 years of quite uneasy life. From the very childhood, he had to face the poverty his family suffered from as a result of the enormous loss of property in the period known as Great Depression.

As growing older Cesar was realizing more and more how miserable his life was and that he definitely wouldn’t wish such pitiful future for his children. Therefore the boy took great pains in order to gain knowledge and never forgot about self-education trying to provide his own versatile development during all his life.

At the age of 25, he began his activity in the social organization to protect the civil rights of Hispanics. The aim of this young man was not only to earn money, he sincerely wanted to help people in need. That’s why he devoted all his time, energy and strengths to this work. His unprecedented loyalty bore its fruit and in several years he headed this direction.

In a while, he created an association of farm workers, who had been fighting for their rights for 5 years. César Chávez never retreated or surrendered. Several times he even arranged hunger strikes and it demonstrates his persistence and desperate craving to prove the truth by all means, even by sacrificing his own life. And it is unbelievable that after getting through such difficulties this man returned to studying since he felt some lack of knowledge.

Needless to say that this great man made a huge accomplishment inspired a great number of his followers. For many people, he was and remains a symbol of hope for better future, an idea that everything can be changed if you manage to overcome your fears, inertness and finally take actions.

Cesar Chavez was convinced that everybody should make at least the smallest contribution for the benefit of the community, because the community is the basis of the society, without its development there is no progress in the society.

So what is the date of Cesar Chavez Day 2018 and what do we know about the way of its celebration?

César Chávez Day is celebrated in many parts of the US. It was announced for the first time in California in 2000. However, its status differs from place to place: in California, it’s a national observance, but on the contrary, in Colorado and Texas it is regarded as an optional celebration. Of course, this day is honored most of all in Arizona, the place of birth and death of César Chávez.

Together with the proclamation of César Chávez Day there were made grants for students to encourage them to participate in special programs and take part in the life of communities. And it has essentially influenced the system of US education. As a result in 2002, there were created specific 64 learning projects, giving possibilities to students and making the process of getting an education more available.

In 2003, on the third year of celebration of this holiday million of California citizens got together from all corners of the state to honor of César’s memory. 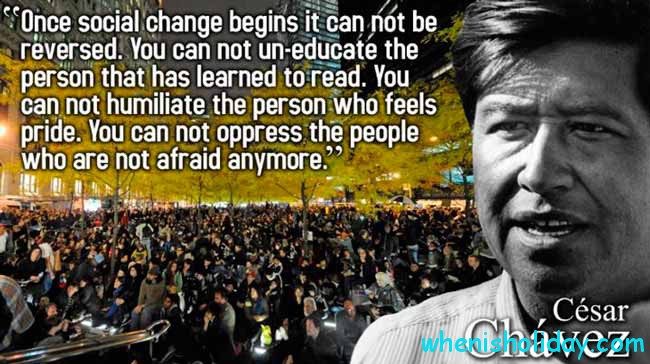 We should know, what a day Cesar Chavez Day would be in 2018. This holiday is never held without powerful speeches, presented by communities and governments to remind the merits and achievements of César Chávez not only as an activist but as a well-educated, selfless, benevolent philanthropist and reveal the significant role of this man for the today’s existence of the Americans.

On this day the mass media attention is concentrated on the problems, raised by César Chávez since these issues also refer to people nowadays and they try to compare the today’s position with the situation of those days and make some conclusions concerning further development of the American agriculture.

Guided by César Chávez heritage people are becoming more and more engaged in activities, giving others the opportunity to learn something and improve their environment, with the help of, for example, planting trees and looking after gardens.

Schools of the US also get ready for this event. Children are made an excursus into the life and activity of César Chávez, they take part in classroom competitions, quizzes, projects, intellectual games and historical quests dedicated to his famous quotes, personality, and achievements.

So when is Cesar Chavez Day in 2018, calendar and what to expect from it?

In 2018 this holiday will be as usually celebrated on 31st of March. Speaking about the day of the week, it will be Friday, so there will be plenty of time to observe all the activities, which are planning to be performed for this occasion.

So, we see his life is a specimen of “great people are made of the small ones” scenario. Anyone of us is able to achieve what we long for. Have many examples among artistic, historical and scientific figures became the icons and gained the world’s recognition just having their talent and a great wish to get something better. This proves once again that nothing is impossible and that you can achieve your goal, in any case, the only thing you need is your desire to go and never give up.

🥃 When is National Whiskey Sour Day 2022

😱 When is National Bullying Prevention Day 2021