Holy Patrick — a Christian bishop and missionary, but he is best known as the patron saint of Ireland. There are many legends about this saint – it is believed that he brought Christianity to Ireland and rid the country of snakes. At first, the memory of St. Patrick was commemorated purely in a religious context, but later the celebration also turned into a secular event with cultural and commercial significance. St. Patrick’s Day is celebrated on March 17, and on this day everyone can feel Irish – if not by birth, then by spirit. The saint is honored not only in Ireland, but also in many other countries, especially where there is an Irish diaspora.

How did the idea of ​​celebrating St. Patrick’s Day come about?

St. Patrick is often called the world’s most famous Irishman, but he was actually born in Britain, around 385, in what is now Wales, then a Roman colony.

Patrick’s family was wealthy, his father served as a local deacon, and his mother was the niece of the bishop of the Gallic city of Tours, Martin of Tours. Despite this, the boy was brought up without particular religiosity, and was not overburdened with studies.

In those days, Britain suffered from attacks by the Irish, who engaged in piracy at sea and robberies on land. During one such attack, 16-year-old Patrick was captured and sold into slavery in Ireland.

The boy was forced to herd and care for a flock of sheep. He spent six years doing this job, most of the time being in nature, away from people. Lonely and sad, Patrick was looking for some consolation and found it in faith. Previously not religious at all, he began to pray several times a day and dreamed that his Irish captors would convert to Christianity and become more merciful.

Once Patrick heard the voice of God in a dream telling him to leave Ireland on a ship waiting on the coast. The young man escaped from captivity, in a few days he walked 200 miles (more than 300 kilometers) to a seaport and actually saw a ship there ready to sail. At first the captain did not want to take the passenger without money, but in the end he looked at the fugitive. Three days later, Patrick went ashore with the confidence that he owed his freedom from slavery only to God.

The young man returned to his parents, who no longer expected to see their son alive. They were very happy and never wanted to part with him again. But once a man appeared to Patrick in a night vision with a message from the Irish. It was a plea to return to Ireland and bring the teachings of Christ to its people. Struck by the vision, Patrick decided to study to become a priest.

He went on a journey, stopping to study in monasteries, then spent several years in Gaul, studying with the famous priests – Hermann of Osser and Martin of Tours. When he received the rank of bishop in 432, he immediately decided to return to Ireland to preach Christianity. The young bishop refused his inheritance, said goodbye to his relatives and went to Ireland.

Patrick is the patron saint of Ireland

Of course, he was not the first Christian missionary in this country – at that time there were already Christians there, albeit few. However, as a preacher, Patrick had an advantage – his years in Irish captivity helped him to learn the language and beliefs of the Irish well. Therefore, he presented his teaching to people in such a way that it was more acceptable for them.

The priest combined Christian dogmas with traditional Irish beliefs. Yes, Patrick was able to explain to people the principle of the Holy Trinity using the example of a three-leaf clover, because the Irish were druids and respected everything related to nature.

He introduced bonfires at Easter, because the Irish were used to honoring their gods with fire. Patrick is also the author of the Celtic cross, in which he combined the cross itself and the ancient pagan symbol — the Sun.

In Ireland at that time, dozens of petty kings ruled and internecine wars arose quite often. Religion with a pantheon of numerous gods was looked after by Druid priests, who sometimes resorted to human sacrifices in their rites.

Patrick was especially worried about the situation of Irish slaves – their treatment was cruel. Remembering his past, the preacher tried to help them in every possible way. His merit is considered to be the creation of a more democratic legal code at that time.

The Christian mission was not easy – Patrick was threatened, several times he was brutally beaten, he was put behind bars. Despite this, the priest’s preaching methods were not brutal and straightforward. Patrick was characterized by compassion and forgiveness, and the churches and monasteries founded by him became centers of education, where people were taught literacy.

Over time, living among the Irish, Patrick discovered beautiful human traits in them – courage, generosity, trustworthiness. It is as if he himself became Irish and was able to sincerely love the people who once made him a slave. For their part, the Irish recognized St. Patrick as their friend and patron.

The missionary’s service lasted for about 30 years, and during this time he managed to convert thousands of people to Christianity. Patrick became the first Irish bishop in the city of Armagh, where he built a Catholic church and founded a theological school. Towards the end of his life, Patrick settled in County Down, where he died on March 17, 461.

The biggest parades to St. Patrick’s Day taking place in New York. The annual parade lasts 6 hours, about 100 thousand participants and more than 2 million spectators take part in it.

According to polls in the United States, 24% of people love St. Patrick’s Day, 68% simply like this holiday, 6% do not like to celebrate this day, and 2% hate it.

A survey was also conducted among Americans: how do they celebrate st patrick’s day? It turned out that: 30% of people dress in green clothes; 13% enjoy Irish cuisine; 12% do not celebrate at all; for 9%, it is an excuse to pinch those who did not wear green; 8% prefer alcoholic beverages on this day; another 8% of respondents drink only green beer; 6% participate in the parade; 5% listen to Irish music; 4% watch Irish films; 3% visit Irish pubs; 2% dance Irish dances.

In the early 1600s, this day was founded by an Irish Franciscan monk, Luke Wadding, a resident of the city of Waterford.

Did St. Patrick really banish all the snakes from Ireland?

According to legend, the saint freed the country from snakes by driving them into the sea. However, in fact, according to scientists, snakes never lived in Ireland. This story is probably an allegory, and the snakes could mean pagan druids.

Are there authentic written accounts of the life of St. Patrick?

The only reliable written evidence is the saint’s own works – the autobiographical “Confession” and the “Letter to the soldiers of King Coroticus”, in which Patrick exposes the cruel treatment of the Irish Christians by the British.

Who are leprechauns and what do they have to do with St. Patrick’s Day?

They are little magical men who can use their magical powers for both good and evil purposes. They have nothing to do with St. Patrick himself, but as heroes of Irish folklore, they have become one of the symbols of the holiday and souvenir products.

Why is the color of St. Patrick’s Day green?

At first, another color – blue – was associated with this holiday. However, from the 18th century, when Ireland began its struggle for independence, it changed to green, one of the colors of the Irish flag. In addition, Ireland is called the “emerald island” for its lush green vegetation. Green is also the color of the shamrock, another Irish national symbol.

How to celebrate St. Patrick’s Day?

The event, which was originally a religious holiday in honor of the patron saint of Ireland, eventually turned into an international festival of Irish culture. In celebration St. Patrick’s Day a large contribution was made by the Irish diaspora, especially in the United States. For a long time, this holiday was more popular among Irish immigrants than in Ireland itself.

On the morning of March 17, Irish believers go to church to honor the memory of their patron saint. After returning home, families arrange a mandatory meal of cabbage and Irish bacon.

IN St. Patrick’s Day traditional carnival-like parades are held – people dress up in green clothes with shamrocks, costumes of leprechauns, elves and fairies. Fun with jokes, beer, music and dancing became a tradition on this day.

The largest parades take place in the USA, and in the capital of Ireland, Dublin, a five-day festival is held with concerts, open-air theater productions and fireworks. Parades and celebrations on this day are common in Great Britain, Canada, Switzerland, Malta, Japan and many other countries. In Ukraine, St. Patrick’s Day is celebrated mainly in Irish pubs, which organize themed parties.

Anyone can join the celebration by wearing green, learning a few Irish words or Irish dance moves. You can listen to traditional Irish music, visit an Irish pub or have an Irish party at home.

St. Patrick not only brought Christianity to the Irish, but also helped them achieve independence many centuries later. The image of the saint casting out snakes became a symbol of the struggle of the Irish against British rule. In 1903, together with the first solemn parades in honor of St. Patrick, a patriotic movement in support of the native language and culture began in Ireland.

For Irish immigrants who suffered from discrimination in other countries, St. Patrick became a symbol of their native land, and the holiday in his honor helped them unite. On the example of this holiday, you can learn from the Irish about patriotism and the desire to preserve their national identity. In addition, St. Patrick’s Day opened to the local population the culture and traditions of the Irish people, and the joint cheerful celebration promoted friendship and mutual understanding.

All other non-Irish people like this optimistic and slightly fairy-tale holiday because it is an opportunity to learn more about Ireland, chat in a relaxed atmosphere, taste Irish beer, have fun at non-themed parties.

When will we celebrate St. Patrick’s Day? 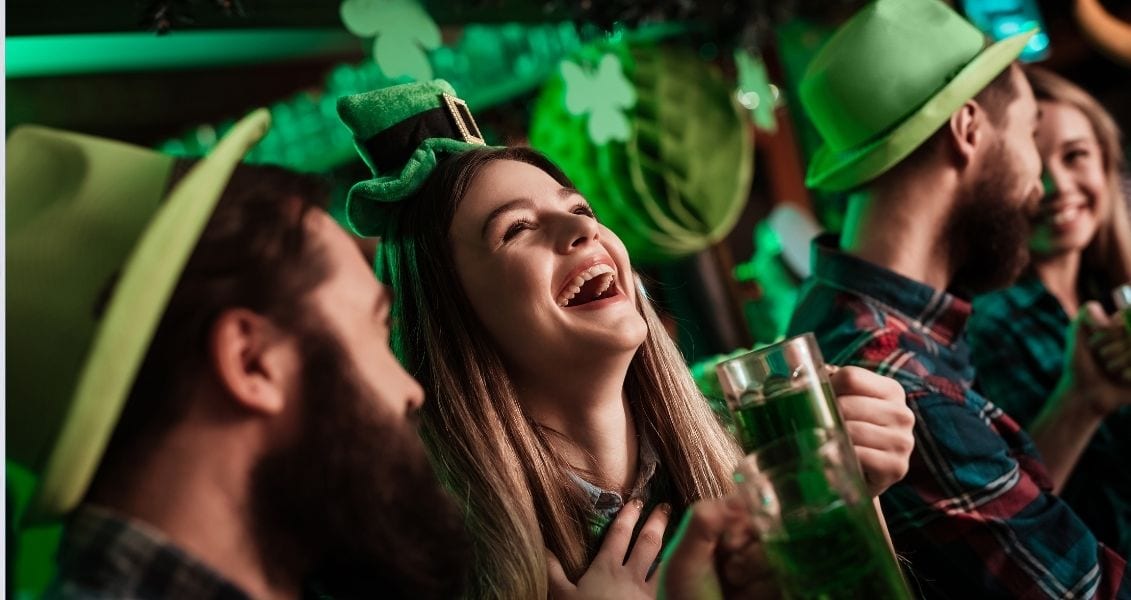