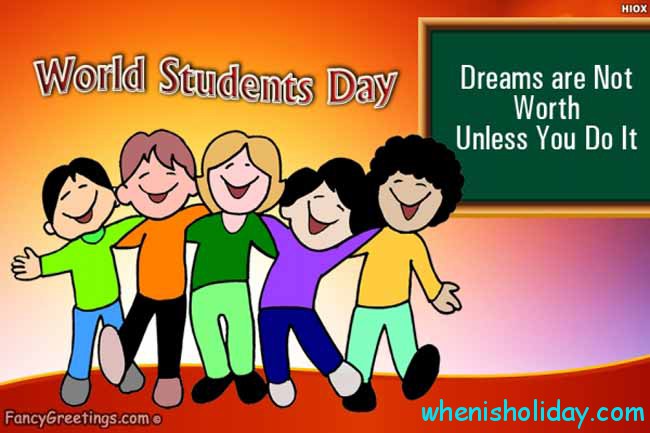 Education plays an important role in human life. We get to know the world, its mysteries, and wonders through learning. It helps people to understand many spheres of the existence better. It is true that it is never late for studying. There are even some men who study all life long, they never stop finding out something new and amazing. Students present an integral part of every society. This social group has its characteristics, specific features but one trait differs them from any others individuals, it is their eternal desire of self-improvement and creativity. If one wants to be more aware of the observance when is World Students’ Day in 2021 the further information would help us understand the meaning and the importance of learners.

Who is called a student? Are there any rules for being a good scholar? Historically, this type of learners appeared in Europe in XII century with the expansion of Latin as the main language of religion and spiritual practice. The Church needed educated citizens – not only priests. The learning was difficult and expensive at the same time. That is why it was not offered for everyone. “Spudei”, the term derived from Greek, were intelligent men who knew foreign languages, art and music, who could translate big texts, write poems, and teach others.

During the following centuries, the universities began to appear around the world, Church lost its influence of the educational process. The government of countries took initiative and offered for all willing the chance to obtain the formation of doctors, teachers, or musicians. More and more young girls and boys started their studies in big scientific centers of Germany, France, the Great Britain, Italy and Spain.

The learners were always in a good yet difficult position in the society. Their skills, thoughts, plans, and ideas cannot but surprise. Despite, they are one of the most powerful forces that can change the political and economic position in the country. Concerning the apparition of the time when is International Students’ Day in 2021, one must know it was not very easy and happy. The anniversary is rather the sad requiem for those who gave their lives, who suffered fighting and protecting the freedoms of the apprentices.

That sinister morning, November 16, 1939, Prague students and their teachers organized the demonstration in order to commemorate the anniversary of Czechoslovakia creation. That time the Prague has already been controlled by Nazi. The army broke up the meeting and they killed one of the medical students Jan Opletal. Moreover, the German Nazi arrested more than 1200 students and sent them to the concentration camp. There, nine young men were murdered the following day. Thousands of learners followed Jan Opletal’s funerals and they turned it into a second anti-Nazi protest. A few years later, in 1942, the postgraduates from all Europe gathered in London. They choose the date of November 17th as the International moment of memory, protection, and rights of every student. Since then, it is celebrated annually in every part of the world.

What does World Students Day mean for Americans? Traditionally, people distinguish two main dates of disciples in calendars – October 15th and November 17th. If you want to spend some time celebrating when is Students’ Day in 2021, two variants are possible. The difference is that on October 15th the citizens honor World Students’ Day and November 17th is the International Students’ Day. Nevertheless, the sense of both dates remains the same. They are both dedicated to the learners, they invite us to share the amazing student atmosphere.

Modern civilization purposes many goals to achieve and the first obligation is to have a good education. No matter what university you had graduated from, your education is your future career. The celebration of disciples responds to these requirements because students are the best future for all the Earth. The society calls them always young, full of energy and ideas, they are said to push the progress forward. That is the reason why we have to greet them with their professional anniversary.

This feast is intended to:

In addition to this, it is interesting to signalize what is the date of World Students’ Day in 2021. It is October 15th. This day was not chosen accidentally. The date coincides with the birth of an Indian President A. P. J. Abdul Kalam. He made a big contribution to the development of the educational system in India that is why in 2010 United Nations proclaimed the day of his birth as World Students’ Day. 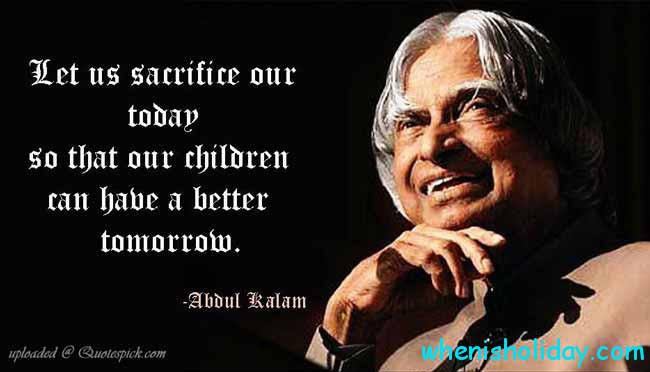 How can one define a real disciple? Through ages, there are several traits that differentiate him from other inhabitants.

Do not forget that students can even change the destiny of all country. Remember that most of the activists of the revolutions are young people.

Facts and traditions of the day out

Do not think that students are just studying all day and night long. It is totally wrong. God knows how, but they can effectively combine two opposites sides as studies and fun. What is more, every one of them perfectly knows what day World Students’ Day is in 2021 and everyone tries to take as much profit as one can. The disciples adore big parties, gatherings, meetings, conferences. They are ingenious people and they can transform the worst party to the funniest one. Spend this occasion with them, talk to them, discover the hidden world of their souls. They can teach us to be free from influence of the other people models of behavior and thinking. Be sure – on this holiday you will not be bored. Wish them luck, courage, and patience.

Let the spirit of learners live forever in our souls and minds!