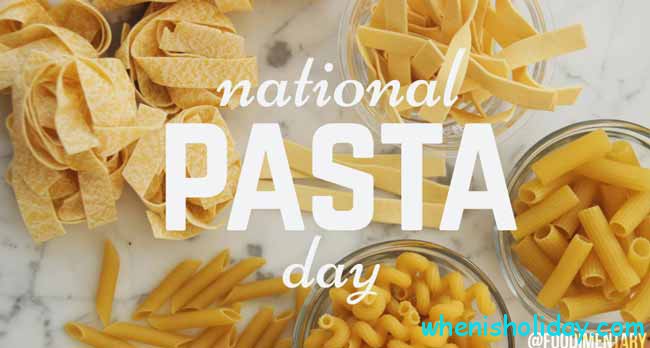 What pictures emerge in your mind when you heard the word “Italian cuisine”? Pizza, gelato, pasta… Don’t drool over your keyboard as we’re going to talk about the holiday dedicated to one of those delicacies.

When is National Pasta Day in 2022? Let’s sort it out together with the history of its origin!

The one thing that we can say for sure is that no one knows the date of the dish’s origin for certain. In fact, it is as difficult as finding out what is the day when people first started to bake bread.

According to one of the numerous legends, pasta was brought to Europe by the Venetian merchant called Marco Polo after his journey to China. However, the historians disprove the case claiming that the product dates back to the late Stone Age. That’s was the time when humanity learned to grow the grain and grind it into flour.

The very first type of the product was made of the flour combined with water and then left to dry out in the sun. Some excavations found that it was of the wide shape and called lagane. For many centuries, the thing was baked in the stove, not boiled in water.

Around the 8th century, the Arabs who invaded Europe made a huge impact on the Italian diet. The dry noodle taken to Sicily became the forefather of the modern savory food. Originally, the dish was generously flavored with the Eastern spices. The new foodstuff occurred to be so suitable for the island’s climate that was very quick to spread to the mainland.

By the 15th century, the dry got more popular due to its ability to be stored for a long time while the geographical discoveries allowed it to enter the other countries. The 18th century is an important one in the history of this savory food. Before, it was eaten with the hands and therefore was the staple of the grassroots’ diet. The upper crust couldn’t let themselves be indulged in the finger food regardless of its wonderful taste. Yet that was changed when the fork was created. Finally, they could roll up the threads on the fork and send it straight to their mouth without the dirty fingers!

The today’s rung on the gastronomic ladder of this queen of the Italian diet was occupied not so long ago, around the end of the 19th century. First, because Italy got to know the tomatoes and the dish obtained its own classic taste. Second, because Italy also got involved in the national liberation movement turning the food into its symbol. At those times, the craze over the pasta penetrated into every house.

It’s unclear what the Italians took first – that it’s yummy or that it’s popular – but anyway, the product went its way from the foodstuff for the poor to the staple of the country. A bit later, at the beginning of the 20th century, the first factories were built that decisively changed the culinary experience of the whole world.

In the late 90’s, the foodstuff producers gathered for the regular World Pasta Congress and resolved that from then on there would be the special day for this Italian food. And that’s how we came to ask – when is International Pasta Day 2022?

What does National Pasta Day mean? It means a perfect excuse to load yourself with the carbohydrates and praise the good Italians for their delicious culinary invention!

Actually, in Italy, every farinaceous foodstuff is called pasta: spaghetti, ravioli, cannelloni, lasagna, and even the North African couscous. For the last years, the term became applied to the deep fried pastry and the Middle Eastern dishes resembling the meat pastry. However, the traditional meaning is still the product made of the wheat flour and water (sometimes eggs).

The unusual sorts of the flour, used in Italy for making this joy, are the chick-pea, buckwheat, rye, barley, and emmer wheat. The secret rule has it that the term is referred to the truly Italian dishes that look like ones. That’s why the Eastern European dumplings can’t be called the proud word, together with the Asian noodle. Those last are close to the Italian goody in terms of technology, yet in terms of culture – definitely not.

Besides the heavy load of the carbs, Italian staple brings the evident benefits to our health. Thus, to increase the level of serotonin – the hormone of happiness – we need to consume more of the tryptophan rich foods. It contains in the asparagus, sun flower seeds, pineapple, bananas, spinach and the hero of our article! Therefore eating it we improve our well-being and go through the stress much easier. Regardless of what day World Pasta Day in 2022 falls on, let it be on your plate more frequently.

Still, there’s no any classification of the pasta. Yes, there’s the fresh and dry one, made of the eggs or water, big or small shape, with the stuffing or without. Nevertheless, describing the certain kind of the Italian joy and hoping that it would live in the books unchanging is wrong.

For example, one of the most popular sorts called tagliatelle is always made of the eggs. However, the number of the latter varies across the regions and depends on the sauce it’s served with. Tagliatelle could be fresh and dry, plus they might be a bit colored.

There are about six hundred of the types of that goody in the world! These are the most widespread: 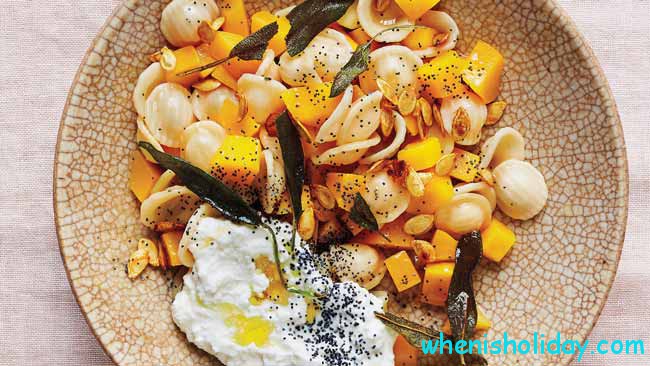 There’s nothing easier and more pleasant than celebrating this tasteful holiday. Mark it with the bowl of extraordinary good pasta dish. In our honest opinion, the best one is carbonara. You can find the recipe on the Internet.

Another appropriate option will be the pasta party! Invite all of your friends, colleagues, and relatives, and ask them to bring the theme dish they’ve never made yet. As for yourself, try to amaze them with something mind-blowing. For example, the sweet salad with some maccheroni!

Make a firm fixture in your calendar, when is Pasta Day in 2022, sort it out which type of the Italian culinary queen you like more and go for it!

When is National Pig In A Blanket Day 2020