WhenIsHoliday.com
Home Asia 🕌 When is Ashura 2022 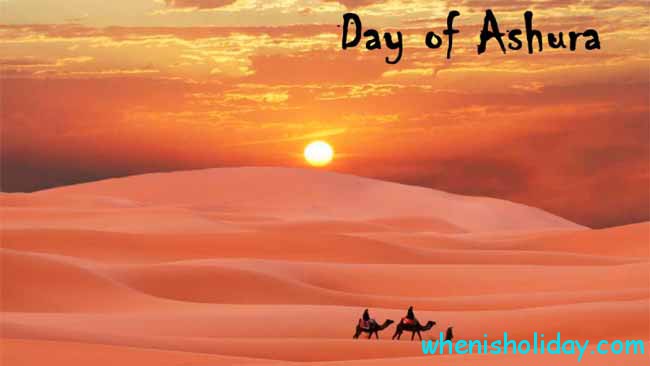 Ashura is a day in a period of Muharram. It’s recognized as a festive day. Muslims celebrate the day with great joy. The holiday is celebrated in various ways. The most accepted ways of celebrating the day concern exchanging nut fruits and pastry. Children play with fire (Sh’ala) and toys in the streets. The holiday carries a folk tradition in itself. When is Ashura in 2022?

The origins of the festival

Shi’a Muslims commemorate the date of Hussein’s death in a battle in Karbala. The holiday’s history is closely connected with Muhammad’s grandson, Hussein ibn Ali. He was born in 620 AD. His deeds were famous for providing piece, honour and love. When Muhammad died, the country plunged into the atmosphere of corruption and turmoil. The chaos was provoked by a new caliph Yazid. His governance led people to destruction of the moral principles of people.

Yazid demanded Hussein to worship him as a new leader, to admit the right of his rule. Hussein understood the harm of such ruling and didn’t want to accept his authority. Despite of all risks, the man rejected to come to Yazid.

Hussein decided to raise a revolt against the new governor. He left his native city and went to the east to a new territory. Nowadays that land belongs to Iraq. At first there weren’t lots of people, just Hussein’s family and almost 80 other people. They tried to serve piece despite their readiness to fight for independence and their belief.

Yazid got the news about Hussein’s actions and decided to block people’s movement with the military irruption. His aim was to get Hussein’s allegiance. The governor gathered the army of 30 thousand warriors to fight with Hussein. Ashura is considered the day when the battle started. It was the 10th day of Muharram. When is Ashura 2022? Ashura 2022 will begin in the evening on August 28th and ends in the evening on August 29.

The event took place in Karbala, the dessert in Iraq. Hussein’s people were denied to get water for a period of 3 days. Nevertheless the worshippers didn’t give up and prayed. They knew that they would be physically defeated, but their souls wouldn’t be soiled. Women and children were taken as slaves to Syria.

The Yazid’s army started its incursion at noon. Hussein’s people tried to defend their camp but they couldn’t. All of them died. Hussein was beheaded. The result of the battle was some plots across the country. People wanted to resist the tyranny of Yazid. Hussein’s relatives made sermons in which they defied the tyranny of Yazid. They told people about the horror of the battle in Karbala. Hussein became a symbol of a resistant struggle for humanity.

The meaning of the date is very controversial. Shi’a Muslims think about Hussein while Sunny Muslims commemorate the date when Moses went away from the tyranny of Pharaoh. The day is remarkable because of Moses’ crossing the Red Sea. The Prophet Muhammad told people to mark the day with fasting. What is the date of Ashura 2022?

Facts of the day

The most significant facts can be separated out from the whole history of the day: 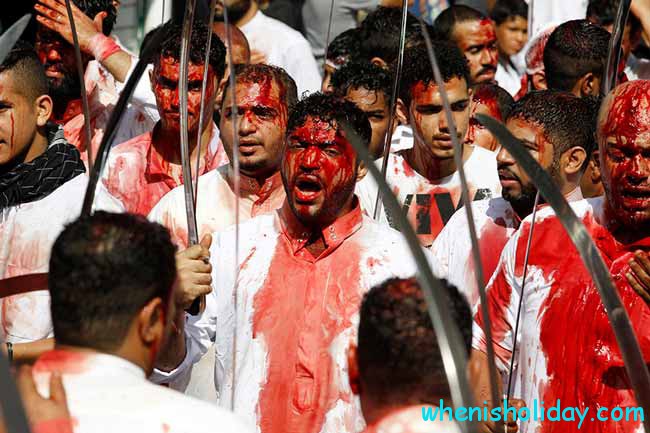 If a visitor wants to watch the traditions of Muslims, he can study the schedule of events in mosques. He can write the question in the internet “When is Ashura in 2022, calendar of events”.

How to observe the date

Some people name the day as Ashura but in Morocco the name “Zamzam” is used. People observe the day with spraying water on each other and passers-by. The tradition is named as “a water battle”. People don’t want to be wet, they can find volunteers who can get all amount of water on himself. After that worshippers have a special meal “Moroccan couscous”. This dish consists of meat which is dried on Eid al-Adha.

The visitors can watch various customs during the journey across the Muslim countries. People can watch processions in the cities in live or on TV. In Pakistan cities the processions are held with a great number of participants. Islamabad holds the most numerous processions. The visitor must be ready to watch blood. The worshippers take swords, knives and chains to flagellate themselves.

The guests of the Muslim cities may visit significant places, historical sites, sacred tombs and remains of ancient temples and cities. Museums have lots of exhibitions devoted to the Muslim religion.

Ashura is a national holiday when the citizens have a day-off. It’s a national observance. The educational and governmental establishments, offices and banks are closed. Muslim shops and departments may have reduced schedule or may be closed at all. Visitors of the Muslim countries should check the timetable of transport companies not to miss main events of Ashura. People are to ask a question “What day Ashura in 2022 and what interesting events are to be held?” beforehand.