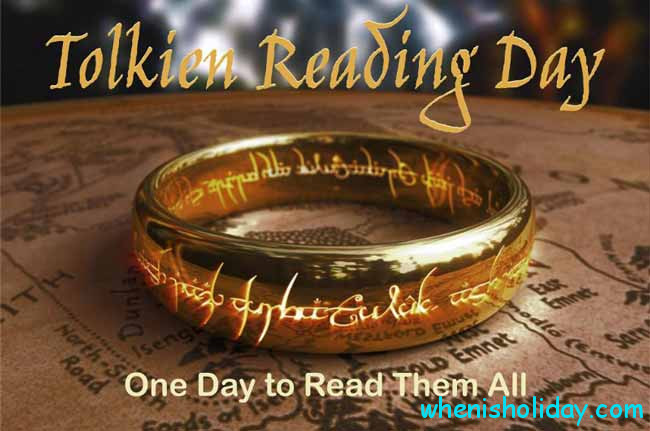 When is National Tolkien Reading Day in 2020? – This is the question, the answer to which can be given only by people, who are considered to be the representatives of some definite societies. However, we are sure that it is not much for such a great writer that is why we have decided to investigate this special occasion in details and to tell about it to public.

Certainly, such matter as what day Tolkien Reading Day in 2020 is needs a lot of explanations and clarifications. We understand it quite well, and usually the directions, like historical background, are of great demand among our followers.

The date of March 25th was chosen not occasionally. The explanation is that this day the downfall of the famous “The Lord of the Rings” (“Sauron” part) happened as well as the fall of Barad-dûr. So as you can see it is quite easy in fact.

By the way, not everybody knows, that being fervently loving the language and the nature of England, Tolkien believed that the English were offended by a lack of mythology comparable in some ways to neighboring people: “From the youngest years, the misery of my beloved homeland has grieved me, it does not have its own traditions (associated with its language and soil) in any case, the quality that I was looking for and found (as a component part) in the legends of other lands. There is an epic Greek and Celtic, Romance, Germanic, Scandinavian and Finnish (the latter made a strong impression on me); but nothing at all about English, except for cheap editions of folk tales.”

The secret of the special reality of the world of the “Hobbit” and “Lord of the Rings” is that the reader clearly feels: the piece that is given to him is part of a much larger whole, about which he is told half-hint or not at all. As Lewis wrote in the review of the first edition of The Hobbit, “Professor Tolkien obviously knows more about his creations than is necessary for this tale.”

What does Tolkien Reading Day mean? – Frankly speaking, we are not sure that we can answer this question instead of you. Why? – The matter is that we don’t know your attitude to this author as well as to his masterpieces. You see, there are some people, who have never read these books. We are almost sure that they haven’t watched the films either.

By the way, that there were readers, who demanded the continuation of the story, so Tolkien took up the “Lord of the Rings”. And immediately after the publication of the three-volume epic, the world fame came to the author.

The book was read by everybody: children, academicians, hippies, and housewives, but it gained the most popularity in the student environment. In the 60s of the last century a real cult of the professor and Tolkienistics arose, and among the American students there were slogans: “Gandalf to the Presidency!” And “We’re leaving for Middle-earth!”.

Discovering the question “When is International Tolkien Reading Day 2020?” we would like to demonstrate our readers something really amazing about this author as well as about his absolute masterpieces.

Under these conditions, we can’t but mention the following facts. “The Lord of the Rings” is a saga, which is recognized as one of the greatest books of the 20th century. Its publishing has been continuing even now. The same thing concerns the translations, where Tolkien confidently holds the first positions in the rate. By his powerful impact, this person has definitely changed the contemporary culture as well as literature in general.

Many people are sure that Tolkien’s books made the formerly marginal genre of fantasy that is the most popular one nowadays. He also aroused unflagging interest in the romance of battles and wanderings, a fairy tale and the early Middle Ages.

The specialists even note that this man has forced several generations of readers to fight with swords and to be called fictitious names. And this boom is not going to decline.

The screen version of the novel, which was something like the product of the strange intellectual game of the Oxford professor, half a century after publication, is one of the most successful in the history of cinematography. The Tolkien’s son Christopher regularly publishes all new materials from his father’s inexhaustible archive: in June 2017, a hundred years after the creation of the first version of “The Song of Beren and Luthien,” it was first published in a separate edition.

And in November of the same year, Amazon announced the purchase of rights to shoot the series on “The Lord of the Rings.” One of the reasons for the popularity of Tolkien’s books is their very special reality.

When is Tolkien Reading Day in 2020, calendar will surely remind you. In addition this is not difficult to memorize it for a long time. It is celebrated on March 25th annually. And knowing this, you can join any moment you want or would like to.

As we have already mentioned above, the special occasion has a fixed date, but as a rule, all the events, devoted to it, are realized at the weekend, which it prior to it. It is done to the fans’ convenience.

As to this event there are so many traditions. Some of them are considered to official, others – vice versa, non-official. If you want to participate in the first ones, just find the same supporters in your town. Various lectures can be attended in libraries and various public houses. 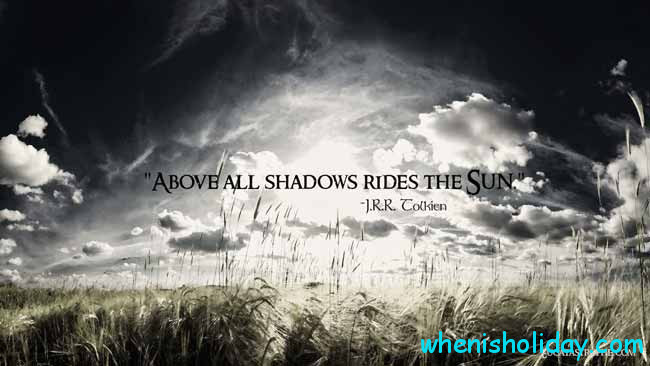 However, you can always organize something special for yourself. – For example, you may read the favorite episodes from the book. If you prefer the movies more, watch them, of course, on March 25th. You can even have a party devoted to this holiday. Cook something special and don’t forget about cacao or hot chocolate!

Investigating the question “What is the date of Tolkien Reading Day in 2020?” we found out that the masterpieces of this famous person were written not occasionally, and that is why we would like to share these facts. At the same time we can’t but mention that almost all the works were written at the period when the talented man experienced not easy, but rather saturated moments of his life.

Immediately after the war, Tolkien and his family moved to Oxford, where he began working on the compilation of the General Dictionary of the New English. Later he said that over two years of work on the dictionary he had learned more than for any other similar period in his life. Soon after that Tolkien was confirmed in the title of professor. In addition in 1925 the man was given the chair at Oxford University, he was dealing with the Anglo-Saxon language.

During the day Tolkien was engaged in scientific activity, and in the evenings he told tales to his four children. Later those fictions were turned into the story “The Hobbit”. One day the professor’s manuscript fell into the hands of his student. She, having read and admired the marvelous history, decided to send the book to a familiar publishing house. It is amazing to admit that at first publishers suggested that the “Hobbit” would arouse greater interest among children from five to ten years old, but the audience of readers was much wider, and already in 1938 the work of the professor received the prestigious prize of The New York Times as the best children’s book of the year.

🍧 When is National Strawberry Sundae Day 2022