WhenIsHoliday.com
Home America 👖 When is No Pants Day 2022

It’s not odd that people love having fun and relaxing, so there are lots of strange holidays and customs which don’t relate to religious or national traditions. They’re made by people and for people and don’t require special celebrations. One of such days is No Pants Day. It’s celebrated across the world by people of different ages. There’s a co-existence of two similar holidays, No-Pants Day and No Pants Subway Ride Day. When is No Pants Day in 2022?

The first mention about No pants Day occurred in the middle 1980s. There’s a thought that the first founder of the day was the Knighthood of BUH, an organization in Texas. It’s held in May when it’s rather warm.

No Pants Subway Ride Day was thought up by a humorous organization, Improv Everywhere. The organizers set the date of the day every year. 2002 was the first year when seven New-Yorkers decided to make a joke and to have a ride in the metro without pants. The event was so obscure and strange that people from all over the world couldn’t stay indifferent. The next year the amount of people rose. It became a global event. Nowadays there are many thousand people who take part in No Pants Day in many countries. They leave their pants at home and have a metro ride.

The majority of people doesn’t understand the aims of the event and doesn’t accept the actions of No Pants Day’s participants as a usual thing. Sometimes it’s very embarrassing, especially for watchers. They don’t feel normal when people without pants enter the metro.

The first aim was to make people laugh and relax. The organizers admit that there’s no need to look for a deep meaning. It’s just a simple joke. Charlie Todd admitted that the first participants wanted to drown the people’s everyday mood, to make them carefree for a moment. If you want to become a spectator or a participator of the event, you should ask the internet community “What day No Pants Day in 2022?”

It’s said that the first No Pants Day was not very popular. Some people took off their pants and went outside. No Pants Subway Day also wasn’t popular at first. The participants tried not to make a group come-in. They decided to elongate the joke, so people without pants came into the train separately. The people didn’t show their acquaintance of each other and pretended they forgot to put on their pants. After the short ride a man came into the train. He proposed pants for $1.

During the following years the amount of holidays’ follower rose. People over the world decided to join annual participations. No Pants Subway Day was celebrated in many countries six years later. In 2008 the Improv Everywhere gathered the communities of Washington, D.C., Chicago, Salt Lake City, Baltimore, Australian Adelaide, Boston, San Francisco, Portland. The local citizens chose a date and made a real spectacle.

The next years the attention to the occasions spread among thousands of people, especially youth, and scores of cities. More than sixty international cities took part in No Pants Day in 2013 reaching Chinese territory. If you want to take part in the occasion, you should get the information from the organizers “When is International No Pants Day in 2022, calendar of events”.

Participating in the occasion

No Pants Day always takes place in May, on the 1st of Friday. There’re several opposite arguments concerning the way of clothing on the day. Followers of the traditional way of celebrating admit that the real spirit can be reached only by taking pants away. Other people advice to wear skirts and dresses not pants. The aim is just to feel the wind.

No Pants Day is very interesting for society, so media attention is provided. People get results of the day in the internet and on TV. More and more people celebrate the date across the world. The goal is to amuse people. The day isn’t to be taken seriously. There’re crowds of participants who walk in the streets without pants.

The organizers of the occasion in different countries join other events to the day. People made a protest at the Capitol. The occasion took place in 2007. They made a rally. They chose a place of it, the University of Texas. 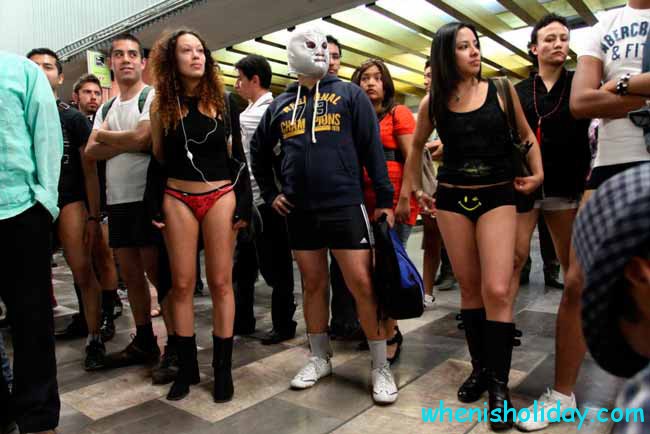 In Canada participants try to make a picnic and a croquet contest. They participate in the events having no pants. Chilliwack’s authorities make a musical show. Musicians and attendees don’t have pants. People can get information about the events’ schedule by asking the organizers “When is National No Pants Day 2022?”. The day is set on the 1st of May.

How to involve the occasion in a subway

There’s no difficulty in participating in No Pants Subway Day. The organizers invite all people, who want to have a joke, to participate in the funny tradition. The demand is to wear underwear. People are to wait for a train, come into it and have a pantsless ride.

People are prohibited to explain the surrounding people the reasons of such a prank. It’s a need to behave as usual, as if they always go outside without paths. In 2022 more than thirty cities take part in No Pants Subway Day.

Improv Everywhere provides the day on the 8th of January, on Sunday. The start is at 3 p.m. people need to wear occasional clothes, such as gloves, hat and jacket and other things. The participants must have a bag and a metrocard. There’s no need to go outside without pants. People are to take them off at the Subway entrance. The pants are to be put into begs.

The organizers of the event in America elicit several meeting points which have their routes. People, who participate in meetings, get their own obligatory routes which must be followed. Groups get trains and pretend as if they are strangers and don’t know each other. The details of the occasion can be found in the internet. Just write “When is No Pants Day 2022?”.

When is National Auctioneers Day 2020