You’ll find that little store on the corner all across the world. The US, Canada, half of Europe, Japan, Thailand… The red and orange seven against the striped background is a rosy sign familiar to every traveler who got stuck inthe middle of nowhere without water or cigarettes. Yep, we’re talking about the good old 7-Eleven and the holiday it is related to.

When is National Slurpee Day in 2022? Let’sfinditout!

Well, the company itself began operating in the 20’s, about ninety years ago, in Texas. The one who started the whole thing was an ordinary man that sold the milk and eggs from the storehouse. Because he also worked at the company involved in the ice production, the foodstuff in this improvised shop was preserved well due to the icy cold conditions. There were many others stores in the neighborhood but somehow just his very place was noticed by the customers. A bit later, the ice factory was bought by the business-like fellow who pushed the further growth of the convenience store conception. 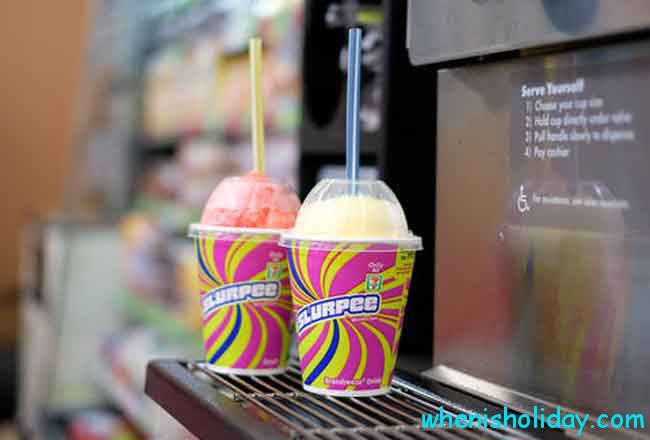 The modern name – 7-Eleven – was first used at the end of the 40’s and in six years the company celebrated the opening of its hundredth branch! Later on, the experiment carried out again in Texas, entailed the lion’s share of the places being turned into the twenty-four-hours stores. However, it wasn’t always that easy – in the 80’s, the company found itself on the verge of the bankruptcy because of the huge financial difficulties. Fortunately, the helping hand was lent by the Japanese chain of the supermarkets that bought the controlling block of shares. Due to that act, the 7-Eleven has flourished on since then.

The chain is known not only for the presence in eighteen biggest countries in the world and availability of the essential foodstuff in each of its stores but also for its own trade names such as the Big Gulp and Slurpee. This one – the slushy Slurpee – dates back to the end of the 50’s. The fruity drink was invented by an absolute chance as the man who owned the device that dispensed the soda water was caught in troubles when the thing broke down. There was nothing else to do but to send the beverages to the refrigerator in order to keep them cold. The result was rather an unexpected one – when taking them out of the fridge, the man found that the liquids become a bit slushy. Nevertheless, the buyers were delighted with the new experience of sipping the frozen soda. You guess which kind of idea entered the head of the man?

In a while, the production was set with its own name and logotype (by the way, it has been used up to these days).  When the number of the machines was a way past one hundred, all of them providing the delicious drinks in the various points of sales, the 7-Eleven decided to lay its hands on the invention. The chain entered into an agreement with the manufacturer of the beverage and negotiated the certain conditions under which the drink would be sold only in the 7-Eleven’s places.

That’s how the Slurpee (the advertising manager of the chain thought up the name after the agreement) came into our lives, so icy and sweet. When is International Slurpee Day 2022? Well, the answer is the kind of surface thing. By the way, it will be the sixteenth anniversary of the holiday!

What does National Slurpee Day mean? It means the delectable experience of swimming in the liters of the sugary drink as the date itself tells so. Of course, we do not mean swimming literally but who knows?

The Slurpee is the thing that would save you in any time of the day. Imagine that you’re riding the bus on your way to the important interview. Two longest weeks of the preparations and you’re shaking in your shoes as you definitely need to get that job. But alas the bus suddenly has a flat tire and you get off and go like an arrow from the bow to the nearest subway station. Hello, the rush-hour. Everyone is in a hurry and working with their elbows like a true boxer. Someone stepped on your foot making the shoes all mucky; the other drove you into the corner and did their best to squeeze the soul out of your body. The well-ironed suit lost its gloss, the hair is tousled and the mood is somewhere below zero onthe imaginary mood’s scale.

You’re looking at the clocks and see that there is actually nowhere else to be in a hurry to as you’re already an hour late. You wouldn’t want to be in that situation, would you? Alas, but the moment when you’re sinking in the troubles occurs to everyone. And if the level of the cortisol (the hormone of stress) is going beyond the limits, you want only to crush and cry, hide and sob or go straight into the hibernation for the next couple of days. The decision is simple – against the cortisol, you need the dopamine! And one of the sources within reach is something pleasant to your taste buds.

The cup of the favorite icy treat would certainly cool the heat. So, regardless of what day World Slurpee Day in 2022 falls on, remember that it is perfect even for the everyday use as it is a pure hormone of happiness!

You must have heard that the seven/eleven chain consists of the small stores located in the walking distance from the neighborhoods and at the gas stations. But do you know that there are eighteen countries that the shops are present in, more than thirty-six points of sales all over the world and the status of one of the biggest franchisees on the planet? 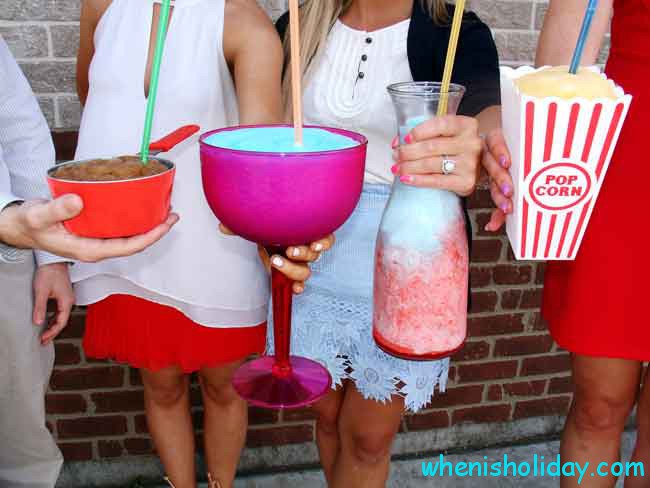 Originally, the stores’ operating hours were from 7 am to 11 pm, that’s where the name of the company came from. As we’ve already mentioned, it was also one of the first convenience stores’ companies that moved to the twenty-four-hours functioning. Rather a clever step as it is really comfortable to drop by the place on the late evening and stock up on the foodstuff.

Japan and the other Asian countries have a special soft spot for the stores as the red and orange seven with the stripy background is seen at every turn and corner. In fact, you can buy the most usual products in there, together with the manufactured goods, sim cards, and the many other items. On top of that, you can always find the coffee and the fresh buns in the store. Interestingly, every country introduces its own eating habits to the set of the pick-me-up goods: in the US, it is the hot dogs and fast-food, in China – the hot soups.

But everywhere, regardless of the diets and the like, the Slurpee is the welcome thing on the counter. What is the date of National Slurpee Day 2022? It happens on July 11!

In honor of the holiday, the company holds a promo campaign. You can drop by the nearest 7-Eleven’s place and catch the free cup of the Slurpee! Yes, absolutely free of charge. And who said that you can’t visit the store that is located three blocks away?

Remember that the campaign starts at 11 am and goes on till 7 pm so don’t oversleep you celebratory drink!

Make a firm fixture in your calendar, when is Slurpee Day in 2022, and make sure you raise your dopamine level up to the sky on that day. The Slurpee will help! 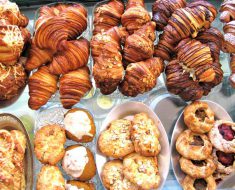