Nature is the basis of our life, but in recent decades humanity is destroying it at too fast a pace – the use of energy resources is increasing, water and soil are being polluted, and the content of greenhouse gases in the atmosphere is increasing. All this leads to global climate changes on the planet, and the process can be stopped only if the attitude towards the environment changes. Earth Hour takes place every year on the last Saturday of March, in 2022 – March 26. In the evening, everyone who cares turns off the lights for one hour, but in reality the event goes far beyond this symbolic action.

How did the idea of ​​celebrating Earth Hour come about?

Humanity is a small part of the number of all life forms on Earth, but despite this, it has the greatest impact on the natural environment. Unfortunately, this impact is not yet positive, but rather destructive – and most of the dramatic changes have occurred in the last 50 years or so.

Due to rapid population growth and at the same time low environmental culture, pollution and destruction of natural ecosystems is increasing. Many species of animals and plants are already considered extinct forever, and a third of natural minerals have been used by mankind. Today, the level of carbon dioxide in the Earth’s atmosphere is significantly higher than it was 50 years ago. The reason was the intensive burning of oil, gas and coal, as well as changes in land use, such as continuous deforestation. As a result, we have global warming and dangerous climate change.

According to NASA’s Institute for Space Research, the Earth’s average temperature has risen by 1.2°C since 1880, and two-thirds of that increase has occurred since 1975. For several years in a row, record summer heat has been recorded in Europe and on other continents.

The study of the Arctic and Antarctic, conducted by NASA since 1978, shows a sharp decrease in the total ice mass at the Earth’s poles. The rate at which glaciers are melting is causing sea levels to rise by 3.1 mm every year since 1993. In 2018, a giant block of ice weighing 10 million tons broke off from the Helheim glacier in Greenland and fell into the sea. This case is recorded as a record, but numerous smaller glaciers are constantly melting without attracting our attention.

Another threat to ecosystems is chemical pollution. Since the second half of the last century, about 140,000 chemical substances, such as plastic or pesticides, have been synthesized. Each year, 10 million tons of these toxic substances enter the environment, polluting water and soil, and the world has faced difficulties in accessing clean fresh water in many regions.

Consequences of human activity on Earth is already clearly visible in space images taken from a satellite. For example, it is noticeable how the Great Barrier Reef is gradually collapsing due to coral discoloration from high water temperatures; the area of ​​the Dead Sea and the Aral Sea is decreasing due to drying.

The biodiversity of our planet is also suffering numerous losses. Research by the World Wildlife Fund indicates that humans have destroyed 60% of nature over the past half century. In particular, 20% of the forests of the Amazon basin have been cut down, 30% of sea corals have disappeared, and the population of freshwater fauna has decreased by 75%.

Such a state of affairs could not but alarm international nature protection organizations, in particular, the World Wildlife Fund. When the hard facts of climate change were made public, the Australian branch of this organization began to look for a way to bring the issue to the attention of the general public. To create a successful global event, the idea of ​​reducing electricity consumption was chosen, that is, the voluntary shutdown of lighting sources on a certain day of the year for one hour. They decided to name this hour Earth Hour.

Soon the team was formed, the strategy and concept of the event was developed. As a test Earth Hour decided to hold it in Sydney, Australia, as the city authorities were one of the first to support the new initiative. So in 2007, on the last Saturday of March, the city turned off the lighting of outdoor advertising and other non-essential light sources for one hour. About 2,000 enterprises joined the action, and people turned off electric lamps at home. It turned out that without them you can communicate, do physical exercises, walk the streets and do many other things. There was even one candlelit wedding in Sydney that evening.

Participation of citizens in the first Earth Hour was expected at the level of 20-30 thousand, but more than 2 million people took part in the event, that is, 56% of Sydney residents. One of the reasons for such success is considered to be the ease of joining the campaign and the ability to independently control its progress at home. In 2008, Earth Hour became a global event — it covered all continents, more than 370 cities and 18 time zones.

Currently in Earth Hour 190 countries participate annually, and this action has become the largest environmental movement in the world. Every year, more and more people and businesses join the event, symbolically casting their vote for increased energy efficiency and smart consumption of resources.

Why does Earth Hour take place on the last Saturday of March?

What does the Earth Hour logo mean?

The logo of this event depicts the number 60 — that is, 60 minutes dedicated to environmental issues. Since 2011, a + sign has been added to the number 60, which means going beyond one hour and joining other environmental actions.

How safe is it to turn off the lights in cities?

Turning off the lights at this hour is not dangerous, because Earth Hour refers to turning off only secondary sources of light, not those that affect safety, for example, on roads or in public places.

What will happen to the voltage in the power grids if everyone turns on the lights at the same time after Earth Hour?

Despite the defined time limits, people celebrate this event individually, and not everyone turns on the lights at exactly 9:30 p.m. Therefore, sharp voltage drops in connection with Earth Hour during all the years it was held, it was not observed.

Are there specific results recorded from the hourly blackout?

The organizers of the action never measured the amount of electricity saved or the level of carbon emissions after it. It is a measure of a somewhat symbolic nature to make everyone aware of their responsibility and to intensify actions for nature conservation. 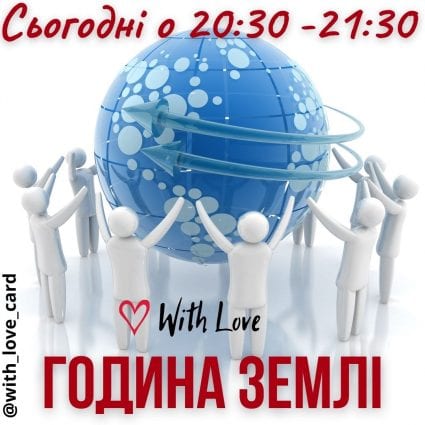 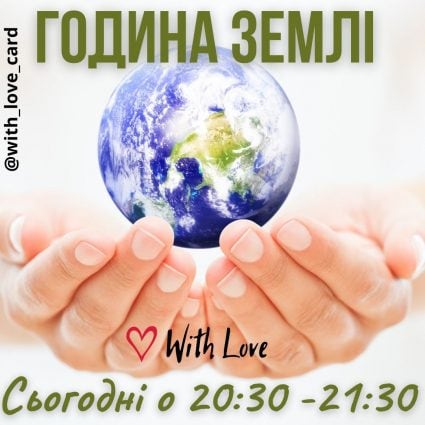 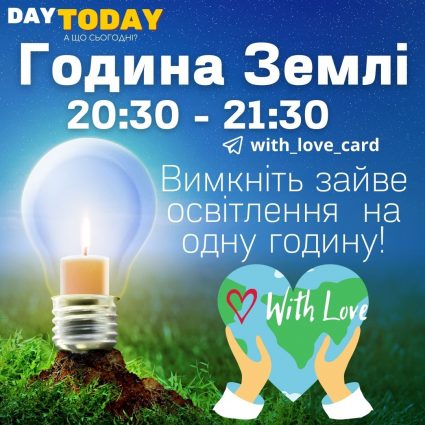 How to celebrate Earth Hour?

In order to celebrate this event together with the whole world, on March 26, 2022, at half past eight in the evening, for one hour, you should completely or partially turn off the electric lighting and electrical appliances in your home.

But since this action is more a symbol of unity with progressive humanity than a practical measure, you should start changing your daily habits in the matter of energy saving — for example, use energy-saving lamps, do not forget to turn off electrical appliances on time, think about insulating the house.

In our country, not everyone knows about its existence yet Earth hours, so it is worth sharing information about this event on social networks. Then turning off the lights will not be an unpleasant surprise for people, but on the contrary, it will encourage them to join the worldwide action.

To spend an hour without electric lighting pleasantly and with benefit, you can arrange a cozy candlelit family dinner, watch the starry sky, calmly talk with loved ones, go for an evening walk, do physical exercises or meditate. By the way, it is meditation that is recommended this year as an activity for Earth hours World Wildlife Fund. A moment of solitude will allow you to calm your mind and feel gratitude for our planet, which provides us with everything necessary for life.

On this day, it will not be superfluous to confirm your commitment to the preservation of nature on the Voice for the Planet international platform. So far, more than half a million people from all over the world have joined the campaign, casting their vote for caring for the planet and its resources.

Purpose of the event Earth hours — make governments, business owners and ordinary people aware of their “ecological footprint” and take responsibility for it. The World Wildlife Fund also uses Earth Hour to promote legislative initiatives and support its other projects, such as the development of renewable energy.

Earth Hour allows you to feel solidarity with people in all parts of the globe and reminds you of the affordable methods of smart consumption, thanks to which each of us can reduce the negative factors that lead to global climate change. This event provides a lot of information and concrete facts about the current state of the environment, and traditionally serves as a platform for broad discussions on the protection of nature.

Also, success Earth hours contributes to numerous environmental initiatives with the help of crowdfunding, or collective financing. For example, half a million trees were planted in Uganda to combat deforestation, in Argentina a law was adopted to protect 3 million hectares of the sea coast, in Thailand special educational programs were implemented for schoolchildren, and in India street lighting from solar was installed in three settlements without electricity batteries

Ago Earth Hour is an important step towards positive changes in people’s understanding of environmental problems, and therefore towards the prospect of successfully overcoming them.

When will we celebrate Earth hour? 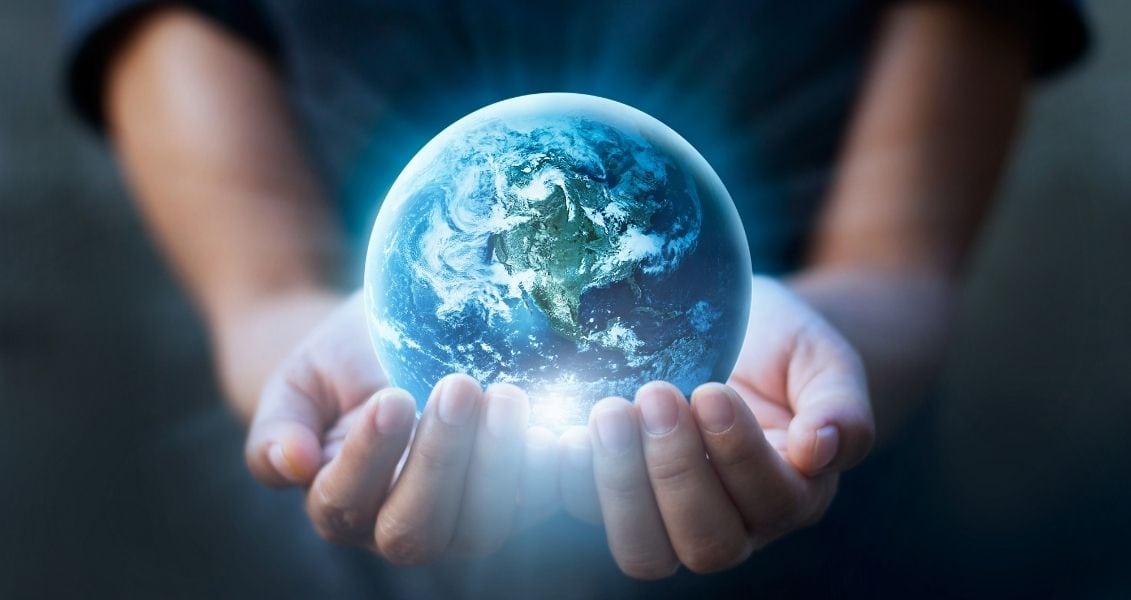 International Day of Struggle for the Total Elimination of Nuclear Weapons

A day without a beard