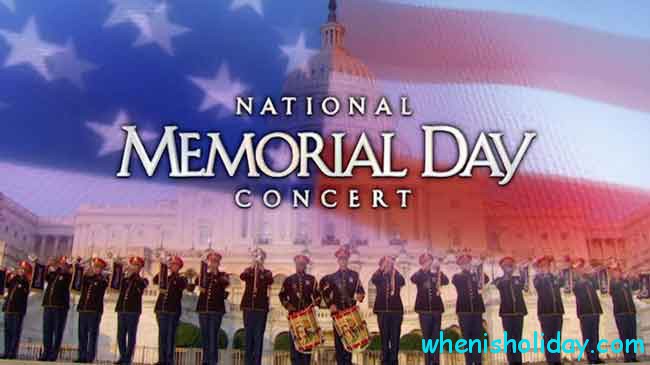 Some things must be remembered forever. The ones that taught the world the valuable lessons through the horrible sacrifices. Our planet witnessed so many fights, so many people fallen before we understood that the war is not an option for gaining one country’s purposes.

We live in the peaceful times but the memory of those who gave their life for freedom and independence should always be in our hearts. When is National Memorial Day Concert in 2022 and what does it bring to us? Let’s find out.

The holiday itself was born after the United States of America ended the Civil War and first was dedicated to the soldiers of the North Army killed in the war. Yet after the Great War, the population started to pay tribute persons that were left on the battlefield of this military conflict, too. Today, Memorial Day is about honoring all soldiers that passed away during the battles, happened in and out of the country. The citizens show their recognition and gratitude for the highest price the fallen paid for the future peace.

Since the 70’s, the observance obtained the national status all over the country. The locals go to the cemeteries, the military memorials, and the churches and then are involved in the family meetings, picnics, and sports events that take place during the day. As the sign of remembrance, the national flags are lowered in every city and town.

Interestingly, but the date was originally called Decoration Day. There are lots of the stories about the invention of the holiday and almost the dozen of the cities tends to be considered as the place where it all started. The pieces of evidences claim that in the second half of the 19th century, the groups of women from the South decorated the graves of the soldiers. They even published the hymn that was dedicated to the women who adorned the graves of the fallen Confederates.

First, the day of the memory was announced in 1868 by the national commander of the Old Army. The state that first acknowledged the date was New York, five years later. Perhaps, that’s why the city was proclaimed as the place of the holiday’s origin in the 60’s by President Jonson. But it could hardly be proved. More likely is that every city came up with its own way of commemorating the fallen fighters and that demonstrated the essential need for this tradition to be continued. This resulted in the growth of the movement which reached its peak in 1868.

In fact, it doesn’t matter who invented it. The important thing is that it has been created. It doesn’t separate someone or something, it unites. People gather to honor those who gave everything for them. During twenty years after the proclamation, all north states accepted the date while the southern one refused to observe it on the same day. It went on until the Great War when the commemoration of the Civil War victims was equated to that of the Great War, and all wars at all, victims.

When is International Memorial Day Concert 2022? Nowadays, it’s observed in all states on the last Monday of May although some of the territories have the extra day for praising the confederates, such as January 19 in Texas or June 3 in Louisiana and Tennessee.

In the 10’s, a woman inspired by the poem and the holiday wrote the lines that told that the red poppies are the symbol of the date. She actually was the first who started the tradition of bringing these flowers to the graves. She sold it to friends and colleagues and the money she got she gave to the needy people.

What does National Memorial Day Concert mean? It means calling upon people to integrate, to stand one next to each other and pay tribute to those who were killed for the justice and freedom.

There is a phrase that we hear so often on the radio or the TV that the war touched every house and every family. It is true. No one can say that they have nothing to do with this horrible event. Everyone’s parents, grandparents, uncles, and aunts were somehow involved in the uneasy times of the 19th and 20th centuries.

We need to remember about them to bring up the patriots, to foster the love for the motherland in the children. The wars brought so much pain to the globe. Only those people who could live it through can understand what the terrible meaning this word has. It’s impossible to show all the horror that the military conflicts cause. No one of us can stay indifferent, no matter who we are. All people who went through these severe trials must be called heroes. All of them, without exception.

We are ought to truly believe that every soldier made its last contribution to the common good.
We should remember them because these heroic deeds must live in our souls forever. The ones who waste their life irresponsibly forget about the times when their grandmothers raised their eyes to the sky and prayed to God for the merciless war to be over. We must know and remember, respect and save, care about them – the persons that gave their lives for our future.

Regardless of what day World Memorial Day Concert in 2022 falls on, don’t let yourself be a stranger.

Unfortunately, not all of us understand that to the fullest. Sometimes, we don’t value that life given by the veterans, don’t appreciate the veterans themselves. Once again, the common grief touched everyone. We are ought to honor those who were in the war. Another duty is to be ashamed of the moral downsides of our nature, our vices while remembering the stories of our forefathers…They do have the right to be commemorated. Having lost the present, they gave us the future. Every man who was involved in the war is a great man. Every woman who suffered the horrors of war is a great woman.

We can bestow the living ones with the love, attention, and care, but the fallen ones are only left to be remembered. Do they need our plain words? Maybe glory? The orders and medals? No, all that we can give them is the memory. It’s not necessary to write about it or speak out loud. It takes just the small place deep in our hearts and souls. 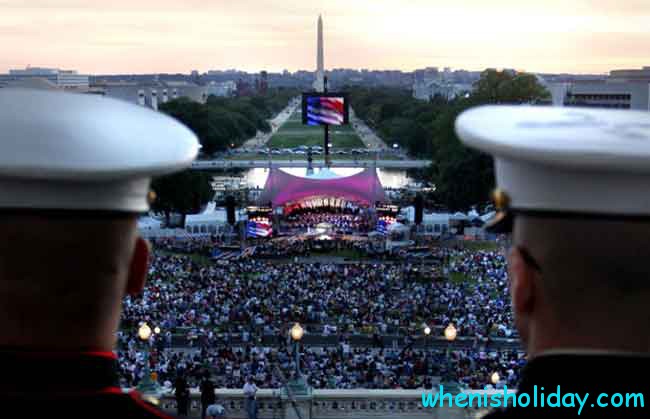 During the Concert that usually takes place in front of the Capitol in Washington gathers thousands of people united by the same goal – to commemorate the victims of the wars. The performances are staged, the footage of the military times is shown and the heartfelt speeches resound all over the lawn.

Once started as the tribute to the soldiers, the Concert turned into the nationwide event that annually draws thousands to the Capitol and millions to the TVs.

What is the date of National Memorial Day Concert 2022? It occurs on May 28.

What are the ways to celebrate this honorable date?

If you live in the United States, your only direction is, of course, towards the Capitol. In case you’re not American or live on the other side of country, you can always organize your own campaign aimed at pushing people around you to feel the all-embracing spirit of the unity in the face of the common intention to show the acknowledgment and appreciation of the many sacrifices there were during the harsh military times.

Carve a space in your calendar, when is Memorial Day Concert in 2022, and spend this day with honor and respect in your heart and mind.

🍮 When is National Cheesecake Day 2022