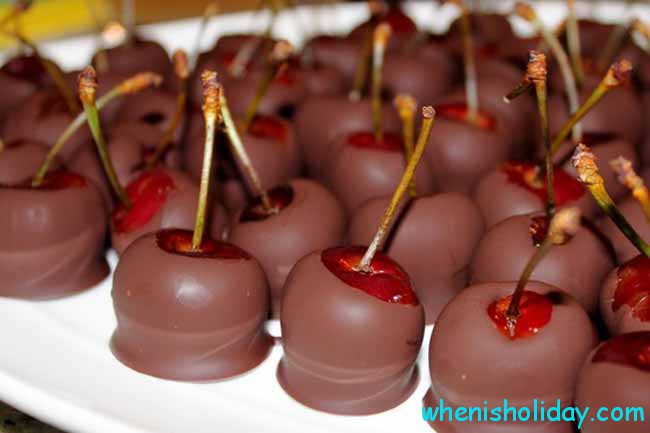 If you are not satisfied with a number of the sweets you’ve eaten during the New Year Eve and the holidays, then this observance will make you swoon with joy.

When is National Chocolate-Covered Cherry Day in 2020? Let’s find it out!

But before, we should delve into the history of the basic ingredients of this delectable dish – cherry and chocolate.

The first, which is the berry, is the gift of a mystery tree as we still don’t know when exactly it was born and entered the ranges of the crop. Perhaps, it happened too long ago, approximately, in the 10th century. The excavations on the places of the primitive humans’ living in Switzerland, Germany, America, and Italy were found the cherry stones. Accordingtothehistorians, the motherland of the berry was the small town on the coast of the Black Sea. From this place, the Roman commander took out the cherry tree after his victory over the Pontian Greeks. This tree was carried by the soldiers as the symbol of invincibility in front of the leader during his triumphal returning to Rome. Since then, when the berry first got on the tables of the noble and ordinary people, it is much-loved and desired by the whole world.

As for the chocolate, its history dates back to the 11th century BC! The Latin America has always been extremely rich in the numbers of the cacao trees. Having once tried it in the ancient times, the history suddenly stopped and then started again in the 3rd century AD among the Maya tribes. In fact, they used the cacao beans not like the food product but like the… money! For ten beans you could have bought the rabbit; for a hundred – your personal slave. Some bright minds even came upwith the idea of carving the artificial beans from the clay. The more interesting moment is that such currency was used right down until the 19th century.

The Aztecs, who invaded the Maya lands, retained their traditions yet started to use the chocolate as the food product, making the unusually to the taste liquid. The very first European who got the chance to try the chocolate was Mr. Columbus – the leader of the Spanish expedition that searched for the shortest way to India. The tasting happened at the beginning of the 16th century in the territories of the modern Nicaragua. Contrary to what you may have thought, the drink didn’t impress the seaman whatsoever. Yet he did deliver the cacao beans to America, located above. That’s how their meeting had happened.

Europe got to know the drinkmade of the brown beans due to Mr. Cortez who won over the lands of Mexico. Of course, the chocolate of those times was bitter because the Aztecs added the corn flour, spices, and the aromatic herbs. The Spanish brought it to perfection having added the sugar. In this country, after the revelation, the beverage became so expensive that some said that you drank the money, not the chocolate. Although the citizens tried to keep the recipe as a secret, soon it came out of the state’s borders. Thanks to the navigators, the news about the delectable drink and its main ingredient, called chocolate, spread all over the world.

When is International Chocolate-Covered Cherry Day 2020? Ask any American, as they should know for sure! They were the ones who invented the delicious combinations of the two delicacies in the 30’s.

What does National Chocolate-Covered Cherry Day mean? It means indulging in a box of the homemade or taken from the store candies!

The chocolate-covered cherry is the dessert that has one important feature: everyone who’s tried it fell in love instantly. The sour-sweet taste of the berry is perfectly blended with the sweet chocolate syrup, while the notes of the alcohol (yep, it can be added) fill the mouth with the pleasant tingling. Well, the candies do give us the unforgettable sensations exciting all of the sense organs! Moreover, their refinedtaste and the ability to melt in the mouth can express the whole range of the feelings the person experiences towards the one they give it to.

By the way, both berry and its fellow are quite health-positive. The first is rich in the carbohydrates, such as the glucose and the fructose. Plus, there is a decent amount of the organic acids, including the malic acid, lactic, and the citric. Among the vitamins, the cherry has the carotene, vitamin Band PP, ascorbic acid, and pectin. Add the iron and copper and you’d get the perfect weapon against the children’s anemia.

As for chocolate, there are some interesting facts. 50 grams of it give us the same amount of the antioxidants as thirty glasses of wine or twenty glasses of the orange juice. Plus, the content of the flavonoids, that protect our blood vessels from thrombosis, is equal to those in six apples!

Regardless of what day WorldChocolate-Covered Cherry Day in 2020 falls on, eat it more than once in a year, we allow you to!

The confectionery classic looks good, tastes perfect and that’s why it is quickly eaten. But not everyone is aware that the process of making the treat is rather simple. Of course, if you stick to some crucial points.

The cherry that would be used in the dessert should be fresh, frozen,dried or even canned. For the more savory flair, the berries are soaked in alcohol beforehand. The latter could be chosen from the widest range of the vodka, cognac, liqueur, rum, red wine, etc. 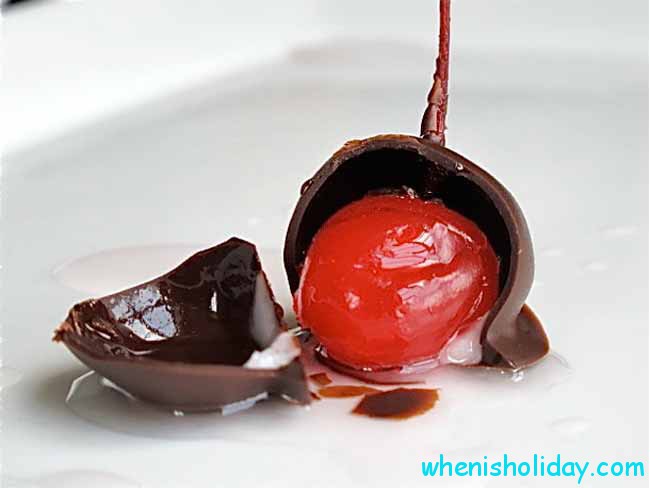 Don’t throw out the sprigs as it’s handier to dip the cherry in the liquid. In case you disobeyed, use the toothpicks or the ordinary forks. The chocolate can be of any sort – the dark, the milk, the white or even the combination of all three. It is melted down in the microwave or by the mean of the water bath. The only rule for the chocolate is to buy it in the original form, without all these waffles, nuts, cookies, raisins, and other specks.

What is the date of National Chocolate-Covered Cherry Day 2020? It annually occurs on January 3rd!

You don’t have to ask us of how you can celebrate the holiday. The only thing you do have to do is making the dessert with your own hands! You remember what we said about the process? It’s simple as falling off a log.

What you’ll need from the food products are these: twenty-four cherries, one and a half of the glass of rum, and four hundred grams of the dark chocolate. You’ve already guessed that we’ll be making the dark-chocolate-covered-and-drunk-with-rum-cherry?

The first preparations should be made two weeks before the main actions. Put the berries in the dish filled with the alcohol, place it in the freezer and leave it there for fourteen days. After the clock rang the necessary time, dry the cherries out on the paper towel. Melthechocolateanddiptheberriesin. Then, put the covered candies on the parchment and patiently wait until the icing gets firm and solid.

Of course, there are dozens of the recipes of this delicious treat. You can use your imaginations and put something really amazing in the practice! Yet don’t forget that the main heroes of the dish are the cherry and the chocolate.

Make a firm fixture in your calendar, when is Chocolate-Covered Cherry Day in 2020, and enjoy the treat without any pricks of conscience for the whole day!

🥟 When is National Grilled Cheese Day 2020