Christmas Eve according to the Gregorian calendar

Christmas is one of the few festive events, the eve of which is also considered a holiday. December 25 is Christmas according to the Gregorian calendar, and it is preceded by a very romantic, bright and tradition-rich holiday. It is called Holy Evening (Holy Evening, Holy Supper). Christians of the Western tradition and most churches of the Eastern Rite celebrate Christmas Eve on December 24. This day is the last of the four-week period of Advent before Christmas, which helps to set up and prepare for Christmas.

How the idea of ​​the celebration came about Christmas Eve according to the Gregorian calendar?

Although the Bible does not specify the exact time of Christ’s birth, it is traditionally believed that he was born at midnight. Perhaps it came from the ancient Jewish tradition that the day begins in the evening. Therefore, Christmas Eve in the Christian religion symbolizes the solemn expectation of the birth of Jesus Christ.

The events described in the Gospel books are known to every Christian. The Virgin Mary and her husband Joseph lived in the city of Nazareth and were expecting a child. They had to come to Bethlehem by order of Emperor Augustus, who decided to conduct a census.

Joseph and Mary did not find a place to spend the night in the city, because everything was occupied by people who managed to arrive earlier. The couple had to spend the night in a sheep shed. Jesus was born there, and his first cradle was a manger with hay. At the moment of the birth of the Son of God, a bright star lit up in the sky.

The first to learn about the birth of the Savior were shepherds from the outskirts of Bethlehem, who were brought the news by an angel. Later, after seeing the star of Bethlehem in the sky and following it, three Babylonian wise men came to the newborn with gifts – gold, frankincense and myrrh. Gold symbolized tribute to the king, frankincense – a gift to God, and myrrh – to mortal man.

Celebration of the birth of Jesus Christ

A long time passed until the birthday of Jesus Christ became a Christian holiday. At first, only the day of his resurrection was celebrated. Only in 336, December 25 became the holiday of Christmas. First it happened in the Roman Empire, and later the tradition spread to other countries. Accordingly, Christmas Eve was celebrated on December 24.

The first mention of Christmas Eve and Christmas in Russia dates back to the 10th century, but only with the passage of time were traditions formed that have reached our times, for example, the nativity scene and decorating the Christmas tree.

A nativity scene was a chest or box with figurines that recreated the events in Bethlehem when Jesus was born. Later, the nativity scene became more diverse — it could be puppet, with moving or static characters; but it could also be live, in which the roles of biblical characters were played by actors. The nativity scene was invented in the 13th century by St. Francis, a famous preacher of Christianity.

The idea of ​​decorating a Christmas tree has its origin in Germany – the Christmas tree was decorated there with candles, apples and a six-pointed star. Later, sweets, nuts and artificial decorations began to be used. By the beginning of the 20th century, the Christmas tree and nativity scene became obligatory symbols of the Holy Supper.

Christmas Eve harmoniously combines religious beliefs with ancient folk traditions. It is known that caroling is an echo of the worship of the Sun god, which begins to gain strength in this period – after the winter solstice. While caroling, young people put on masks, dressed up in animal fur and entered the courtyards, singing festive songs with wishes for the well-being of the owners.

Church officials considered caroling to be a pagan custom and condemned it. Over time, caroling did not disappear, but carolers became fewer and they visit only friends, relatives and close neighbors.

During the times of the Soviet Union, Holy Evening, like Christmas, was a forbidden holiday. The religious component was unacceptable to the authorities, so it was replaced by the celebration of the New Year, which had some Christmas attributes, for example, a Christmas tree. But the people still preserved ancient traditions, and Christmas Eve did not cease to be a solemn, important event for people in both villages and cities.

After gaining independence in our country, Christmas is an official holiday, and Holy Evening is an important and constant part of this event.

Christmas Eve according to the Gregorian calendar in history

What can not be done on Christmas Eve?

They do not invite strangers to their homes on Christmas Eve; it is forbidden to be late for the Holy Supper, because the whole year will pass far from home; you cannot quarrel with your relatives and leave the table without tasting all 12 dishes. On Christmas Eve, fortune-telling is not performed and alcoholic beverages are not consumed.

Where is the most solemn Christmas church service held?

The Christmas service in the Vatican is considered the most solemn. It is held by the head of the Catholic Church, the Pope, in St. Peter’s Cathedral. Thousands of people are usually present at the Christmas Mass on the evening of December 24.

Christmas wreath – what kind of symbol is it?

The Christmas wreath symbolizes the crown of thorns of Jesus Christ. Over time, Christmas colors were added to it – red, green and gold. Red means Christ’s blood, green is a symbol of life, and gold symbolizes sunlight. The evergreen twigs from which the wreath is woven are a symbol that life goes on even in the darkest winter days.

Do you know which star lit up in the sky of Bethlehem on the night of Christ’s birth?

Scientists are inclined to believe that the new bright celestial object could be a comet or the planet Uranus.

How many Christmas trees are grown in Europe to sell before Christmas?

Every year, 60 million Christmas trees are grown in Europe. Usually, such trees grow for 15 years before they are sold for the Christmas holidays.

Postcards for Christmas Eve according to the Gregorian calendar 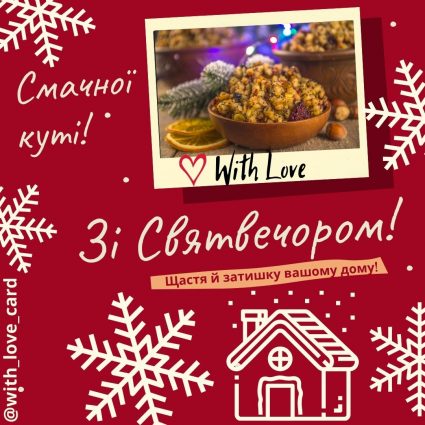 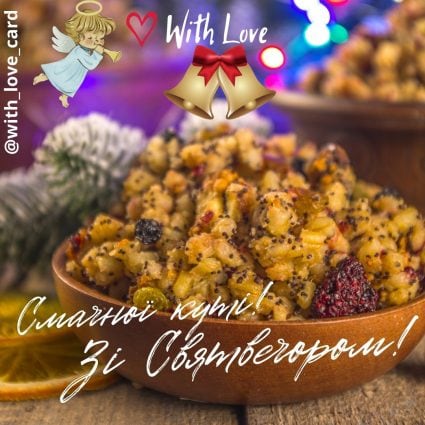 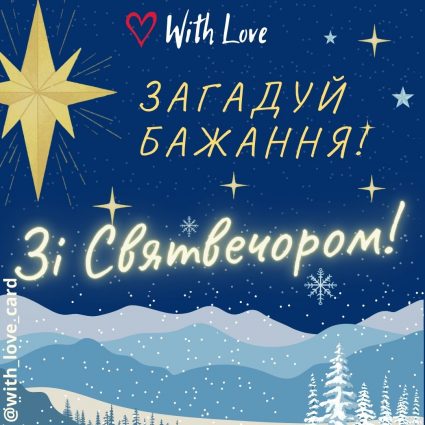 🎁 Christmas Eve gifts according to the Gregorian calendar

How to celebrate Christmas Eve according to the Gregorian calendar?

Christians of the Western rite have a long and serious preparation for Christmas Eve. An important preparatory period is Advent – the four weeks before Christmas, which help to prepare for the sacrament of Christ’s birth.

During Advent, priests conduct services in purple robes. It is believed that this color symbolizes repentance for sins. Believers engage in charity, help the needy, go to church services and decorate their homes.

Usually, the whole family is engaged in cleaning the house before the holiday. They set up a Christmas tree, hang Christmas wreaths from coniferous branches, prepare holiday gifts.

In the evening of December 24, families gather together and wait for the first star to appear. It is a symbol of the star of Bethlehem itself, which showed the way to Jesus to the wise men with gifts. Then everyone sits down at the festive table.

First, they read the Gospel passage and sing the first carol. Therefore, all relatives must taste the Christmas wafer – unleavened bread, which is divided into parts. This bread is consecrated in the church during Advent and is a symbol of the coming holiday. On the table there are twelve Lenten dishes, and under the tablecloth – hay, as a symbol of the manger where the newborn Jesus lay.

Gifts are given to each other on Christmas Eve – they are a symbol of the gifts that the ancient sages brought to the baby Jesus.

When the clock strikes midnight, people open their windows to let the spirit of Christmas enter the home.

At the end of Christmas Eve, families gather at the church for the festive service. This means that Christmas is finally here.

Christians of the Western rite have such a sign: as you spend the Holy Evening, the whole new year will pass. Therefore, on December 24, churches are opened from the very morning, so that all those who want to have time to come to confession and receive absolution of sins before Christmas.

Sometimes preparations for the holiday are no less pleasant than the holiday itself. Therefore, on the afternoon of December 24, we are happy to decorate the Christmas tree together with the children, set up a nativity scene, and hang a Christmas wreath on the door of the house. And in the evening, even non-religious people rush home to spend Christmas Eve with their relatives at the family table. This evening is able to unite families and friends and reminds us that we have much to be grateful to God for.

Christmas Eve is the perfect time to give and receive love. And it’s not only about gifts to relatives – we also demonstrate this love by helping poor people, homeless animals, donations to churches and other good deeds.

The evening before Christmas is always bright and warm, regardless of the weather outside the window. It is impossible not to love it for its wonderful, magical atmosphere of goodness and expectation of a miracle.

When will we celebrate Christmas Eve according to the Gregorian calendar? 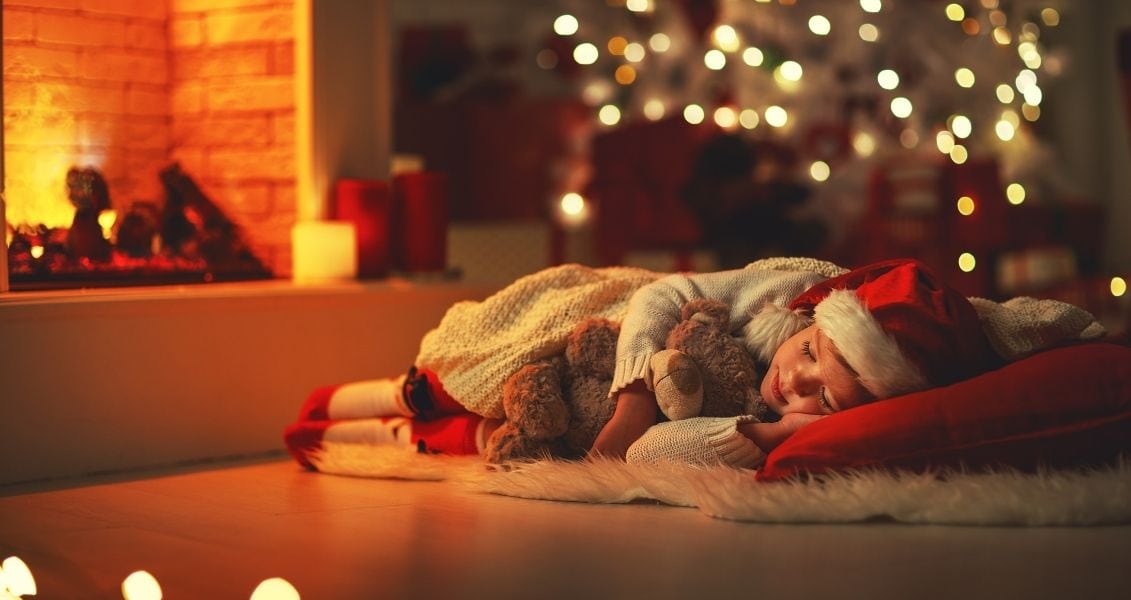 🍎 When is National Johnny Appleseed Day 2022

Day of the city of Terebovlia