When at school, did you happen to tease publicly that nerdy guy from time to time who wore glasses and checkered shirt? Or maybe you caught yourself at watching how the seniors locked up the junior in the toilet? Or you might have been the one who bore the offensive nicknames and stood the mockery of the foes?

All those situations are the straight form of bullying – a phenomenon that is need to be discussed as not only does it make the school years unbearable for a child but also may lead to the kid’s suicide.

When is National Bullying Prevention Day in 2021? Let’s sort it out point by point.

The dominance and influence over others have existed since the human came into being on this Earth. That’s their natural instincts and psychological features – to succumb to the vile motive to humiliate the weaker and feel themselves stronger.

It is doubtful that the issue became critical just now. It has always been there yet for the last few years it received wide media attention. The day we’re talking about calls on us to stop any form of abuse towards the people, especially the one that takes place among the children. It originated out of the mockery but turned into the international observance.

The start of the 2007 academic year at the school of Canada was a common occurrence full of the long-awaited meetings with the classmates, the “much-loved” lessons and the estimation of the newly arrived students. One of them wasn’t just like the others. He dared to wear a pink t-shirt on the very first day of school. The color worked out like a red rag for a bull drawing attention of those who need the injection of superiority. Fortunately, the students weren’t just watching by, they reacted immediately. Next day, two initiators distributed fifty pink t-shirts at the hall calling on the youth to oppose the humiliation as one of the ugliest vices of the human’s nature.

This small yet so significant and brave campaign attracted the authorities’ attention echoing first in the local observance of the anti-bullying day and then in the province-wide proclamation of the date. In 2012, it reached the United Nations organization that set aside the date for educating the world on the need of prevention of this phenomenon.

Regardless of what day World Bullying Prevention Day in 2021 is set by the UN, there are many other “local” dates in the countries designated for broaching up the question of hazing and abuse among the youths.

What does National Bullying Prevention Day mean? It means raising awareness about the issue and what danger it would bring if we go on closing out eyes on that.

It is one of the most widespread forms of the psychological abuse which, nevertheless, is often taken as the usual part of the school experience. According to the researchers, every third adolescent aged 12-18 went through the hard times when studying at school. It doesn’t go leaving any trace. The victims are subject to agoraphobia – the fear of the open spaces, anxiety disorders and panic attacks in the adulthood. The aggressors are diagnosed with the dissocial personality disorder which features the impulsivity, aggression, neglect of the social norms and problems with the setting affection.

On top of that, the bullying means at least several years of suffering for every member of the school community. The troublemakers get the unhealthy experience of the superior strength and increase their own shame and fear of being socially degraded. The bystanders receive the great amount of indifference and the same fright. The object of humiliation may have serious aftermaths related to the self-esteem and trust in people; their emotional development slows.

For the bullies, the coming of age brings the violence in their families. The former sufferers are hard to set the contacts with people. The passive watchers tend to express less compassion towards the weaker ones. There happen more serious consequences. It’s no secret that for the least decades the number of the bullied children who ended it by either committing suicide or injuring and killing their tormentor increased. The stats show that the cruelty of bullying does not decrease. Moreover, the older the child is the less they sympathize with the victim. The question when is International Bullying Prevention Day 2021 is the right one. Because we definitely need to take a stand against the humiliation.

Bullying is a repeated and aggressive victimization of the member of the group (especially at school or college) by the others groupmates.

But why do children enjoy and support this form of abuse? That’s the need of the age. The kids feel the urge to be part of the pack and the belongingness, except for the bright and strong individuals. If they’re united and have the common goal and interests, there’s no place for humbling each other. If they don’t then they might discover that they can unite against someone. Many children say that they like the sense of rapture, daring, fun and euphoria when teasing, punching, tormenting one another because they are together and they are higher.

The more kid is diffident the more they depend on the esteem of the people around and the higher chances that they would take part in mobbing. They are so afraid that one would see they true imperfections that do their utmost to redirect the fire on someone else. 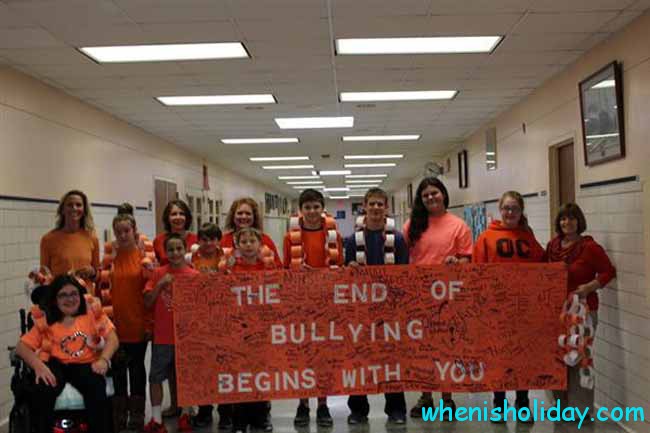 Yet, not every group of children is at the risk of practicing bullying. Why? The point is, it’s up to the adults. It the father or mother or teacher is authoritative enough and does not accept the violence, the child looks up for them. Unfortunately, the lack of parental love, the family abuse, the indifference of the supervisor to the atmosphere in group entail the growth of tension. Sometimes, they even provoke bullying. For example, the much-loved sports contest called the relay. It seems that everyone is having fun yet the children who are not the sports type would catch their portion of cruel jokes as they let the team down. If the coach does not notice and handle this, bullying is inevitable.

Trying the taste of violence, the child can’t stop by themselves. And if they are left to their own decisions, the matter might get much worse. Just read “Lord of The Flies” or “I’m The King of The Castle” and see what could happen if we don’t act. What is the date of National Bullying Prevention day 2021? It’s set on October 4.

First of all, get involved and do not close your eyes on the blatant cases of abuse. Don’t ever by a bystander if you’ve noticed the constant teasing of the overweight girl or goth-looking boy. Inform the authorities of the injustice occurring at school and lend a helping hand to the sufferer.

Do not bully anyone. We are all the same no matter the skin and hair color, body shape, race, gender, sexual orientation, and appearance. We are all people and deserve the right to be treated with dignity.

If you’re being bullied, do not keep silence. Report the school principal, ask for the help of your parents and do not get scared. It’s not the mistake of the kid being humiliated; it’s a vice of the bully.

Mark in the calendar, when is Bullying Prevention Day in 2021, and give this issue no quarter. 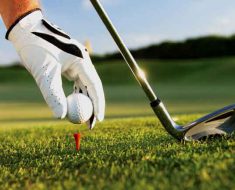