In the contemporary world there is a great amount of various holidays devoted to wild animals that are endangered. But unfortunately, many of us even don’t know about their existence. For example, can you answer the question “When is World Lion Day in 2022?” and do it without any serious thinking? It’s a pity but the most typical reply will be negative as people have never heard about this special occasion adoption.

That is the main reason, why we are going to discover this mater in details. Modern men and women should know about this representative of the cat family as much as it is possible.

Of course, answering the question what day World Lion Day in 2022 is, it would be rather desirable to introduce the historical background of this matter. However, we haven’t been able to find out who the first person, that proposed to celebrate this date, was and why August 10 was chosen.

But it will be rather interesting to note that the first lion that was kept in captivity was the Assyrian one. And it was happening in 850 BC.

Tamed living beings from Northern India lived at the house of Alexander the Great. He used them mostly for gladiatorial fights.

In the distant east, the lions were mostly taken by wealthy and rich Indian princes. In their turn in Europe these animals often became the so-called decoration of royal families.

In 17th century the representatives of this type appeared in the leading European zoos, the largest of which, the London one, was opened in 1822.

In the 19th century the trade in wildlife flourished together with the other colonial trade. At that period of time lions were ordinary animals in the markets and were sold at a relatively low price. Why? – The matter is that it was quite easy to get one from the African continent. Unfortunately, many animals died during transportation. The lion hunters represented the heroic images on the background of the dead animal. They killed them, dividing all the creatures into “good” and “bad”, feeling themselves like real heroes.

What does World Lion Day mean? This special occasion is organized regularly in order to draw the people’s attention to the dangerous situation, which has appeared with these beautiful and so elegant representatives of the wild surrounding world.

Today the most part of these animals lives in the African East and South, and unfortunately, their amount reduces year after year. In accordance with experts’ estimates, the population has been reduced significantly just for two decades. For example, in 2005, the approximate amount of lions varies from 17 and up to 47 thousand individuals, while in 1970 there were more than 100 000. The main reasons for this reducing are the matters of climate changing, different diseases and thoughtless human behavior.

We also can’t but mention that some groups of lions are considered to be completely geographically isolated. This situation leads to a huge reduction in genetic diversity.

That is the explanation, why the world famous company called International Union for Conservation of Nature made an important decision and decided to recognize these animals as a vulnerable species. And at the same time the well-known Indian lion is an endangered kind.

The contemporary preservation of Asian and African lions is nowadays facilitated by various actions, including the creation of convenient national parks and comfortable and safe reserves.

So you have already known that the answer to the question “When is World Lion Day 2022?” sounds like August 10.

And it is really true. This holiday is celebrated annually all over the world. Unfortunately, over the past 50 years, the number of these king animals has fallen dramatically on the planet, up to about 80%. A human is the main rival of the lion in the struggle for territory. The matter is that we take away their ancestral hunting grounds and can’t offer new ones. Conflicts between lions and people are increasing, and, as a result, the animals lose, of course.

All in all this notable date is created to draw attention to its menacing situation once again. In many African countries you can visit various scientific and concert events. They take place in support of the royal predators.

Some nature reserves organize completely free tours. In the Malawi park, for example, tourists usually have a unique opportunity to watch lion prides. In the city of Livingston, in Zambia, there is a colorful Lion Carnival. In Botswana, a charitable campaign takes place along ancient lion trails.

When is World Lion Day in 2022, calendar is any time ready to remind you. But do you know how to celebrate August 10 properly?

Unfortunately there are no any special customs and rules. But, frankly speaking, it is not a serious problem for those who are going to be involved into this trend, as you can always invent something special just for you, your friends or family members.

For example, you may change your profile photo in the popular social networks to a picture with a lion. Not for a long time, of course, one day can be quite enough. Draw a sketch or propose your children to do this. 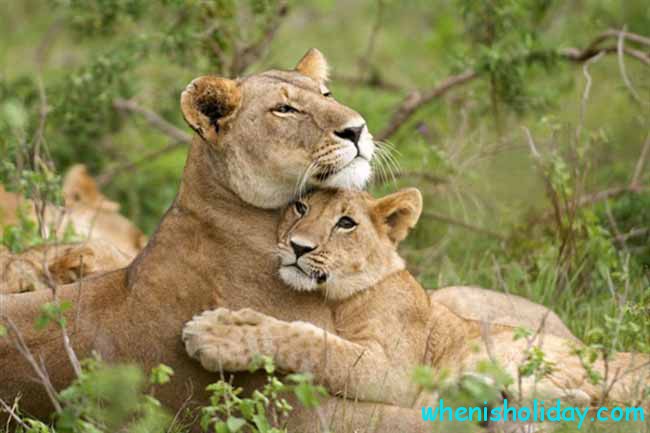 As it has been mentioned above, the holiday is celebrated on August 10, just in the middle of the summer and this simultaneously means that you can organize a terrific party outside. And we have already had a special contest for all of you. – Find out who may create the loudest roar.

And the most honorable way to keep this event is to sponsor one of the numerous charity organizations, which are dealing with the lion saving.

We have already told you the answer to the question “What is the date of World Lion Day 2022?” and perhaps  August 10 will be spent by you in one of the zoos in the attempts to find out something new about these terrific and at the same time so amazing living beings of the planet.

Read more:  Memorial Day of the Martyrs Cyrus and John and with them the Martyrs Athanasius and her daughters Theodotia, Theoktista and Eudoxia

In general there are usually many arguments about whether it is possible to call this living being a real king of other animals. Why? – The matter is that lion is not the largest representative of the cat family, as the leading role belongs to a tiger. But all the same, when you meet the creature in nature, you feel a certain trembling. This is a truly beast, that has a powerful body, a wide head and four muscular paws. In wild nature a lion grows up to 2.5 m, and even a tail is a meter long. Males are larger than females in 1.5 times. In addition, the pride of the males is a beautiful and dense mane. The coloration of these animals varies from light yellow to dark brown. The lion is armed with claws, which can be almost 10 cm each.

But have you ever heard that lions play the most important role in the various reserves? This tradition has become popular since the second part of the 18th century.

Believe you or not, but up to the present moment more than 1,500 African and 150 Asian lions can be seen in zoos all around the planet. But at the same time we should mention that the aims of their maintenance are quite different. The authorities may preserve the species or show these exotic creatures to the public.

By the way it is interesting to say that in captivity, these animals much live longer than in wild nature. According to the specialists, they can live up to the age of 20 years old. For example, the famous and so beloved lion from the Honolulu Zoo called Apollo died at the age of 22 in 2007, and fortunately, his two younger sisters that were born in 1999 are still alive.

🗣 When is International Mother Language Day 2020