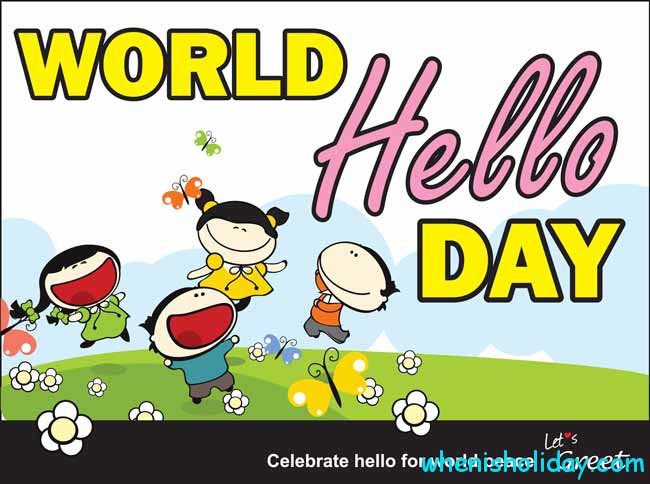 In the modern languages there are words that are spoken every day by all people in various situations. They are so common that we even don’t pay much attention to their existence. Do you believe us? No? – Oh, could you reply the question like “When is World Hello Day in 2022?” immediately? Or maybe would you like to have some time for thinking about?

Unfortunately, the most typical reply is negative and that is why we’ve made a unique decision to discover this matter in details.

Of course, we understand that it is almost impossible to answer “When is International Hello Day 2022?” without paying serious attention to the special occasion historical background.

In general, this notable event was invented by two American brothers, Michael and Brian McComack. They did it at the height of the Cold War in response to the conflict between Egypt and Israel. “We need a simple but effective action,” they decided and sent letters with cordial greetings to all the ends of Earth. The sent letters did not contain any appeals, they only offered to greet somebody else on the planet.

This idea was supported in more than 180 countries, not only by ordinary people, but also by state leaders. Today the World Day of greetings is celebrated by people of all professions and ages. In general this is a perfect day for friendly greetings, joyful emotions and good mood.

What does Hello Day mean? Frankly speaking, it’s up to you to decide whether is special occasion is important for you and whether it’s necessary to celebrate it in general. However, why not to be involved into something warm, hearty and amazing?

However, we are able to great each other not only with the help of typical words. In fact there are many ways to do it properly and interestingly at the same moment.

E.g., Europeans and Americans use shaking hands as the typical welcome gestures and features. A young American greets his friend, slapping on the back. In France, in an informal surrounding, even unfamiliar people kiss each other when they meet and say goodbye, touching each other with their cheeks alternately and sending one to five kisses into the air.

Emotional Latino Americans like embracing, the freezing Laplandians love rubbing their noses, in so distant Polynesia locals rub the same part of the face and beat each other on the back, the male Eskimos lightly hit mutually with their massive fists just on the head and on the shoulders.

The Samoans prefer to sniff each other, the Tibetans take off their headdress with right hand only, and put left one behind their ears and put out their tongue. In North Africa sometimes it is accepted, bowing, to put the right hand to the forehead, to the lips and to the chest – this should mean “I think about you, I’m talking about you, I respect you.” Some peoples of Africa, as a sign of greetings and deep respect, give the pumpkin, holding it in their right hand. In the Aqamba tribe in Kenya, they spit on the counter in deep esteem, and in the Masai tribe locals spit at first, then spit on their own brush and then shake hands. The Zambesi clap their hands and curtsy.

In India, hands are folded together and respectfully pressed to the chest, while the Arabs cross them on the chest. Some Indian tribes in America were taken just in case to squat until the stranger they met approached and noticed this peace-loving pose. Sometimes they took off their shoes.

In our attempts to give the wide reply to what day National Hello Day in 2022 is, we can’t but mention the following pieces of information.

In the modern world, the most common gesture of greeting is a handshake. This is one of the oldest forms of greeting people. There is a belief that initially the handshake appeared in primitive warlike times – stretching out each other’s hand, people showed that they did not have weapons, and they came in peace. That’s why usually they serve only the right hand.

According to another version, the handshake arose in the days of the chivalric tournaments. If the duel of the two knights was delayed, the opponents drove up to each other in order to discuss the peaceful outcome of the fight. The knights held out their hands for a handshake and held them until the end of the talks, thus protecting themselves from possible deception and attack from the enemy. Perhaps this is why the handshake is now common among men.

Believe you or not but researchers from the University of Colorado analyzed the composition of bacteria that inhabited the hands of different people. It turned out that women’s hands live one and a half times more varieties of bacteria than men’s! According to experts, this fact is due to the higher acidity of the skin in men, the differences in sweating and fatness in both sexes. The total number of species of microbes living on the palms was three times higher than on the forearm and elbows, and even exceeded the number of bacteria that inhabited the mouth.

However, there are no reasons to frighten about this fact, because a greater number of detected bacteria are either harmless, or beneficial to the human body, and many of them even prevent the colonization of pathogenic microorganisms.

When is Hello Day in 2022, calendar will surely remind everybody. That isn’t a problem indeed. However, some contemporary people don’t know how to spend and to celebrate November 21 properly.

We are going to frustrate those, who want to get the lists containing to tips with the most interesting ideas of this notable event spending. Why? – The matter is that there are no any certain traditions, rules and customs for its keeping.

Read more:  International Day of Remembrance and Commemoration of Victims of Terrorism 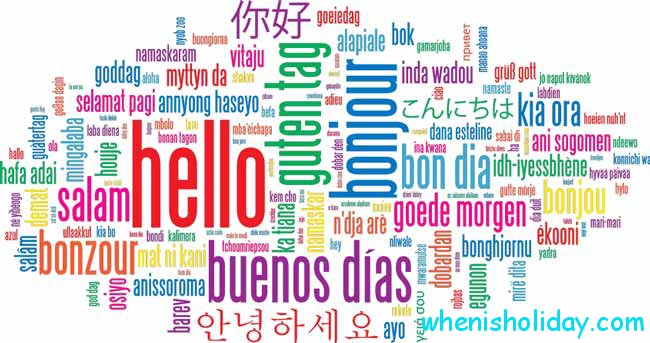 You can send various cards to your friends, relatives, colleagues from work or even strangers if you like. Like the establishers ask them to say hello to somebody else.

Some people also like to organize or to participate in different flash mobs, the main idea of which is to say hello and to hug as many passers-by as possible.

Trying to get the answer to the question “What is the date of World Hello Day 2022?” we want to find out something amazing about this matter, as the pure reply like “On November 21” seems to be rather boring.

Have you ever thought about the fact that each nation has its own customs to greet each other? We are almost sure that not. It is not a serious trouble indeed as the international etiquette is essentially the same: when meeting one another, people wish the surrounding everything wonderful and prosperity, a perfect day or great success in work.

Sometimes this simple movement is able to  save a life, as, for example, in the history of one owner of the London restaurant Mark Gurieri. He shook hands with one of his visitors, who turned out to be an experienced doctor and this saved his life, because Gurieri’s hand seemed too “loose and fleshy” to the doctor and he suspected a brain tumor from a man.

The most massive handshake was the action that took place on January 14, 1996, when, during 8 hours at the trade fair in the Indian city of Gwalior, Yogesh Sharma shook hands with 31,118 visitors to the fair.

Day of the National Guard of Ukraine