Animals are our friends, as the saying goes, and even the most menacing of them are in desperate need for our protection and support. Looking through the list of endangered beasts we expect to see the names we are not familiar with such as sifaka, hairy-nosed wombat and the like. But what we do not anticipate to know is that one of the most vulnerable species is the lion. How come it happened that the king of the jungle, the mighty feline, is under the threat of extinction?

The date in the calendar was set aside for spreading the word about the sword of Damocles that hangs over the predator’s family. So, when is National Lion Day in 2017 and what can we do to save those majestic creatures from the tragic end?

Discussing this serious topic, we are ought to start with the history of how the lion came into this world. As the man began his way on the Earth in Africa – the cradle of civilizations – so the roots of the beast go back to this ancient region. Although the long-maned hunter descended from the panther and lived next to the people from long ago, the first mention of the creature in the history of the mankind dates back to around 32,000 years ago. A picture on the scale depicted the animals followed by those predators and expressed the prehistoric folk’s obvious fear and fascination of the powerful cat.

Moving from the African continent, together with the people, the lion settled down in Asia, Europe and America becoming a single four-legged mammal found in almost every part the globe. The cave species is the direct forefather of the modern African and Asian lions. They are still the startling, strong and stately felines that rule the kingdom of the animals. However, with one little difference – the number of the animals ranges from 29,000 to 30,000 creatures living only in India and several sub-Saharan countries instead of the countless beasts roaring all over the world.

The merit of designating the World Day belongs to the Big Cats Rescue organization which presents a reserved area where the wild felines, despite the size, are protected from the disastrous influence of the mankind. The volunteers and members of this body have already saved myriads of the big and little suffering “kitties” that were beaten at the zoos, abandoned by the irresponsible owners or abused by the man. Their main goal and sacred duty are to stop the violence against the felines and to obviate the threat of them being extinct in the wild.

Thus it is those noble and selfless people who since the end of the 20 century have started the process that makes humanity see the truth about the big cats’ situation, including the lions. The holiday in the latter’s honor is to be held for the 5th time. We should definitely thank them for their work and help get the word out of when is International Lion Day 2017.

What does National Lion Day mean? It means to boost understanding among all the conscious citizens of how important it is to conserve the population of the lions and what a huge role they perform in our world. The well-muscled hunter doesn’t have any natural enemies yet the amount of the prides, comparing to those of the 70’s, has decreased unexpectedly and extremely fast.

And there are many reasons for that, most of which originate from us. The-man-and-the-wild conflict lasts for a long time, especially at the lands of Africa. The locals do everything they can to protect their farms, livestock and even their own lives from the lions’ attacks that happen to roam or settle nearby. Thus the habitat of the cats reduces together with the numbers of them because oftentimes people kill the animals for the others’ safety. Moreover, the human encroachment also entails the lack of prey necessary for the wild hunters to feed on.

Other individuals responsible for the extinction of the species are the poachers. The skin and bones of the beast are valued highly at the illegal market that’s why the phenomenon of the bloody hunt grows along with the victims suffered a lot before the brutal death. Next to those monsters stand the ones who kill the lions for their meat which is a kind of delicacy for the gourmets. The foodstuff is snapped up at the heavy sum not only in Africa but also in the US and Europe causing innumerable killings annually.

The king plays a significant role in maintaining the balance of the fauna and the general ecosystem as it stands at the top of the food chain. It also has the cultural, religious and economical meaning. For the latter, the cat brings lots of money for the countries that build and keep the sanctuaries and national parks for the prides. In terms of religion, the lion presents the symbol of the highest divine power among the African tribes; the stone statues sit proudly at the guard of the many sacred building all over the globe. As for the culture, it embellishes the national flags, it features in the dozens of movies and cartoons (we all cried at the Lion King movie, didn’t we?), and is known as the main star of the different ads and brands (like Metro-Goldwyn-Mayer famous caption).

Who is this good old brother lion? Originated from the Panthera family, it is a powerful, graceful and fearless beast with the strong body and jaw. Every animal dreads its ferocious look while the big cat itself is afraid of nothing and no one. Well, it must have had a good reason for being honored to get the name of the king of the jungle (or, another version, of the beasts). 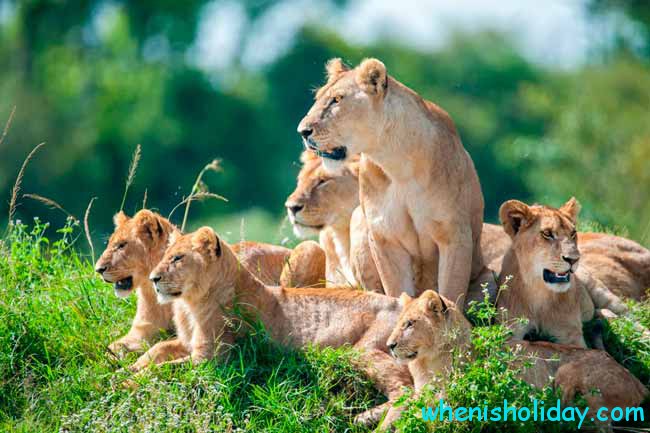 Lots of people fear this unpredictable predator and there’s sense in their apprehension. However, witnessing the sturdy cat in the wild, not on the picture, is the fascinating experience truly worth overcoming your instinct of self-preservation. The author themselves once saw the maned feline in the Mikumi park in Tanzania and that’s just unspeakable. Even knowing that this fellow is full and was basking in the sun idly, we can’t get rid of the dangerous vibes that were coming from the cat. And those 50 meters that separated the car and the purring kitty were nothing but a simple jump for it.

The lion is no doubt a menacing animal. But it gets more and more helpless in the face of the other cruel creature – the man. No matter what day National Lion Day in 2017 takes place on, we should always think of the consequences of our actions towards nature and its children.

How can you celebrate August 10? The most serious step would be to join the movement defending the big cats abused by our own hands. However, any gesture that helps raise awareness of the lions’ fate is welcomed.

For example, you can spend your usual working day in the theme kigurumi, or speaking the simple English, the costume of the lion. It’ll obviously draw some attention to yourself and you’ll be able to take advantage of the opportunity and initiate the people around into your noble motives. You can also be involved through the social networks and donations!

If you’re concerned about the issues that threaten the animals, you should mark off in the calendar, when is Lion Day in 2017, as the millions of people have already done, and together find the solution of this major problem.

🕍 When is World Architecture Day 2022