When is St. Andrew’s Day in 2022? – Frankly speaking, it is not an easy question to be answered to. Why? – The matter is that it is considered to be a religious holiday, and as a result not so popular all over the world. This day is celebrated on December 13 by Orthodox and its full name is the Day of St. Andrew the First-Called Apostle.

Up to the present moment it is known well that Apostle Andrew was born in Galilee and his name can be translated from Greek like “manly”.

Apostle Andrew the First-Called has got his name, because he was the first person, who followed Christ, according to the legend. This man was also the first, who heard the word of God and followed the Christ everywhere. After the Resurrection he was on the Mount of Olives at the time of the Lord’s Ascension into heaven. 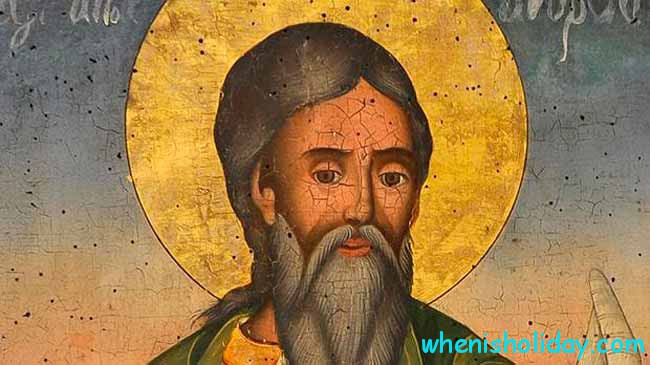 After the descent of the Holy Spirit the Apostles Andrew got the part of the Balkan Peninsula and Scythia for preaching the Gospel.

After returning to Greece he treated too many people just by the laying his hands on problem areas. After that a great amount of people believed in Christ. This event caused irritation and hatred among the local ruler called Egeata. As a result the Apostle was sentenced to death by crucifixion. To prevent the rapid death Andrew was tied to the cross, like the letter X. Being already on the cross, the Apostle was praying constantly, and at the time of the soul separation from the body a light was shining all along the construction.

Being sentenced to death, he asked the authorities not to crucify him on the same shape of the cross. He didn’t like the idea to die in a way Christ was crucified. His request was granted, and up to the present moment it is believed that St Andrew died on the cross made from two folded logs. This structure later became his religious symbol. By the way not many contemporary people know that it was just the cross, which was taken as a base for numerous “St. Andrew’s flags” all over the planet. The most popular ones are Scotland, Ireland, the Navy of Russia etc. That is why the representatives of this countries most commonly answer properly the question “What is the date of St. Andrew’s Day 2022?”

Andrew’s Day in different corners of the world

Nowadays St. Andrew is considered to be a powerful patron saint of some European countries, for example, Russia, Ukraine, Scotland, Greece and Romania. All of them have their own rules and traditions of this very day celebration.

For instance, almost everybody knows what day St. Andrew’s Day in 2022 is in Ukraine. Why? – The matter is that there it is believed to be one of the most mysterious and interesting moments of the year. Every year in the evening of December 13 people try to predict their future.

Locals called this holiday Kalita. According to the tradition it is a holiday of guys, and that is the reason why they are allowed to misbehave in any possible way during St. Andrew’s night, when the girls are trying to find out their fate.

At St. Andrew’s Day people listen to the water in the ponds. If water is still, it means that the next winter will be good, if it is noisy frost and blizzard are coming soon. In Ukraine people also believe that if on this holiday it is snow, which doesn’t melt, it will stay another 10 days.

By the way we should mention that the answer to the question “When is St. Andrew’s Day 2022 in Scotland?” will be quite different. Why? – Because the local people celebrate it on November 30.

This holiday in Finland

This day the Finns say, “Antti welcomes Christmas.” Beginning from this very day you will be able to see the huge spruces on the main city and town squares.

For a whole month, when the so-called forest guest is being decorated, local kids can take part in this merry event. As a rule they are given the lower tree branches. The kids are taken to different excursions, during which boys and girls are allowed to hang on the Christmas tree something they really like. 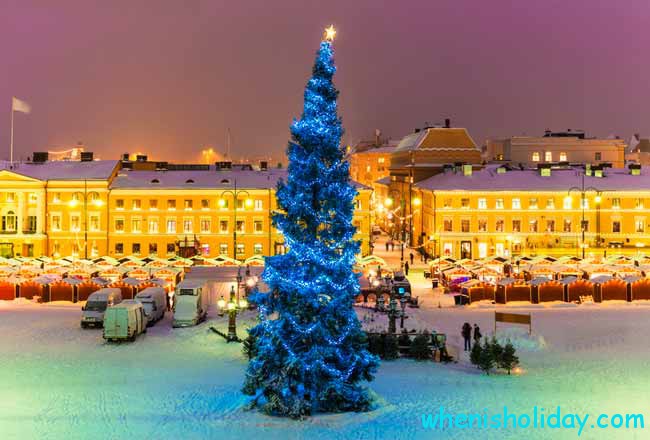 One of the streets is called Christmas and there you will be able to see a great amount of festive illumination, which make this place especially beautiful and lush.Frankly speaking, no matter what place will be chosen this year, but in Helsinki Aleksandrinkatu has been taken for this purpose for nearly fifty years.

This opening of the Christmas street in Finland is the official start of preparation for the most mysterious and expected holiday of the year. One of the first signs of which approach is the setting of the main Christmas tree in the center of the city and the decoration of streets with various Christmas lights and buildings – with the original illumination.

By the way we can’t but mention that the tradition to use the Christmas lights was born more that 150 years ago. They usually symbolize faith, hope and love. Previously the traditional lamps were made of wood with thin tallow candles inside. Special oil paper was used for a shade. And in 1913, above the street of Suurkatu in Pietarsaari people saw different crosses, anchors and hearts made of light bulbs for the first time.

In the Finnish capital, the first fires were lit on December 13, 1930 just on the St. Andrew’s day. Now the lights over the city streets as well as the holiday shopping are considered to be the important part of Finnish Christmas and the festive mood.

Another sign of the Christmas approaching is the appearance in Finnish stores of a huge amount of various chocolates, Christmas cakes of puff pastry in the form of stars and a Christmas drink called Glega, which is drunk hot with the addition of raisins and almonds.

The name of this festival came from the name “Andrzej” (Andrew), which is considered to be one of the most popular male names in Poland.

This holiday, which related to the national ones, is celebrated on the night from 29 to 30 November and is loved by all people in the country. That is the reason why in Poland you won’t have any problems with the question about when is St.Andrew’s Day in 2022, calendar will remind you.

During the numerous parties young people in towns and villages try to predict their future lives. For this purpose the water is usually poured into the melted wax and with the help of the contours people see the silhouettes of those with whom they will share the following life. By the way, the images can be quite different.

Unfortunately every year the folk traditions disappears. And more and more young Poles celebrate this day in the clubs, discos and friendly companies.

At the end we want to mention that St. Apostle Andrew is considered to be a patron of all the professions related to the sea. He is prayed for the protection of those who go to sea. This saint also protects interpreters and foreign of language teachers. Parents of daughters and girls on St. Andrew’s day asked about the successful marriage.