What do you think, what connects the dandy James Bond with grumbling Donald Duck and meticulous Hercule Poirot? Perhaps, you’d say those three are, well, fictional characters. Okay, then we’d add a singer Janelle Monae to the list and ask again, what’s the detail that makes them so distinctive from the grassroots?

We’ll give you a hint – it is a piece of accessory that once was intended for the men and for the formal occasions only but nowadays is equally worn by the women as well and regardless of the dress code. In a word, meet the bow tie – the hero of our article today.

When is National Bow Tie Day in 2022 and who’s winning the ever-lasting battle between this and the necktie? Read on!

In the old days, you’d have hardly found a man who went out of the house without the hat or the jacket. The unbuttoned collar of the shirt was an inconceivable thing: the male was obliged to wear the neckwear, be it the scarf or a square of cloth.

Do you feel the air of the French chic that the bow tie emits? No wonder that you do because it was popularized exactly in the motherland of the cinema and ballet. However, a few people know that those who eat the frog legs adopted the quirky accessory from the… Croatians!

Yes, the country with the sapphire sea and rich history has the merit of coming up with this elegant accessory. The French noticed the thing wrapped around the necks of the Croatian soldiers during the Prussian wars of the 17th century. Records have it that the band of cloth served the purpose of bringing the collar leaves together, and it caught the eyes of the French enemy so strongly that they took it back to their kingdom.

It’s debated whether the Croatian sort of the thing – that hadn’t any bow – was slightly modified and turned into today’s shape or it just directed the inventive people onto tying it in a bow. Nevertheless, this part of attire has flourished since the 18th century, first among the upper crust community of France, then the professional circles have joined – intellectuals, politicians, architects, and, finally, it gradually became the folks’ accessory all over the world, too.

As for its deep-rooted opponent called the necktie, it has never had the touch of elegance and light foppishness, characteristic of the bow tie. In the course of the 90’s, the long fellow excelled the latter in popularity due to the half-baked trend in fashion proclaiming the simplicity over the stylishness. However, that wasn’t for long, and since the new millennium, the perfect addition to the tuxedo has gathered steam once again. People always love to dress up, not to dress down – that’s the secret of the refined thing’s success.

What do you think does the real gentleman know the answer to the question of when is International Bow Tie Day 2022?

What does National Bow Tie Day mean? It means the period of twenty-four hours to appreciate this sporty part of wardrobe!

Well, the thing has always been the icon companion of the tuxedo. This time, it might have lost its exclusive belonging to the upper-class occasions – a lot of people wear it to work, or just for a walk in the park. Still, every formal garment of the man looks wonderfully complete with the little knot with the loops fastened to the collar. It indicates the confidence of the owner – as it draws attention to the face – and their desire for making themselves known.

The bow ties are not for everyone – you decide whether it fits your style or not – but they’ve never been out of fashion or demand. The assortment of every manufacturer of the neckwear surely includes the models with the wings which always find their buyers.

As the saying goes, no one wearing the neckwear like that can be entrusted with an important affair. Given that Winston Churchill himself always added the accessory to his daily business suit, we consider it to be too hasty. Many reputable persons were noted for sporting in this piece of cloth, from the US presidents Abraham Lincoln and Theodor Roosevelt to the famous fashionistas like Karl Lagerfeld and Manolo Blahnik.

So, adorning yourself each day with that catchy item, regardless of what day National Bow Tie Day in 2022 falls on, seems like a good thing, after all.

The bow tie is a fabric ribbon that you wrap around the neck and tie firmly in a symmetric knot in such a way that the two ends make up the loops. You’re likely to find all kinds of cloth that are used to sew the thing but the most popular are those of the silk – the noblest one, the synthetic – the cheapest one, and the cotton – the most pleasant to touch one.

Generally, there are two basic variants of the accessory: the classic ribbon that requires being tied around for the every time you want to show off, and the handy version that is caringly tied by the manufacturer beforehand. Moving to the shape options, the most versatile one is the “butterfly” kind with the shape that looks like that of the insect – the favorite of Mr. Churchill. The “batwing” shares the straight edges with the aforementioned type but is narrower – and is preferred by Mr. double-oh-seven. The “diamond”, in its turn, resembles the latter yet the edges are of the pointed form that reminds of the faceted jewel. 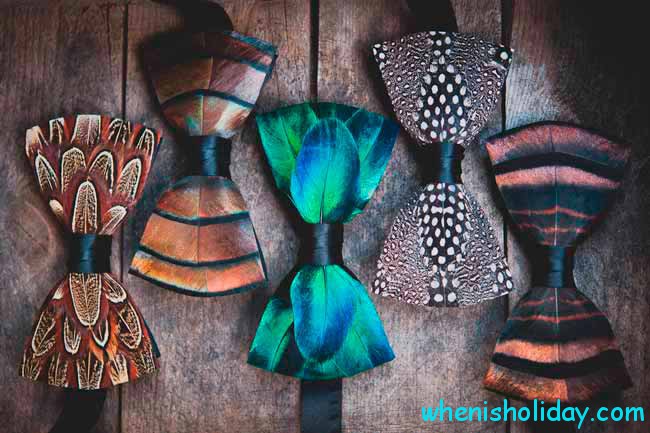 It is usually worn with the shirt and the add-ons like the vest, jacket or cardigan. The thing perfectly goes with the retro style, be it the classic coat or the woolen suit. British country clothing is also the best background for the accessory with its tweed jackets, hats and caps, and checkered shirts. The bright-colored trousers, penny loafers, and button-down shirts will make friends with the flashy item, too.

Read more:  👨‍✈️ When is Defender of the Fatherland Day 2020

If you’re an amateur, the best way to celebrate the holiday is to learn how to tie the knot with the wings! And it’s not that difficult as you might think. Two or three training sessions and you’ll be of a pro level.

We’d even provide you with some instruction: slip on the fabric band with the seams facing inside, the right side of the ribbon should be longer than the left one. Place the latter over the other forming the cross. Pull the left end towards the neck and pass it through the loop. Fold up the right part like the letter Z, put the left one over it and shape it like the Z, too. Pull through the loop the folded right end and stretch out the ends, making them equal. Your bow tie is ready!

Then, the great step in honor of the festivity is to teach someone this skill that you’ve just obtained. The lesson will be more interesting if you’ll prepare in advance and spice it up with some quirky facts about that piece of wardrobe (which you’ll discover at the end of the article). On top of that, there’s a charity organization called the Bow Tie Cause Foundation that helps to educate the underprivileged children and youngsters. So why not talking your colleagues or friends into donating some money for the common good and to honor the holiday?

And, of course, the best way to spend the day is to throw a “bow tie” party with the strict dress code (you know the point) and the theme treats like the cookies or candies.

Tick off in the calendar, when is Bow Tie Day in 2022, and wear the item proudly for the whole day long!

When is National Dump The Pump Day 2022