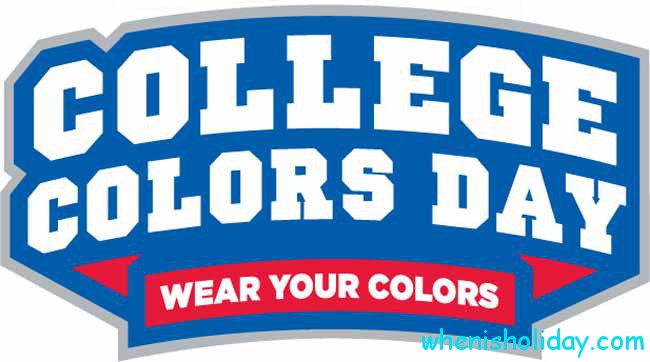 There is a holiday celebrated in the US only when the whole Harvard walks around in wine red, Clemson shows off in orange-purple-white while other schools present all colors of the rainbow as well. You must have guessed that the date is somehow connected to the educational establishments but are probably wondering what the tints have to do with all that?

Well, a lot, because it’s College Colors Day – an extremely popular festivity that is hosted annually to the big joy of thousands of American students. When is National College Colors Day in 2022 and why’s that so important? You’re several lines away from finding out!

The holiday itself came about in 2004 at the initiative of the CLC organization. Giving it its full title – the College Licensing Company – this one is responsible for representing around two hundreds of the US educational institutions and promoting and protecting their brand products and merchandise.

The start of the CLC activity began in the 80’s when its founder got to meet the ever-popular coach of the University of Alabama, Bear Bryant. Working out the plan on the licensing agreement with the man, he found out that this well-known university didn’t have any program that would represent its proprietary name. And that’s how the flourishing of the company was launched as after the aforementioned university eight others followed immediately, gradually growing up to the current number of the CLC clients.

Where are the symbols of the every university and all items related to that used as often as possible? On the football stadium, of course! That’s why the licensing organization aspires to develop and retail only the high-quality products with protected trademark of each of their customers.

No wonder that it was the CLC that proclaimed the holiday, as the color is the main feature of the colleges. With time, the event gets more and more add-ons. Thus, for the last few years, there is an intercollegiate contest being held with the prize money of $10,000. All the universities have to do is just to show the strength of their fandom.

So, it’s a burning question, when is International College Colors Day 2022, across the United States as lots of the interested want to partake.

What does National College Colors Day mean? It means the kingdom of the school spirit! You can barely find another way of integrating the student community besides the common feature that attracts attention from afar – the color of your alma mater. They clearly indicate which “house” you belong to. We’d say that this holiday is the all-schools-wide festivity that both praises each of the educational bodies taken separately and unites all those different little “states” into one large institution – the brightest period in the people’s lives called studenthood.

However, time goes and College Colors Day had a little twist in its main idea obtaining another integral part that is so magnetic to the university’s brotherhood. What is the most much-loved activity that captivates everyone in the school? That’s football! The sport that is adored and respected greatly, especially in America, and where the colors play an important role.

Usually, the team players array themselves in the shades of the school. Because the holiday coincides with the start of the football season, oftentimes it is associated with the very first match that opens the competition. Popularizing the idea of supporting their teams, the authors of the event suggest everyone getting dressed up in the native blue-yellow-red or whatever. On top of that, trying to draw in as many students as possible, the CLC set about launching the contest with the winner getting the tickets for the final of the national championship. Well, it looks like the main idea is to always support your alma mater no matter what day National College Colors Day in 2022 takes place on!

College Colors Day is the date when the students are encouraged to wear the shades of their school. It might be the piece of clothing – varsity jackets, brand sneakers, the scarves, or the head gear such as the hats and caps, or the accessories like the bags, backpacks, pins.

The tradition has it that every university in the US has its own symbols since olden times, and the main part of them is the color. Interestingly, the latter was adopted by chance in the most cases. Likewise, the University of Princeton boasts that the history of its black and orange heritage dates back to the second half of the 19th century when the humble freshman suggested taking those shades as the distinctive colors of the baseball team in honor of the ruler who gave his name to the first building of the university. The Williams institution has the same outline: the game’s fans got tired of not being able to make out the teams. During the break one of the enthusiasts pinned the purple ribbons from the nearest store to the players’ uniform, thus inventing the alma mater’s symbols.

As for the sports element of this event, the American football is one of the most popular sports in the US that gathers millions of people round the TV screens. It is sincerely loved by the citizens since the 70’s and even excelled the baseball in the number of the aficionados. The amateur football is extremely widespread in the country, especially among the students. Four university stadiums seats around one hundred of thousands of the viewers and every time they get overcrowded. Even the matches between the high-schoolers may bring together more than ten thousands of the fans.

In a nutshell, what is the date of National College Colors Day 2022? It’s August 30 and it’s going to be huge. 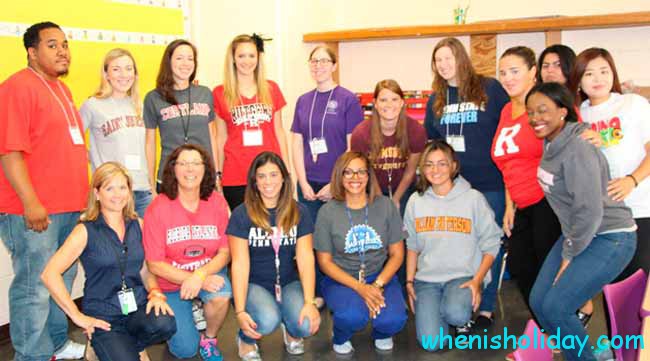 How should you celebrate the holiday? Demonstrating the colors of your house from top to toe!

If you are a student, think of your outfit beforehand with the maximum use of the related tints. Look up on the Internet whether there are some activities being organized at your college, such as the concerts, fairs, or the intercollegiate events. And, of course, make sure you are not to miss this exciting thing called the opening game of the football season!

In case you are an alumnus, August 30 is a proper reason to meet your groupmates and drop by the good old alma mater. A little remark, visit the college wearing the apparel in honor of the holiday (and your university), that’s important.

And for everyone, visit the official page of the holiday (the domain coincides with the name of the festivity), upload your picture, find your school on the list and get the fun and amusing avatars decorated in the appropriate color. Don’t forget to participate in the aforementioned contests; each of the partakers has quite good chances. Overall, pledge your alliance to the college on such a nice date!

Carve a space on the calendar, when is College Colors Day in 2022, and be ready to find the gear of your school’s shades!