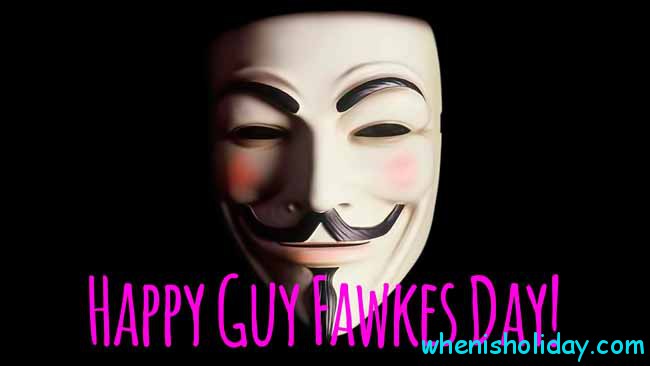 Many people have heard the date of 5-th November for the first time from the Wachowski sister’s movie for Vendetta, based on the cult comic book. Unlike other viewers, almost every British citizen knows when is Guy Fawkes Day in 2022. It’s a big part of a history and a traditional holiday celebrated not only in Great Britain but in some countries that were British colonies. However, it’s not an official national holiday and that is strange, because, until 1959, was a law under which it was illegal not to celebrate Bonfire Night.

The history of the origin of the festival takes us back to the days when Queen Elizabeth’s reign came to an end and a new king came to the throne. Catholics were tired by fifty years of persecution indulged by Protestant queen and looked with a hope to the new ruler. But King James I appeared as firm in his convictions as his predecessor. In a desperate attempt to change something, a group of 13 fanatics decided to blow up the building of the Parliament at the time when the King was there.

One of them was Guy Fawkes. in the matter of fact, he was not the brain of this operation but he was caught in the act while trying to blow 36 barrels of black gunpowder up. King James turned that event into the thanksgiving day. This date should have been celebrated ever since. If you are wondering what day Guy Fawkes Day in 2022 you must know that it is the 412-th anniversary of the perpetrator’s capturing.

Festival got its name Bonfire Night after the king’s orders on across the country lit bonfires to celebrate his miraculous escape from the explosion. Usually, people launch fireworks and light bonfires in this evening. Afterward, in the ashes, people bake potatoes and make toffee apples. Also, there is a tradition to burn the effigy of Guy Fawkes. In recent years it has become popular to burn the dummies representing unpopular politicians. Due to the fact that the holiday is close to Halloween, many people celebrate them simultaneously.

The Gunpowder Plot has left a significant mark in history, overgrown with myths. It was described in the scientific and artistic works many times. There are many theories and researches related to this event emerge from time to time. Let us have a look at some of them:

There is a big chance that the powder which was used by conspirators would not explode at all. According to some researchers, it was old and damp. Several British scientists think that this amount of powder could cause a lot of damage, even raze the building of the House of Parliament flat. It is still not clear how the people known for their utterances against the crown, in general, managed to collect 36 barrels of explosives.

Fawkes and his fellow conspirators could have been framed by king’s men. The way conspiracy was exposed at the right moment leaves room for wondering whether or not it has been done deliberately. The letter that allegedly exposes the conspirators certainly did not have enough information. If this has been done by one of the conspirators, why didn’t he try to save himself by telling that it was him the one who tried to save the King? More likely they did not know about this letter at all.

There is a popular misconception as if Guy Fawkes had been quartered. In fact, he committed suicide by jumping from a ladder to the gallows. He withstood two days of torture but he did not want to die in such horrible manner. He broke his neck but the ruler wanted to send a message and to strike terror into the hearts of all who sympathized with the conspirators. To achieve this goal Fawkes’s lifeless body was actually quartered.

While learning when is Guy Fawkes Day 2022, remember that to this day before the visit of the ruling monarch the Yeomen of the Guard thoroughly search the cellars of the Houses of Parliament. Nowadays nobody expects to find another fanatic with explosives down there, but it is a big tradition. Looking for some strange facts, you may also find out that in the Pacific Ocean there is an island named after Guy Fawkes. It is ironical both because he is known as the villain and the actual mastermind of a plot was Robert Catesby. There were 11 other conspirators in the plot but their names are not as famous.

The mask with mustache — the symbol of anonymous revolutionaries

We should warn you that in some countries, for example in Western Australia, it is technically against the law to wear masks at night, even during the celebrations. But both children and grown-ups wear it as any other carnival mask. That’s why when Guy Fawkes Day in 2022 is on the calendar, a question may arise: “How to make the mask of Guy Fawkes?” They sell it in the stores, but a true rebel would not support the capitalism by buying it. 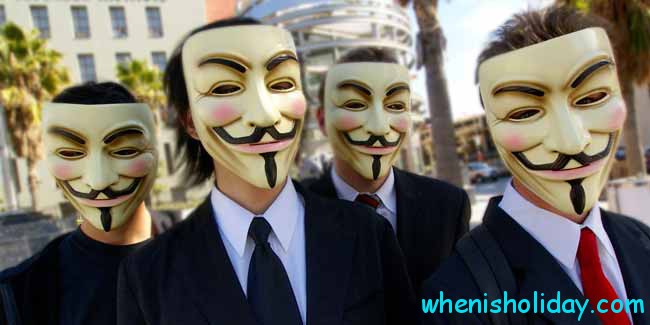 So many people make it themselves. It is possible to make it from paper but also, it may be made in the form of papier-mache. The following materials and devices are necessary:

At first, it is significant to prepare an accurate form of the mask. It might be made by finding as many photos as possible with an image that illustrates the look of the mask from various perspectives: full face, in profile, from below, from above.

The first layer is made without glue. Pieces of paper are dipped in the water and glued on the form. It is very important to smooth paper thoroughly, because air may remain between form and paper. Further, you have to wait for drying (approximately one hour). Excesses of paper should be cut.

To know what is the date of Guy Fawkes Day in 2022, recall the rhyme: “Remember, remember the fifth of November”. For the British citizens, it’s a historic celebration close to Halloween, and Guy is a traitor who should be burned every year. On the other hand, people who fight the government system of their country make Fawkes a symbol of revolution, someone who the rulers should be afraid of. It’s up to you to decide his role in history.

📖 When is National Dictionary Day 2022