When was the last time you opened a dictionary? Not that of Cambridge edition available on the Internet but the real tangible collection of at least ten thousand words? Probably, even if you have one, it’s long covered in the thick layer of dust… That’s sad actually, the fact that we less and less turn to the reference books to improve the way we speak.

Yet once in a while, we are ought to better our word skills as the holiday comes in honor of the respected man who taught us the English language. When is National Dictionary Day in 2022 and who is the one to praise for the festivity? Scroll down the page!

But before, here is another question. Have you ever thought of how the dictionaries came into our lives? Since the 2nd millennium BC, the scribes in Akkad – that was the most ancient land in Babylonia – started to make the Sumerian-Akkadian dictionaries, obviously the first ones in the history of humanity. In those records, they translated the Sumerian signs into the Akkadian language. 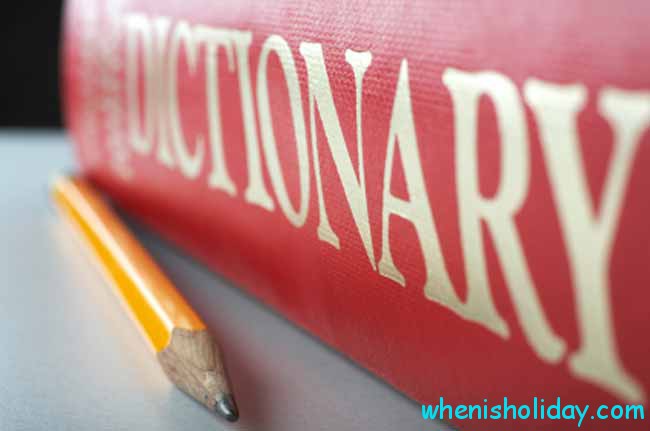 The word “dictionary” was firstly mentioned in around 1225 when the English teacher wrote the list of the words his students should have learned by heart. The list was named as the “dictionarium” which from the Latin meant the collection of words. From that pattern came the name of the English dictionary.

With the invention of the book printing, in the middle of the 15th century, the English words flashed through the pages of the Latin dictionaries yet only as the help to studying of the latter. What’s known to be the first English dictionary was invented in 1552. Finally, in these books, the English word was explained in the English language and only then followed the Latin transcription.

In the end of the 18th century, they saw the light of the day in the United States as well as the person in which honor the holiday is staged. Noah Webster was born in the state of Connecticut in the family of the farmer. After the graduation from Yale University, he worked at the school as a teacher. That’s where he witnessed the obvious shortcomings of the country’s education system. He was especially worried about the English language that was under the press of the numerous dialects and the standards of the British aristocracy.

Some people claim that Webster made the same contribution to the history of American English as Washington made into the fight for Independence. Contrary to the previously compiled dictionaries, he believed that he could come up with the more advanced collection that would clearly demonstrate the peculiarities of the American vocabulary.

Webster spent 20 long years working alone on his great lexicographical opus called An American Dictionary of the English Language – the one we should thank for asking today when is International Dictionary Day 2022. All of the seventy thousand references were written with his own hand on the pages of the book. When it was officially presented, the man was 70 years old!

The definitions of Webster’s work highlighted the differences between the British and American way of speaking, just as he’d planned. The author added almost ten thousand words that were never mentioned before. He was really proud of the quotations of the prominent American individuals which he used for illustrating the articles.

Webster’s talent had a huge impact on the American spelling consolidating its distinctive nature. Thus, we got to know the way of writing “wagon” instead of “waggon”, or “tire” instead of “tyre”. Another novelty was the transcription.

Unfortunately, the wordsmith didn’t live till the days when his book became the respected member on the shelf of every American family while his last name turned into the synonym of the word “dictionary”. The whole world met the Webster’s offspring only after the rights were transferred to the brothers Merriam in the 19th century. Since then, the book is being published under the name of Merriam-Webster.

We don’t know who invented the holiday in honor of Noah Webster yet we do know why!

What does National Dictionary Day mean? First of all, it means the aspiration to increase the vocabulary of the people.

The modern gadgets definitely make our lives easier. Keeping the many-volumed sets is not practical when you have the iPhone in your pocket going online at your whim. Nevertheless, the level of the literacy gradually decreases. How can we set a new fashion for broadening our language and collate it with the standard? Probably, by letting people know what day  World Dictionary Day in 2022 falls on and what it’s all about.

The significance of the dictionaries can’t be overestimated. First, they enhance our minds. Those books expand the vocabulary, introduce us to the lexicological norms, and prevent from speaking in a grammatically incorrect way. Not only do they bring the lucidity but also make the life more understandable. Inside, we can find tons of the useful information. In a sense, the dictionaries are the main books with the help of which we can comprehend the other books.

The essential function of these references’ collection is the preservation of the knowledge. Human’s brain is not that mighty to remember such amounts of information and they might be easily forgotten. By the means of the dictionaries, the mankind accumulates the experience and hand it down to the next generations.

The language is always changing, especially in the Information Age. The experts say that the youngsters reading the classic literature just do not catch the meaning of the various words. The older folks struggle with the meaning of the today’s social media messages. One of the most important missions of the dictionaries is to translate the language into the same language yet sounding clear to all people. 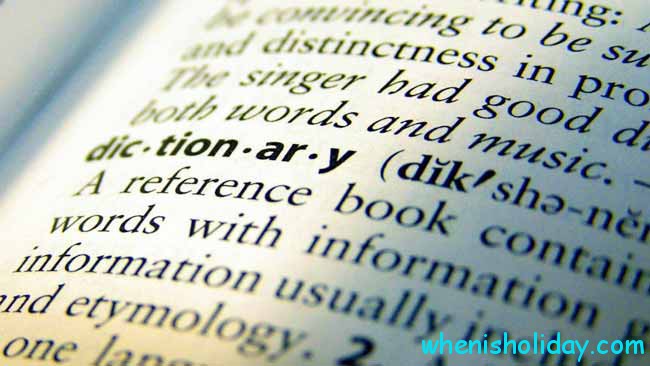 The dictionary is the collection of words accompanied by the commentary that describes their structure and the way of use in the speech.

Interestingly, over the period of its existence, the dictionaries were mostly referred to as the professional pieces of literature and weren’t that popular among the grassroots. The all-embracing honor for the reference books rose in the middle of the 20th century when it became evident that it’s not only a book but also the history. In particular, the research carried out in Britain during the 90’s showed that 90% of the citizens had the dictionaries on their tables. The number was even more than that of the Bibles (80%)!

With time, there were the whole dictionary “families” created made up by the groups of the authors. The most recognized ones in the US are those of the Random House Webster and Barnhart. In Great Britain, it’s the publications of the Oxford, Collins, and Longman.

What is the date of National Dictionary Day 2022? It annually takes place on the birthday of Noah Webster that is October 16!

In fact, on that day you are encouraged to do as much good as you can for your vocabulary. First of all, get the dictionary if you’ve never had one before.

Sign up for the various mailings like “Word of the Day”. They will help to expand the boundaries of your language. What about the today’s word – let it be “limerence”. Have you heard of it earlier?

Invite your friends and play the good old Scrabble! But don’t use the most common words, think of the rare ones. You also have the chance to look up some in the dictionaries.

Mark in the calendar, when is Dictionary Day in 2022, and praise the Father of the American English together with improving your language!